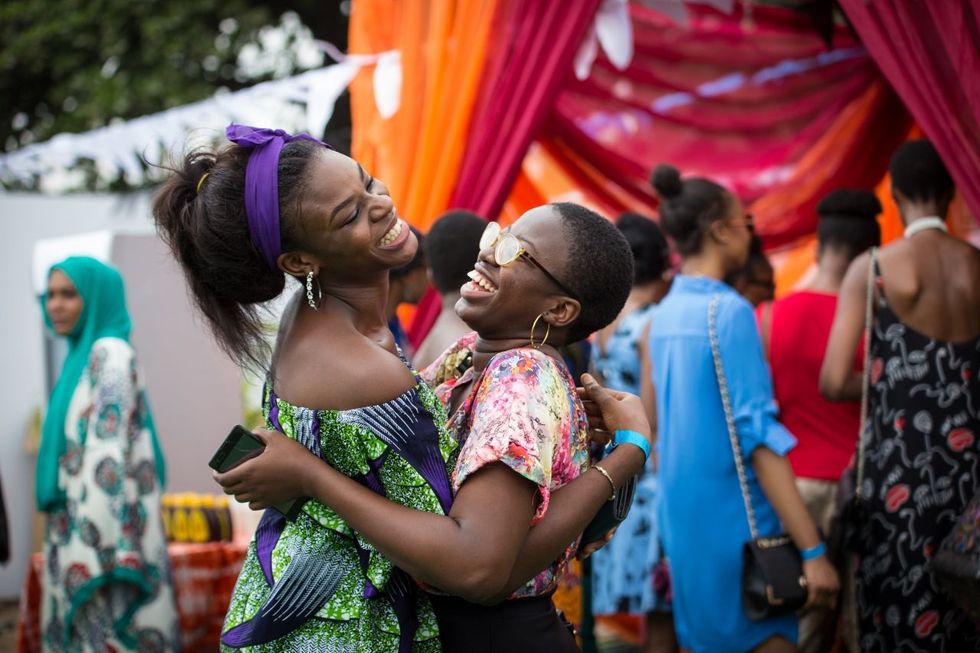 A recap of She Leads Africa's first SLAY Festival held in Lagos.

During the week, the Nigerian Railway Corporation Compound in Ebute-Metta, Lagos, is usually a serene relic of the city’s former railway system, but on Saturday, January 21, the formerly empty compound was full of Black Girl Magic, thanks to She Leads Africa.

For the organization’s first SLAY Festival, over 1200 guests attended enjoying the lineup including TV presenter and actress, Zainab Balogun, award-winning director, Kemi Adetiba, rapper, M.I, and a host of other celebrities and influencers offering insight to guests about timely topics.

The daylong event began with an early morning women in tech breakfast session, which allowed attendees to learn about ways to build and sustain a career in tech. She Leads Africa’s focus on funneling more women into Africa’s burgeoning tech industry is a hallmark of the organization and the tech breakfast at the SLAY festival was an opportunity for guests to engage intimately with tech professionals and leave with valuable information.

After breakfast, the day kicked off with full force. Before the succession of masterclasses and mainstage events lined up for the day, guests could choose between a coding class with expert coders from Andela, a running workshop featuring legal and financial advice for small business owners from lawyers, strategists, marketers and technologists about how to grow and leverage their business, and free access to the provided manicure bar for premium ticket holders.

One thing that all attendees could agree on was that the SLAY Festival was a celebration of local Nigerian businesses and brands. From haircare brands like Kinky Apothecary to shoe brands like Keeks, the festival was intentional in its purpose to connect its attendees to high quality homegrown brands and help the 44 local businesses present build a steadfast following. In order to do this, the festival acted like an incubator by showcasing a number of diverse brands to attendees, and it worked. Guests left with bags in tow and businesses—many of them owned by African women—tapped into a relatively new audience.

The festival’s mainstage saw a host of speakers who talked about everything from how to build a long lasting professional and personal partnership, to changing gender roles and being a man in the 21st century. On air radio personality and newly minted best selling author, Toke Makinwa talked to the audience about using social media to build a successful brand, while Adetiba dropped advice on how to build a career (and get paid) in the media industry.

Two of the day’s most enthusiastic panels included the “Being A Man in the 21st Century,” which featured M.I and Audu Maikori, CEO of Chocolate City Group, and “Building a Winning Partnership” with power couple Tara and Fela Durotoye. Both panels disproved the idea that events like the SLAY Festival are exclusive to women. In an interview with OkayAfrica, She Leads Africa co-founder Yasmin Belo-Osagie noted the importance of including men in the conversation about gender roles and the need for gender inclusivity in the corporate world.

“When men are brought into these discussions, there is a sense of accountability and it shows them that a lack of inclusivity of women in leadership roles is not a benefit, but truly a detriment,” Osagie says.

To close down the day, She Leads Africa collaborated with Cointreau to provide a chill out lounge, which featured performances by musical artists Falana and Funbi. Although She Leads Africa has hosted their entrepreneurial bootcamp, SheHive, in cities like Accra, New York, London, Johannesburg and Lagos, the SLAY Festival is one of a kind experience even for the dynamic organization. It’s only fitting that the SLAY Festival made its debut in Lagos.