Signatures Magazine Is Proudly Putting Ghanaian Creatives On The Map 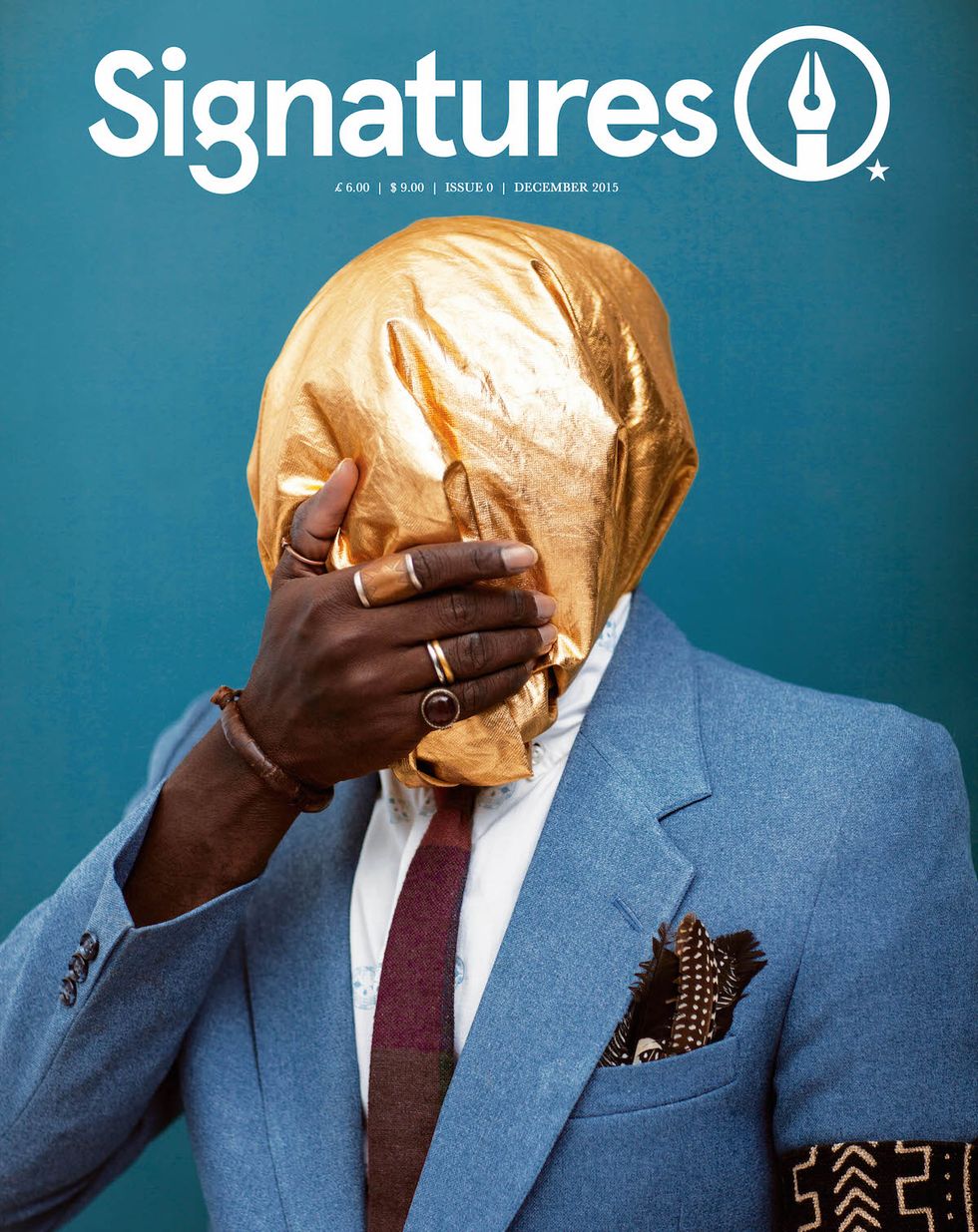 Jason Nicco-Annan takes us behind-the-scenes of Signatures, a dope new magazine by Ghanaians for Ghanaians.

Skyping with Jason Nicco-Annan is like being transported straight to the heart of Accra cool. When we chat, it’s two days before Ghana’s 59th Independence Day. The 28-year-old Ghanaian is deep in preparation for a West London pop-up shop launch event.

Jason and Julian Nicco-Annan, 30, are the brothers behind Signatures, a new bi-annual print magazine highlighting emerging and established voices in the Ghanaian creative scene.

Their main plan, he tells me, is connecting the diaspora to the continent and seeing how the two can inform each other.

For the Nicco-Annan brothers, the diaspora hits especially close to home. Born in London, their family moved back to Accra in 1993, when Jason was six and Julian was eight. Julian’s been back in the UK about four years and Jason a year-and-a-half.

In addition to working in finance, the elder Nicco-Annan brother is a producer who you may know as DJ Juls.

Jason started out as a graphic designer and filmmaker who in 2012 found himself working at Dust Magazine in Accra. What was supposed to be a written interview with one of his idols, the Toronto-based illustrator and animator Gyimah Gariba, ended up seeing Jason take out his “crappy Canon 550d camera”—the same camera he uses today, for the first of many video interviews to come.

That was how Signatures was born. “It was just a random idea that was supposed to be for something else that didn't end up being used,” Jason tells me. “I liked the idea of the name Signatures because every single artist has a signature statement. The form of the video was that it would open with the person's signature in black,” he says. During a summer holiday in 2012, Jason filmed a couple of more creatives and shot a few more episodes. “Nobody was doing video content in Ghana at the time," he says. "There was a lot of focus on the more established creative industries in media–Nigeria, Senegal, Morocco–whereas in Ghana there wasn't that much video content.”

Jason then became a copywriter and Signatures was put on the backburner. That’s when Julian comes in. “Because Julian has always been the more practical resource-based person,” Jason tells me. “I’m more of a creative and Julian is more of a results person,” he says. At the encouragement of Julian, the Nicco-Annans revived the project and started to shoot videos again. “We also started brainstorming and thinking about how we could evolve the brand and improve on what was already being done.” That’s when they decided to make a magazine in which they’d release two issues each year and put out video content in between issues. “That's how Signatures magazine came out. Basically the same kind of brotherly camaraderie that we had when we were kids was revived again when we sat down and started brainstorming and putting things together.”

Julian and Jason Nicco-Annan at a park in Stevenage, Hertfordshire, 1991. Courtesy of the Nicco-Annan brothers.

The magazine recently made its print debut with an inaugural 100-page issue featuring the likes of Chicago-based photographer Lawrence Agyei, Nigerian fashion designer Bubu Ogisi, the sights and sounds of Accra in photos as well as Ghanaian photographers Francis Kokoroko, Kwasi Darko, Percy Osei-Appiah and more.

In the conversation below, we chat with Jason about the launch of Signatures and his take on Ghanaian creativity.

Alyssa Klein for Okayafrica: What sort of people are you profiling in Signatures?

There's a magazine called Drift, for example. It's a coffee magazine, but it's not just about drinking coffee. It covers a whole bunch of factors that influence coffee culture, like business and travel and agriculture. One issue focused on milk for instance, because milk is obviously a very important ingredient for coffee, and if the price of milk rises that affects coffee.

Those kinds of connections, or degrees of separation, are what we’re trying to do with Signatures. We're looking at the creative African industry as a whole from a Ghanaian perspective. We believe that what happens in South Africa, Nigeria and Senegal and all the other countries can influence and inform what’s happening and what can happen in Ghana… so to actually answer the question, the main goal is to be a creative showcase for Ghanaian artists but with a focus on creative Africans from both the continent and the diaspora.

Who is your intended audience?

Our intended audience is like-minded creative individuals. We are targeting people who are passionate about creativity, but not just passionate about the end results but readers who are obsessed with the process and influences behind an artist’s creative pursuits. Our demographic is between 16 to 35. Obviously we want to target young people who are thinking of being creative, being artists and illustrators and writers, but we also want to target influencers in the creative community and people who are curious about what’s happening on the continent, but from the perspective of the artist and the challenges that they face.

If you had to pick three things happening in Ghana right now, what would you want the world to know?

The first thing is the spirit of community. The Ghanaian creative community is very DIY at the moment. One of the biggest scenes within the creative community is the spoken word scene. Spoken word has given people the opportunity to take up space in terms of live performances… It's all kind of like a cycle, so when you have an art form that is created to fit a live context, that creates an audience, and then the audience is able to go out and do other stuff as opposed to what you usually do on a weekend. You have places to go, you have people to see, you have a fan base and all of those things. The community and the spoken word community is very very big.

There’s also a huge collective of photographers and graphic designers. People like Ofoe Amegavie, Francis Kokoroko, who shot our cover actually. People like Charles Lawson, who worked extensively on our magazine. There are just several collectives of photographers. There are also a growing number of collectives; people who are just catching on to the idea that there’s strength in numbers.

This month is huge because of the launch of Gallery 1957 [in Accra]. The opportunity for Ghanaians to exhibit their art is being elevated and being taken a bit more seriously. So there's a potential for curators and gallerists to be taken seriously. Definitely the idea of arts in a space is very very interesting.

Have you noticed any big trends with Ghanaians in the diaspora?

I think a lot of creatives are looking to collaborate with artists back home. A lot of poets and writers are taking the opportunity during holidays and during travel to go back home and try to situate themselves in the community. It's such a buzz and it's so exciting that you don't want to be left out…

I know a lot of filmmakers and photographers and writers who travel back home, and then eventually start pushing their departure dates back, because they just want to stay and be a part of the community; it's hard for some of them to leave! A lot of creatives are doing as much as possible to situate themselves in the community and play a part and play a role in the scene.

One thing that we definitely want people to know is it's a very DIY project. Even in Ghana, because we don't have that much of a publishing industry, when people think about magazines, they think about the glossy mainstream types like ELLE and GQ, magazines with fancy layouts and editorials. Whereas in the UK, it's just very independent and very punk and skate-driven. People are doing their own thing, and it's very specific to a target audience and specific to a subject matter.

Julian has his insights with music and business, I have my experience as a graphic designer and writer, and so we're all leveraging our networks and looking at how we can create a bigger network and showcase for the most part. We're just playing our part essentially. And that's definitely something that we're really really passionate about.

Check out a preview of Signatures Issue #0 below. Order your copy here.