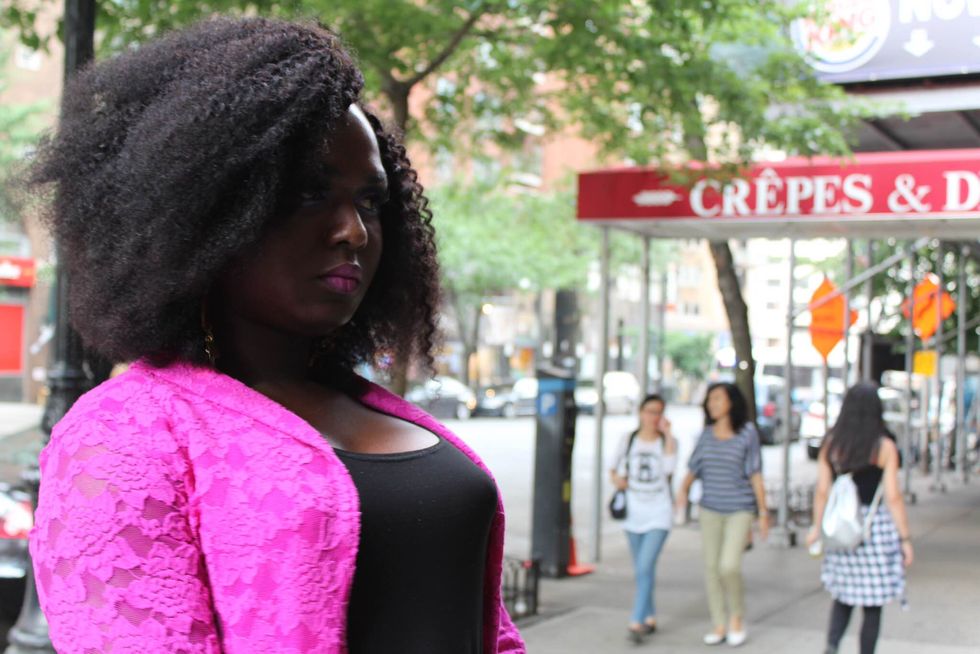 Filmmaker Noni Lawal on what it means to be a Nigerian trans-woman in New York and the fight for LGBT rights in Nigeria.

“I don’t see a place in Nigeria for someone like me,” says Noni as she reclines on a bench in New York’s Bryant Park.

Gendered male at birth and named Habeeb Lawal, Noni Salma is a 30-year-old Nigerian-born trans woman living in New York. I met her on a brisk day in May, clad in what she later refers to as her “Olivia Pope look”—an orange pea coat, tapered jeans, floral mules, and a Pope like camel tote, she continues, “growing up in Nigeria, I never thought transitioning was a possibility, because I grew up with the idea and expectation of what gender roles are and what gender expectations are, so it was kind of ingrained in my head—this is what it means to be a boy and this is what it means to be a girl.”

“I had people telling me that you’re a boy even though my body was telling me differently. I didn’t particularly have a language for it, but I knew what I was feeling, and I knew that I wasn't quite comfortable being a boy.”

In 2014, Nigeria joined the list of 33 African countries to criminalize same-sex encounters, marriages, and civil unions. According to Nigeria's Same-Sex Marriage Prohibition Act, same-sex marriages and cohabiting relationships between partners of the same sex are punishable by a maximum of 14 years in prison. The Act also targets allies of Nigeria's LGBT movement by stipulating that anyone who “registers, operates or participates in gay clubs, societies, and organizations" and shows “direct or indirect public displays of affection for same-sex couples" can face up to 10 years in prison. What the law fails to clarify is its effect on Nigeria's transgender and gender non-conforming community.

Noni's marooned lips are a telltale sign that I am not her only engagement of the day. When I ask, she acknowledges that her short film is being screened that night at the NYLA International Film Festival. The film is called Alibi and follows what happens after a man with a sleepwalking habit is accused of murdering his autistic daughter. Like Noni’s former films, Habeeb Lawal is credited as the film’s director and producer, but unlike her past projects, this film veers off her LGBT-themed productions into the realm of psychological drama, a deviation she makes sure to point out isn’t much of one.

“As a filmmaker, I’m interested in the truth,” says Noni.

“My goal as a filmmaker is for people to see themselves, and if people don’t directly see themselves, I want them to learn something about the human experience that they didn’t know. Even with this film [Alibi], I’m still looking at the truth, but unlike my other films, I’m asking the viewers to determine what the truth is.”

In Nigeria, the only legal inference to the country's trans and gender non-conforming citizens is the Penal Code Law or Act, which is applicable in the Northern part of Nigeria. According to the Penal Law in Kano, anyone who biologically presents as male, but "behaves or dresses in a manner which imitates the behavioral attitude of a woman” can be found guilty of an offense and sentenced to 1-year in prison or charged a fine of N10,000 or both.

According to Mike Enahoro Ebah, Managing Principal of Enahoro & Associates, an Abuja-based law firm, even though the Same-Sex Marriage Prohibition Act might not directly target the trans community, loopholes, and interpretations of pre-existing laws can have unfavorable effects on Nigeria's transgender and gender non-conforming citizens. Ebah notes that according to section 42 of Nigeria’s fourth and most recent constitution, no Nigerian citizen should be discriminated against because of their ethnic group, place of origin, sex, religion or political opinion. The clause in the law, which focuses on gender-based discrimination should provide legal protection for trans men and women living in Nigeria, but that is not the case.

Under section 40 of Nigeria’s Births, Deaths ETC Compulsory Registration Act of 1992, official records maintained by Nigeria’s National Population Commission, which includes birth, life, and death records of Nigeria’s citizens cannot be altered, except for clerical errors. Unlike trans men and women living in South Africa and Botswana, a Nigerian trans man or woman is not allowed to legally change their gender on their birth certificate or other official documents, which leaves them unable to represent themselves as they choose.

"The T in LGBT is absent to our law in Nigeria," says Michael Akanji, Director of Programs at TIERS Nigeria, a Nigerian-based nonprofit that works to protect and promote the human rights of Nigeria's LGBT community.

"If you look at it legally, the idea of a sex change or changing your legal papers isn’t really applicable in our country. People are only addressed by their biological sex, rather than their preferred gender, and this affects the way they are perceived in the community and society at large."

Of her childhood growing up in Nigeria, Noni says, “It was always choking, I could never really be myself.”

“I struggled because I wasn't sure that people saw me, the real me. I saw me, but I don’t think that people did,” she continues.

“It’s a powerful thing when you get to be yourself.”

The evening approaches and Noni and I leave Bryant Park and move towards Times Square. As I walk behind her, I think to myself that if Habeeb had an unsteady gait, Noni possesses a permanent strut. With one foot in front of the other and shoulders squared, she maneuvers the tourist attraction with ease, turning her cornrowed head to answer every question I pose as we make our way through the mob. A former New York Film Academy student, Noni sees New York as her home. When asked why she loves the city, she alludes to its grit and perseverance, a trait she finds endearing.

Speaking of her experience as a trans woman living in New York, Noni says, “my friends, my neighbors, people that live around me have also transitioned with me.”

“These are people who knew me before I transitioned and to me, that’s very powerful. It feels like people are kind of embracing me.”

Even with the city’s allure and her newfound support, Noni acknowledges that New York can still be a dangerous place to be transgender.

“I don’t want to sell a Cinderella trans story. Trans women get ridiculed and hurt. Trans people are very strong.”

She recants the tale of a friend and fellow trans woman, Pearl Love, who was assaulted on the subway as an example of what trans men and women in New York often experience.

Less than a year into her transition, Noni credits celebrities like Laverne Cox and Caitlyn Jenner as inspirations and touchstones for her transition process, and in the same vein as those before her, Noni hopes that she can provide some solace for trans and gender non-conforming people living in Nigeria.

“It’s always important to be visible, that way you give others hope and you make them realize that it is possible,” says Noni.

“I would never have been able to transition if I stayed in Nigeria, but I want to show people that if I can come from that environment and get to this point they can too.”

At a little after 7 p.m., we arrive at the Producer’s Club for the Alibi screening. We walk up the narrow staircase and enter a bar with two black leather couches. The Weeknd’s hit song “Earned It” wafts through the speakers and I see Noni mouthing the words.

“Who is this?” she asks appreciatively as she generously reapplies her lipstick.

As castmates and organizers make their way up, we are moved into a small theater where the screening will be held, and I watch Noni shift into her role as a producer, hugging castmates and posing for photos. Since shooting for the film wrapped, the screening is the first time some of Noni’s castmates have seen her post-transition. During a panel discussion about the film, a male castmate accidentally misgenders Noni, and the fleeting moment is awkward for everyone, except Noni.

As we make our way through Times Square after the screening, I ask her about the incident and her castmates reaction to her transition

“I know his intention wasn’t bad,” she says as we walk in the cool air of the night.

“People say that my transition was brave and courageous. I always get a lot of adjectives to compliment the decision, but I just tell people that I did it because it was a life or death situation for me. I say this in the sense that I just couldn't imagine any other way that I could live a good life.”

During the day, I ask Noni to tell me how her life is different being in the United States, I ask her what kind of future she imagines for herself living in New York that she couldn’t see when she lived in Nigeria as Habeeb.

She purses her red lips before she answers, “Before I decided that I would go ahead with the transition, I went through a moment of emptiness. I was just empty, and I didn’t know why and I almost committed suicide,” she says.

“I had no purpose in life, and I couldn’t imagine the next 50 or 60 years as a man. I couldn’t see my future, now I do. Now I say, I might meet some nice guy and get married and have kids.”

Ashley Okwuosa is a writer and journalist who writes about pop culture, politics, new media, social issues and everything in between. She is a 2015 graduate of Rutgers University with a degree in Journalism and Women's Studies. Follow her on Twitter @ashleyokwuosa.