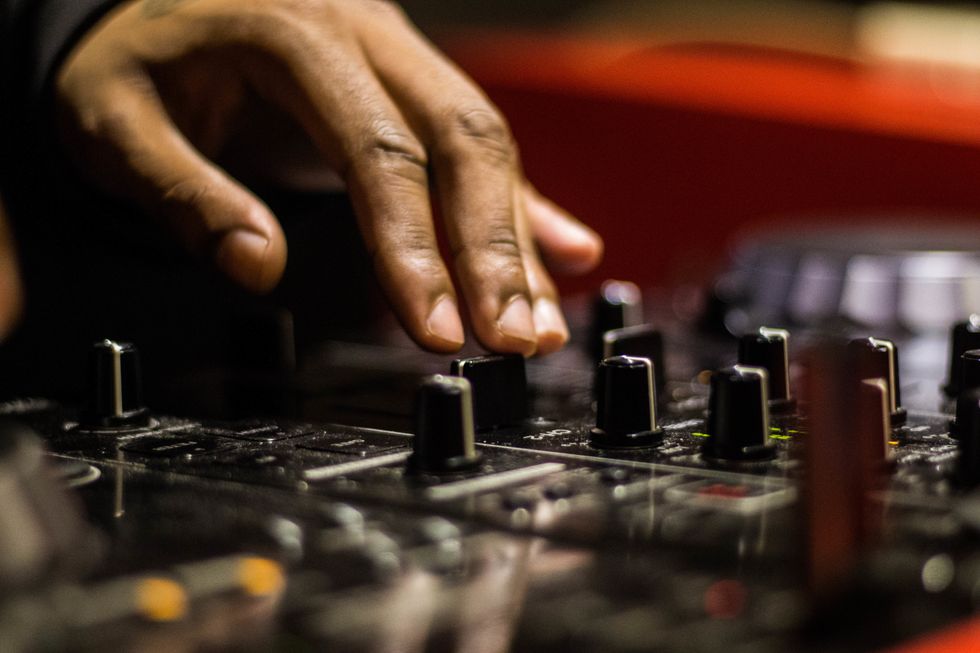 SA hip-hop DJs have gifted us some of the country's most outstanding collaborations. We highlight 30 of those that have had a huge impact on our ears.

DJs play a huge role in (South African) hip-hop. They introduce fans to new exciting rappers; for instance, Nasty C and YoungstaCPT, who are stars now, were first heard on a mainstream level on DJ Switch's "Way It Go."

DJs keep their ears on the street and are thus the right people for label heads to speak to about the next rapper to sign; a few days ago, Universal Music Group signed up-and-coming rapper 25K, and it was revealed that DJ Vigilante was the one who made the label aware of the MC's existence.

DJs have curated collaborations we could have only dreamed of—DJ Hudson put Khuli Chana and Mawe2 on the same song for "Alcohol and Problems," Vigi placed Nasty C, AKA and K.O. on the same beat on "Bang Out."

DJs have curated some of the country's greatest posse tracks and collaborations. They have thus maintained the spirit of competition among rappers—think of the sparring between AKA and K.O. on "God's Will" and the intergenerational collaboration on DJ Switch's "Now or Never." DJs are low-key preserving lyricism as they always put rappers out of their comfort zone, where nothing else but their bars matter.

In the last few years, South African hip-hop DJs have gifted fans with some of the country's most outstanding collaborations, and below, we highlight 30 of those that have had a huge impact on our ears. From golden oldies like DJ Nana's "Let The Beat Go" to present-day classics such as DJ Switch's "Now or Never," DJ Citi Lyts' "Vura" and DJ Capital's "Skebe Dep Dep," we bring

Note that the list is in no particular order, and only songs released from 2009 and later were considered.

Listen to these selections in our South African Hip-Hop DJs playlist on Apple Music and Spotify.

An iconic collaboration of the old and new school, that boasts monumental verses. It was Nasty C and YoungstaCPT's official introduction to the game, so they had a lot to prove. And they were rapping alongside one of the greatest in the country.

"God's Will" is an undebatable classic. Vigi got two of the hottest rappers of 2013 and had them sparring over a pristine instrumental produced by K.O. himself, and the result was two of the rappers' most memorable verses.

A moment of a song. "Now or Never" got the country's attention, and it was just based on beats and rhymes, no catchy hook or gimmicks. "Now or Never" was a wakeup call to the game, a reminder that bars will always matter.

"Keep Debiting" was part of Reason's winning streak. He was still new to the mainstream, and was murdering everything living. His verse on here is relatable—he skilfully detailed a relationship most young people have with money, and it was over a beat tailored for the club.

Nasty C was fast proving himself as a potent lyricist, and what better way to test him than to place him alongside AKA and K.O., who were just untouchable in 2016. "Bang Out" is another monumental combination of rappers that one had grown to expect from Vigi, who has a sharp ear for lyricists who will sound great together on a song.

"Vura" is one of the best South African songs of all time, across all genres. The beat, an outstanding piece of art, was produced by three of the country's best producers—Ruff, Lunati and Bizboy. And Sjava laced it with a memorable verse and hook, amd Saudi spat one of the best verses of his career.

Who could have dreamed of hearing Mawe2 and Khuli Chana in the same song? "Alcohol and Problems" is both mellow and catchy, addresses a serious life issue, but doesn't alienate its listener. "Alcohol and Problems" is proof that DJs don't always put together club bangers, but can craft introspective songs for self-reflection. And Khuli Chana didn't have to go this hard.

The thing about mixing hip-hop and kwaito is that it seems easy, but not everyone can do it well. As well as Major League did with "The Bizness." The song captured the spirit of kwaito, while still remaining hip-hop. An iconic combination of rappers who have as much in common as they are different.

On "I Don't Know," DJ Speedsta roped in the leaders of the new wave for an auto-tune heavy fire starter that gave us a memorable production and hook from Zoocci Coke Dope. DJ Speedsta keeps his ears on the streets, and this song is an indication, as he casts some of the most notable artists from SA's new wave, alongside the Godfather of new school rap in SA, Da L.E.S. All three artists have since grown to be notable names in SA hip-hop.

DJ Milkshake “Living on the Edge” (ft. AKA and George and George Avakian)

"Living on the Edge," an anthem for the hedonists, was built on a tangy instrumental that was laced with a catchy hook by George Avakian and fitting verses from AKA, who was showing growth as a rapper. George's verse was also lovely, though you might be reluctant to agree. We get it.

When Naija and Mzansi get together, it's always a spaz fest. The beat for "Bae Coupe" is an intimidating banger, and gets laced by potent verses from Ice Price, Emmy Gee and Riky Rick, with the latter's verse being the song's brightest moment. Riky flips the song's concept around, and reflects on how we are slaves to capitalism, over-drinking, spending less time with our loved ones, while chasing the dough.

No DJ rides for the new wave than Speedsta. On "Mayo," he gathered the future of the game, who've all grown to be stars in their own right. Strong verses from Shane Eagle and Tellaman and a career-defining hook from Yung Swiss, and a warm R&B-leaning beat from Gemini Major, are what make "Mayo" an era-defining song.

DJ Citi Lyts gathered the then-growing Ambitiouz Entertainment roster, and gifted the game with a laid-back chill anthem. Emtee owned the song with a rock-solid hook that eclipsed Fifi and B3nchMarQ's verse.

Beat Bangaz is a trio consisiting of legendary DJs E20, DJ Azuhl and DJ Ready D. "Bo Kaap" is a moment in that the OGs collaborated with the leader of Cape Town's new wave of rappers. YoungstaCPT maintains a uniform rhyme pattern and speaks his truth, from being ostracized by the game to politicians' incompetence. No waste moment on here, just a great combination of a beat and raps.

"We Ain't Leaving" is a club banger with a fitting message—Tido and his party people ain't leaving till the sun comes out. Nothing to write home about lyrically, but Tido owned Anatii's pulverizing instrumental and was complemented by a catchy hook that will stick to your head for hours.

Over an eardrum shattering instrumental from Tweezy, Miss Pru throws a celebration with her girls declaring their dedication to chasing the paper. "Isaga Lam" boasts solid rap verses from Gigi Lamayne and Nadia Nakai, a sing-songy appearance by Londie London, and an effortless from LaSauce, channeling Rihanna.

By now, you should know, you can never go wrong with Emtee on the hook. On Maphorisa's "Kemosadi," he delivers yet another solid hook verse, and so do KLY, Zingah and Maggz.

"Bhathu" is a demonstration of Emtee and Saudi's chemistry, as well as their skill—their unique approaches to the instrumental ensure you feel both of their presences. Both rappers spit potent lines, with Saudi spitting such venom as, "I'm running around with the G.O.A.T, ngathi umgidi wami ekseni."

On "Sgelekeqe," Vigi features kasi rap royalty on Ma-E, Maggz and Pro, and the song comes out as gully as you'd expect. "Sgelekeqe" is an anomaly; it's both for the streets and the club, with the three lyricists lacing the bass-heavy beat with raw scripts for the heads.

Kwesta and Makwa are one of the greatest rapper-producer duo out now ("Spirit" and "Vur Vai"). Makwa can also drop killa hooks, and on "Biskop," he does exactly that, while Kwesta delivers a verse that proves he's one of the greatest South African rappers of all time. He chooses to complicate the beat to allow for him to use his skills to maneuver its bends and obstacles. He really brought his A-game on here.

About 10 years ago, DJ Nana roped in three of the game's hottest rappers for a display of unmatched skill over an instrumental that leans towards boom bap. "Let The Beat Go" sounded sophisticated enough for Jabba to put it on his monumental 2009 album Dumela. The song's video features cameos from the likes of Flex Boogie, MarazA, Lee Kasumba, Lil Frat and a few more.

"Skebe Dep Dep" is catchy enough for radio and the casual listener, but lyrical enough for the fan of bars—the song features some of the country's most gifted lyricists—Kwesta, Reason, KiD X, YoungstaCPT and Stogie T, and, as expected, every rapper brings some serious heat.

A solid raga-inspired hook by Gemini Major and two great verses from Reason and KiD X over a pulverizing bassline. "Father Figure" doesn't have a lot going on, which makes it accessible and a perfect listen for both your headphones and the club's speakers.

Ms Cosmo and her collaborators Rouge, Sho Madjozi and Moozlie turn Hurricane Chris' 2007 crunk hit into a modern trap banger, and it's just as catchy as the original. Every verse on "Ay Baby" is impactful, as all three MCs stick to their unique styles, and together form an immovable force of nature.

Yanga, Emtee, Tshego and Cassper Nyovest ride a menacing bass-laden trap beat on "Phanda Mo," each delivering verses that sound like all rappers were trying to out-rhyme each other, and you know than always translates to a great listening experience. "Phanda Mo" is a hustler's mayhem, and is probably the first and last time you'll ever hear Emtee and Cassper on the same song.

"Never Fall" is perfect. It's Emtee in his truest form, and he shares the beat with no one, but himself, as he serves a solid hook and great rap verses, vowing to be on top of the game forever. "Never Fall" is proof that DJs are capable of more than just club bangers and street anthems.

"Usabani" is an indication that kasi rap will always thrive. Both Red Button and MarazA both serve great Zulu and Tsotsitaal verses, with MarazA combining the sensibilities of modern hip-hop with his kasi rap roots in his show-stealing verses about backstabbers and haters.

Shekhinah, as a producer herself, has a great ear for beats, and not to mention her interpretation is always on point. On "On It," she lays effortless vocals over a pounding ominous instrumental by Tweezy, to gift DJ Sliqe with one of the greatest songs of his career.

Once again, DJ Speedsta gathers the new wave, this time around, alongside the godfather of new school rap in South Africa, Da L.E.S. The song consists of a diverse list of artists who blur the line between rapping and singing, and it's a serious vibe.

"Bay 2" sounds like an AKA joint (think "All Eyes on Me," "The Baddest" and L-Tido's "No Favors"); it combines kwaito and hip-hop, and features two of Supa Mega's secret weapons—Yanga and JR, and as a result, the song sounds as focused as Mega's own songs.

Listen to these selections in our South African Hip-Hop DJs playlist on Apple Music and Spotify.