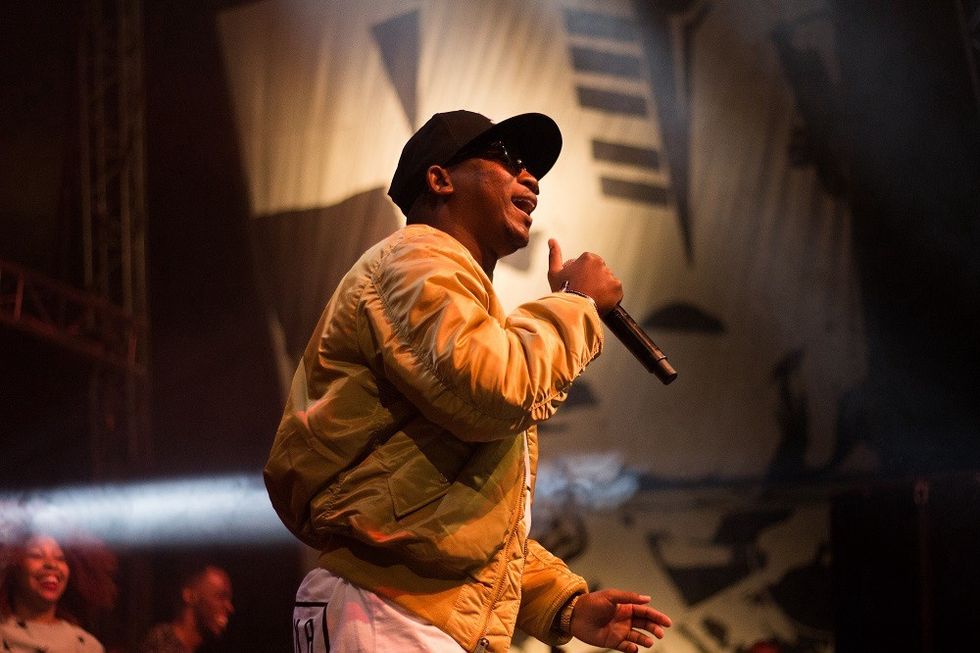 Khuli Chana is sharing unreleased songs that are better than what your fave will release in the future.

South African rapper Khuli Chana is one of the best to ever do it. He raps with an unmatched flair, natural swagger, and a high-precision flow. His dexterity is impressive, as he raps in both English and Setswana, and is vicious with both. Can we also talk about those catchy hooks the man has conjured for both his songs and other artists'?

Since his days with the group Morafe, and in his flourishing solo career, that spans two solid albums (MotswakOriginator (2010), Lost In Time (2012)) and an EP (One Source (2016)), Chana has been rapping circles around your favorite rappers for ages.

He's currently busy with One Source, a multi-disciplinary project with Absolut Vodka that has seen him traveling the content. While busy with One Source and running his label, My Throne Records, the MC decided to unleash some unreleased bangers from his vault.

In an ongoing series titled #UNRELEASEDTHURSDAYS, the motswako legend and pioneer has released several songs, each followed by visuals.

My personal favorite from this series has to be "Maje," produced by Pretoria-based legendary producer Trompie Beat Mochini. The MC devours the instrumental, which leads with a buzzing bass line, with his customary cadence, and throws some kwaito-influenced sauce in the adlibs.

Khuli's flow is an instrument of its own. In the age of trap music, where autotune hooks and catchy beats make hits, he's one of the few mainstream rappers who will turn a boom bap instrumental into a chart topper—remember "Tswa Daar," "Never Grow Up," and a few others? "Maje" is another instance of his flow and presence making a song. The song has potential to be a radio hit, and you don't hear any 808 or auto-tune—a rarity in 2018.

"Everything," which has trap sensibilities, is produced by up-and-coming Cape Town-based producer Ludick Beats, who's a mentee of the legendary producer Hipe, also from Cape Town. On "Everything," Chana proves that his flow is dynamic, and is magical over any type of instrumental.

On "Anjos," yet another song from the series, Chana lets My Throne Records signee Maglera Doe Boy shine, as he gives him two verses. Maglera is poised to be the next big thing for motswako, as the subgenre hasn't had fresh blood in a few years, since Cassper Nyovest became a superstar. And what more does he need if he has the guidance of one of the most potent and successful rappers in SA?

Alongside HHP, Khuli Chana (and his crew Morafe) is one of the founders of motswako, the SA hip-hop sungenre from Mafikeng in the North West province. Motswako, which is characterized by English and Setswana lyrics, managed to bring fun to hip-hop at a time when it took itself too seriously for its own good in the mid-2000s. Motswako fused hip-hop with kwaito and house, a trend many rappers would take years to catch on to.

Motswako is one of the most successful subgenres in SA hip-hop—collectively, it has probably sold more records than every other subgenre there is. Khuli Chana and HHP were selling gold and sweeping awards shows before rappers could dream of it in the early 2010s.

Hopefully, Chana is getting rid of these old songs because he's working on a new album. Seriously, the game needs it.

On the finale of The Hustle Season 2 , @scoopmakhathini asked me who I'd like to work with and I said @Manu_Worldstar and we finally made it happen. This guy is coming for the industry and no one is ready.
Let's get this weekend started the right way. 🥂🍾 pic.twitter.com/29BEFUdFBh
— #MotswakOriginator (@KhuliChana) June 28, 2018