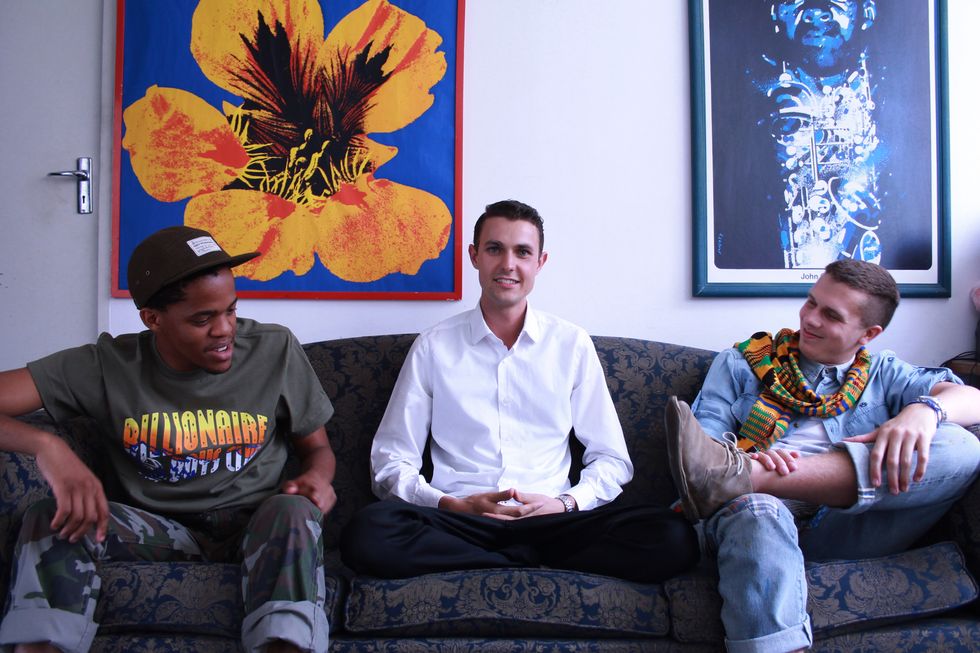 *All photos by Donovan Marais. Styling by Thando Bawana.

Mohato Lekena, Ross Dorkin & Robin Brink are three young men full of bright ideas, coming together under the moniker aptly named GlowLDB; a creative house of multi-disciplinary proportions, including web and graphic design, beat making, mixing and video, with the odd event, band practice and DJ set for good measure. With Cape Town as the backdrop for World Design Capital 2014, the city is abuzz with new ideas, projects, refreshed attitudes and creative all-arounders like these dudes - setting new trends with the spotlight placed firmly over the country and it’s burgeoning potential for greatness. We had a chat with Mohato, Ross and Robin about technology, focus, their creative environment and the future of Cape Town’s creative scene.

Shiba for OKA: Go ahead, introduce yourselves...

Mohato: Yo. I’m Mohato Lekena and I’m primarily a Computer Scientist with musical inclinations... I code musical software and use a lot of it myself. Some time soon I also wanna make art.

OKA: People say that with the World Design Capital 2014, Amsterdam Dance Event, and Bridges For Music bringing global attention to Cape Town, our city is about to hit a creative renaissance of sorts... How do you feel about this?

Ross: I think the more happening - the better. We need all this stuff to be happening for the scene to develop and for it to maintain a healthy and active existence. I think we have to find ways of drawing attention to our local talents, in all disciplines, and at the same time make sure what we’re doing is achieving a high production standard, both technically and artistically. I think that this is the only way we’re really going to open up to the world and to a more global artistic exchange. Of course this is happening increasingly these days, but there’s still a lot to do. I'm feeling positive.

Mohato: The South African creative scene is cool. There are things we do well, and so we do them - but what this leaves, in my opinion, is a gap for people doing things differently. So in that sense, now is a good time to be in the creative scene, if you have something different to offer - either in terms of new tech or ways to reach the people that the design industry has traditionally marginalised in our country. If you look at someone like Okmalumkoolkat who is in a sense the product of 90s South African music and culture meeting today’s internet - I think you can see a way to make an impact in the scene. I don’t know. Maybe I’m just ready to have my mind blown, I wanna see installations of dinosaurs shooting laser beams in Thokoza!

OKA: Tell us a bit about the space you’re living in now in the city centre and how these surroundings have aided your creative process...

Robin: We live in what used to be an insurance broker's office. This means we've got space for our 7,000 vinyls, and a recording/production studio. Our place is full of instruments, pictures, books, plants, ceramics, my paintings, and a lot of vinyl. Mo’s got a fun comic book collection too.

Ross: Rob and I spent a while looking for a space that we could live and work in - basically somewhere to make a lot of noise. Mo happened to be looking too, and was the perfect addition, considering our shared interests and plans to work together. I sincerely feel that living in the CBD and in our area has opened my eyes to the diversity of people, places and spaces. Just observing everyone getting up everyday and working and occupying the city in such different ways is incredibly educational and ultimately very inspiring. It’s a big contrast to my ultra-suburban upbringing, and I’m very thankful for it.

Mohato: I was really roped into this space through a project with Robin which was called Lightworks. I think - aside from one event or experience - I’ve learnt a lot by not passively consuming my surroundings, rather I actually think about where I am and ask questions. I reckon this also applies to creative fields, for example: if you hear a great chorus or beat ask why it makes you feel that way. You’re likely to gain something from that mindset.

OKA: When did you first feel that you were meant for a more creative kind of life? Do you think that the popularity of certain things overshadows the creative aspect of them and therefore cheapens them?

Robin: As a kid I used to cut up spaghetti boxes to build 'rollercoaster' structures for rolling marbles. You could say I've been in the creative game for a long time.

Ross: I don’t think I’ve had much of a choice. I love learning, and growing constantly, I think that’s what being creative is: exploring and challenging yourself. It gives me energy. I used to make floral coats for my GI Joes, actually, they were paisley.

Mohato: My first answer to the question “what do you want to be when you grow up” was “an inventor” (I imagined that I could go to inventing school and probably get a BSC invention or something like that). This led me eventually to doing a degree in computer science, which is not inherently creative but I happened to attend some lectures on applying ICT to design and socio-economic development and that changed everything.

OKA: Ross, when teaching how does it feel to see your students get from making noise to making music?

Ross: Teaching can be incredibly rewarding if you’re in the right head-space, and I mean this both in term of my head-space and the student’s. When someone has the motivation to learn, and to be creative with the information that you give them, then something quite magical happens. You end up just guiding them, and I often feel I end up learning more about myself from the interaction. I am lucky that most of my students have a great attitude and are willing to learn. They don’t seem to make any noises I don’t like.

OKA: And to you, Rob. How do you keep yourself focused as an all-rounder? Surely you have to focus your creative energies carefully when you do as many things as you have been.

Robin: My feeling is this: I play drums - music - which is the application of rhythm and harmony. Music is interpreted and composed in ratios and proportions. Ratios and proportions are fundamental to design. What I'm getting at is the idea that music and design (or art) are similar - if you're receptive to this kind of thinking. I should add that you can obviously break symmetries or systems too, as in free and improvisational music. Some bloke said 'architecture is music frozen in time'. That's a fun image to bear in mind.

OKA: Mohato, how do you feel about finding that happy medium between science and creativity?

Mohato: For my masters degree I’m developing a mobile music making application (on the Nokia Lumia). It really is amazing to be able to express my creative interests through my “real life” job as a researcher, but it’s also made me realise that there needn’t be a separation. I think the idea of the “lone maverick genius” is dying and being replaced by a more agile, multi-disciplinary, collaborative idea of what a creator is. I think this is the future - and it’s also more fun.

*GlowLDB recently dropped this video from their last event and interview called Aperture, which aims to expose local artists/beatmakers.

OKA: We all have that ‘something’ that has made the biggest impact on your creative life thus far. Care to share those experiences?

Robin: My family. My dad’s a lawyer and my mom’s a social worker - they’ve instilled in me a feeling for social justice while also encouraging my creative endeavours. My younger brother is an inspiration beyond words, a complete musical and intellectual genius.

Ross: Well, yes. Once upon a time, I ended up in the ICU; my heart stopped and I was dead. That has certainly had an effect on me, as did the morphine. But it obviously makes one think of the value of life and living. It also had a few spiritual side effects, but overall I came back because I still have a lot to do here - the next dimension can wait.

For more on GlowLDB go here.