This Star Trek The Next Generation Episode is Absurdly Racist 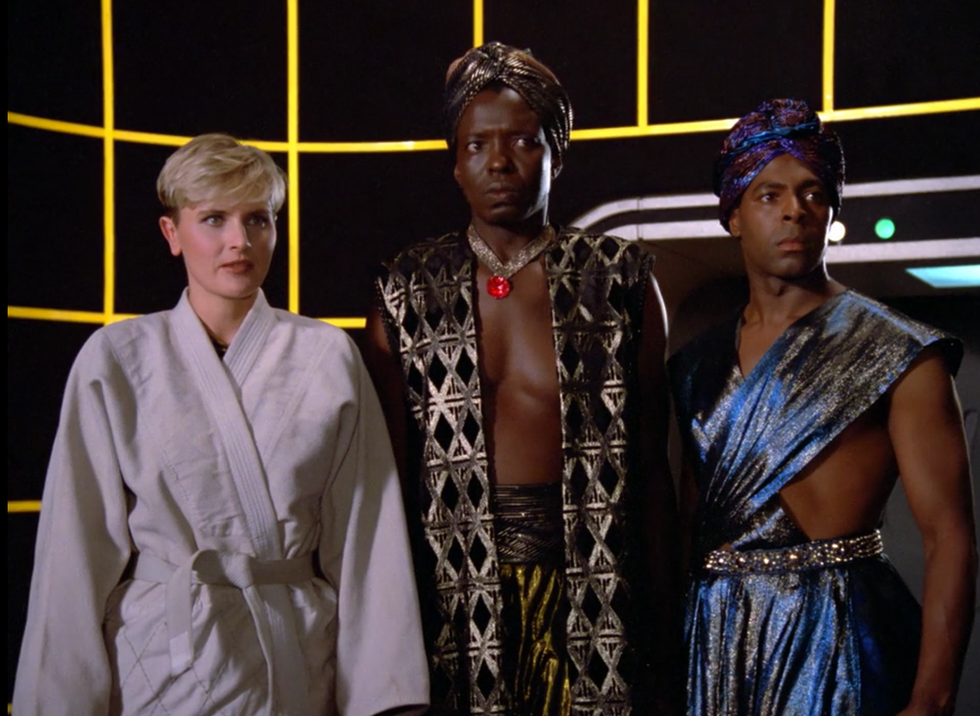 In this 1987 episode of Star Trek the Next Generation, the Enterprise crew goes to an African planet where they must defeat the natives and bring home a rare vaccine.

Maybe you're like me and occasionally allow Netflix's algorithms to take over. Last night, this laissez faire approach landed me on Star Trek, the Next Generation. While I hadn't seen it since childhood, I was pretty sure it wouldn't hold up to contemporary TV offerings.

It was so much worse.

The episode—Code of Honor, Season 1 Episode 4—begins with a disease ravaging a federation planet which can only be cured by something found on the planet Ligonia—pronounced "Lay-go-nee-a." Even before the intrepid explorers step foot on the planet they are strategizing about how best to enter into a treaty with the natives to get their hands on this valuable substance. However strange the natives' customs are, they decide they'd better go along with them because they certainly ain't paying for this stuff.

To be honest, I wasn't surprised to see an overtly colonial story line—the kind of sympathetic nonsense that runs through pop-culture today. What was surprising, however, was the arrival of the so called "closely humanoid" creatures. They're um, Africans?

The "closely humanoid" aliens of Ligonia.

Too proud to use Starfleet technology, the Ligonians beam on board using their own primitive system and appear, like an '80s orientalist fantasy, with turbans and pantaloons, carpets and shiny disco blouses.

The very first cross-cultural problem Starfleet encounters is the Ligonian fascination with a female chief of security—"With us it is the duty of women to only own the land and the duty of men to protect" a huffy Ligonian tells the crew-members.

Do they kidnap this white woman? Of course they do—setting in motion a plot involving polygamist jealousy, stick music and a female fight to the death inside an ancient jungle city. All the while the star-trekkers attempt to "respect" native tradition while simultaneously saving their woman from violent primitives.

Do the Ligonians kidnap this blonde woman? Yes they do.

According to some brief Wikipedia research, the episode's writers originally intended for the aliens to be a reptilian race with customs derived from a kind of Samurai code. Somehow that reptilian planet was developed during production into a "1940s tribal Africa" theme. Some call it the worst piece of Star Trek ever made. And I don't doubt it.

Fight to the death.

So while it comes as no surprise that an American television show of a certain era would contain racist stereotypes—embodying the cultural attitudes of the time—Star Trek is supposed to have a kind of inclusive liberal vibe. Well, as Gamergate and the alt-right has shown us, geek culture has always had a latent white supremacist streak running through it and its cultural products reflect that as well. As it turns out, letting Netflix choose what old shows to watch is like walking through a cultural minefield.