Studio Africa: Adejoke Tugbiyele On Art As A Voice For LGBT Africans 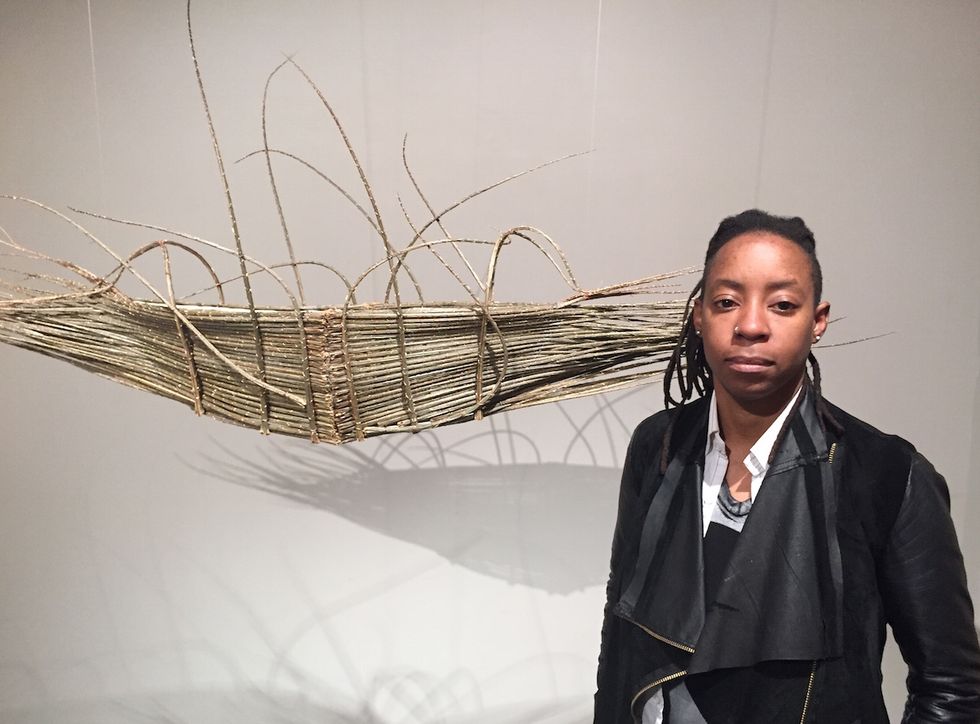 Okayafrica sits down with Nigerian-American visual artist and LGBT activist Adejoke Tugbiyele for this week's installment of Studio Africa.

“Please remember to breathe deeply within this tense political climate,” ends an email from Adejoke Tugbiyele. The Nigerian-American visual artist and activist is working tirelessly to give voice to the voiceless during these uncertain times. Not just here in America, where election season is in full swing and the threat of you know who is looming. In 2013 and 2014 the Brooklyn-born artist found herself living and creating art in Lagos, when Nigeria passed its draconian anti-gay law. The news made Tugbiyele, who is a lesbian, physically ill. That year she became the first woman of Nigerian heritage to come out publicly in the media.

Tugbiyele’s art brings to light the injustices against her fellow LGBTQ people in Africa as well as shared inner struggles. “One day I woke up and it dawned on me that simply choosing to be me WAS the protest,” she writes in an artist manifesto. “By boldly saying these words: ‘My name is Adejoke, I am black/African and I love women, could I possibly inspire a young woman out there facing her own personal demons?”

Most recently, Tugbiyele is showcasing her work at a new solo show at Skoto Gallery in Chelsea, New York City. The exhibition, Grassroots, features about 15-20 new drawings and sculptural pieces made mostly of copper wire and palm spines taken from West African brooms that she weaves together.

We caught up with Tugbiyele at the gallery for this week’s installment of Studio Africa.

Alyssa Klein for Okayafrica: Tell us about your new show at Skoto Gallery.

[The material] blends my political and spiritual ideas. Not only does it have a lot of connotations––politically, religiously in Nigeria––you can also talk about how I bound them, how I’m weaving them, how I’m bending the material, how it’s bending me in the process. There’s a lot of meditation in the work. It’s really a meditation that I do while I’m thinking about a lot of politically-charged subjects in the world right now, like anti-gay laws, LGBT rights, human rights issues, race, racism, sexism. Things I feel need to be said and need to be heard.

How do those beliefs tie into the art?

They tie into some of them more than others. Some more literally whereas other pieces are more abstract.

There’s a piece called Unholy Matrimony, which is made up a cross between a rifle and crucifix to really call attention to the marriage between violence and religion. The unhealthy marriage between it that’s caused so much loss of life, both historically and still going on today. Think about Boko Haram.

The main pieces in the show, Double Life, are speaking to duality and they’re speaking about how we’re balancing all these different forces that are affecting us as human beings. I led a double life for a while, while I was married. And that was a very painful process. It’s something we need to talk more about. Calling attention to the inner struggle that people go through when they’re trying to reconcile their sexual orientation, before even telling anyone else.

What was happening in society when you were making the work?

Always at the back of my mind are the struggles of homosexuals in Africa and here in the U.S. We’re seeing a resurgence of conservative thought and homophobia here in the U.S., especially during this tense election. I made this work during this political climate that we’re in.

It’s a scary time, because not just here in the U.S., but globally, we’re seeing a rise of extremism and conservatism all over the world. These are dark and serious times that really are calling us as people, as human beings, to look more inward, and also to look at our relationships with each other a little bit more deeply and seriously. The looking inward for me was this show. And really coming to terms with how I can remain centered within myself despite all these external forces going on.

Do you see any parallels between the struggle for LGBT rights in Nigeria and in the U.S.?

I do. Especially within the black community, there’s just a lot that we’re still coming to terms with. Especially as it relates to religion—Christianity—and just how we’re balancing our spirituality with sexuality. We really need to look more at how religion is doing more hurt than good when it comes to the struggle for freedom and same sex love.

Could you tell us more about your own background?

I was born here in Brooklyn. My parents are Nigerian immigrants who came here. Ethnically we are Yoruba. The Yoruba way of thought has influenced my work. It’s channeled through language. There’s something in the words and in the tonality that’s expressed in ways that are different than we can in English. Simultaneously, I always had to balance that with being an American. As a kid I did a lot of code-switching back and forth between a sense of individualism that’s so highly valued here and a sense of tradition and community that’s placed higher over the individual within traditional Nigerian thought.

As an artist I feel I am continuing in a tradition of making work as a Yoruba artist, as a Nigerian, as an American, that speaks to me personally, that speaks to my heritage, but also anyone in the world can connect to. It’s important to me to find language that is more unifying than divisive in my work.

I read that you were the first woman to come out publicly in Nigeria. Could you tell us about that experience?

Well I was asked. I wasn’t running around making noise. I was working semi underground with my art. But word kind of got around that that’s what I was doing during my stay in Lagos. I was approached by CNN, “Do you want to have an interview and talk about this?” And I gave it a lot of thought and slept on it, and decided to do it, because I felt that if I didn’t, I would be doing a disservice to the community. And I also felt that it was part of my responsibility to speak. I would have regretted not doing it.

What was the feedback?

The immediate feedback was rough. I got some death threats. That’s caused a bit of PTSD moments that, if you ask any gay activist, they can tell you it’s very very common in the queer community. And also while healing, I started getting sick, and I was advised to leave the country and come back to the U.S. because I had made such a big announcement at such a charged time. I think it was just a week or two after the bill was signed, so it was all over the media and all over the papers. I was advised to leave, so I did. And the process of leaving was somewhat traumatic too. I was picked up in a bulletproof car and whisked to the airport. All within a few days.

Has anyone come to you and said, “This has inspired me to do this”?

Absolutely. I get messages all the time. And that’s one of the biggest reasons why I know that my voice is needed. I’m hearing from people constantly, “You’re so inspiring. Keep going.” People have started sending me their artwork. “Can you comment on my art? Can you give me feedback?” And the community in Nigeria has also been so supportive of me, and told me to keep going. And so I’m listening to them.

Are you connected with any LGBT artists in Lagos?

I am. They’re not all out, but they’re doing their work the best they can. I’m also connected to organizations and activists that are very outspoken. I try to do my best to promote what the The Initiative For Equal Rights is doing. There’s organizations like the Solidarity Alliance For Human Rights. There’s WHER (Women's Health and Equal Rights Initiative).

Can you tell us more about the LGBT art scene in Lagos?

It’s not a very ‘out’ community. If they were more out, you probably would have heard of them already. But that doesn’t mean people aren’t doing their work. People are working extremely hard to bring those voices to the surface. Regardless of how they choose to live their lives and protect themselves under the circumstances of being in a homophobic country.

Do you have a message for queer-identifying artists in Nigeria?

That they should just keep working. It’s all about the work. It’s a labor of love and it’s a struggle. There are examples here in America and other parts of the world that they can look to, to try to avoid repeating some mistakes that have been made in LGBT movements here [in the U.S.] and Europe. And to really learn, as much as possible, because Nigeria’s very anti-gay now, but it won’t stay that way. It can’t stay that way. There was a time where the countries in Europe and here in the U.S. were very very anti-gay. It’s a process. It’s a slow process. But we’ll get there. And it’s just about keep doing the work.

Where can we see your art next?

I’m looking forward to Disguise: Masks & Global African Art (opening April 29th) at the Brooklyn Museum, curated by Kevin Dumouchelle. I’m blessed and honored to really be in a fantastic array of artists and work, many of whom I’ve admired for a long time. I’ve been invited to do some workshops at the University of Texas, Austin. That will be a nice talk on the body and sexuality, religion, spirituality. In June, I’ve been invited by Wangechi Mutu to submit a work for Africa’s Out! I’m making a new piece for that.

**This conversation has been edited for length and clarity.