Diaspora Mugabe Supporters and the Limits of a Neocolonial Pan-Africanism 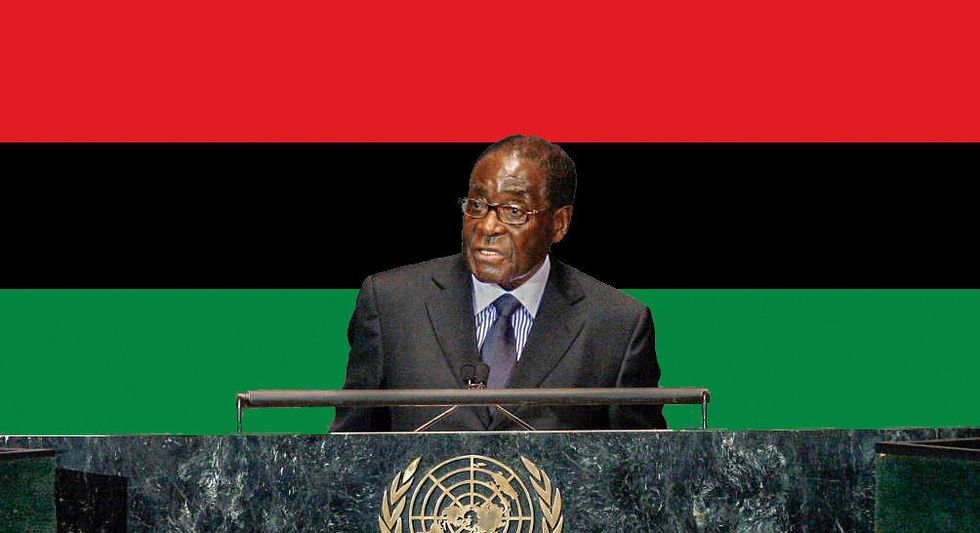 Yes, imperialists want to replace Mugabe. But it is deeply condescending to suggest that Zimbabweans don't understand their own politics.

Last month, there was a rally at the United Nations responding to the call for “Africa’s sons and daughters” to support President Robert Mugabe. This comes at a time when Zimbabweans both within the country and throughout the diaspora are calling on the President to resign.

A poster for the event calls for “Pan-African patriots” to march for “Our Land! Our Flag! Our Fight!” (emphases my own) and for Pan-Africanists, black nationalists, and the African Liberation Movement to affirm, “in the spirit of Marcus Garvey, Malcolm X, and Kwame Nkrumah” that “Mugabe is right!”

At the same time as they appealed to the heroes of African liberation, the protests and resistances of Zimbabwean citizens were framed as an “attack from the West and its mercenary mouth-pieces—#thisflag campaigner Pastor Evan Mawarire was anointed “the newest pawn in the relentless battle of the West to turn back the African revolution."

While there is both validity and historical precedent to the idea that western states have held or presently hold a real interest in destabilizing Zimbabwe and replacing political leadership, it is deeply condescending for non-Zimbabwean Afro-diasporans to perpetuate the idea that Zimbabwean people could not possibly have a true understanding of their political desires if they at all align with western ones—as though differing motivations are suddenly irrelevant.

Pan-Africanism can be generally defined as the principle of political union of all inhabitants of the continent as well as Africans in the diaspora and individuals of African descent. It encompasses a need for a collective continental and diasporic self-reliance in order to fulfill the objectives of a decolonization wherein a reliance upon Western states — understood as both historic and present exploiter-colonizers — is no longer necessary. Many Pan-Africanists, including the iconic Kwame Nkrumah who founded the Organization of African Unity, self-identify as somewhere under the Marxist umbrella or as socialists because anti-colonial struggles must necessarily be linked to an anti-capitalist struggles because of the ways Blackness is subjugated by capitalism.

Pan-Africanism is a politic born out of resistance to the violence of whiteness: one that recognizes that intra-racial unity and solidarity are central to collective Black liberation. But too often, this idea of “solidarity” gets weaponized and the classed politics of Pan-Africanism are reduced to ideologically pure political binaries devoid of any material analyses.

There is an idea that the entirety of one’s politics are wholly necessarily good if they oppose diplomatic and economic and other relations with Western states: that anti-imperialism (as anti-Westernness) is a standalone politic on its own. President Mugabe is quite vehemently anti-West in his political articulations, as is made evident by his annual United Nations General Assembly addresses. A fair part of the ZANU-PF party identity lies in the idea of revolutionary continuity: that the party led them to freedom from Rhodesia would lead them into an era of economic flourishment and self-sustainability. The party's constitution states that it endeavors to "establish and sustain a socialist society firmly based on our historical, cultural and social experience and to create conditions for economic independence, prosperity, and equitable distribution of the wealth” and that it “support[s] and promote[s] all efforts for the attainment of the Pan-African goal for the complete independence and unity of African states."

Despite this aforementioned wariness of Western intervention and destabilization, it is critical that this warranted skepticism does not absolve African leaders of their responsibility to serve the citizens that elected them. Anti-Western pronouncements are not sufficient replacement for democratic and equitable governance, regardless of purported support for and enactment of revolutionary politics.

Another unfortunate part of articulations of Pan-Africanism in the United States is a relegation of Africa to a historical point in time. In a recent Afropunk piece, the author queried: “Why haven’t countries in the African Union offered citizenship to displaced Africans as an act of solidarity?” A Pan-African model of repatriation à la Marcus Garvey fails to interrogate state infrastructure (could countries sustain such influxes in population?) and access to land (what does land tenure and access look like within a given country?) and instead favors abstract ideas about indigeneity and the African continent and a seamless return home.

The Back-to-Africa movement was called “Black Zionism” for a reason: because the call is not dissimilar to the concept of Aliyah, the call for Jewish people in the diaspora to return to Israel. Pan-Africanism cannot simultaneously reject colonialism while also modeling a mode of Afro-diasporic liberation around the fundamentally colonial ideology and state politic that is the practice of Zionism.

This refusal-failure to engage in a range of contemporary (rather than solely historical) continental issues brings us to this march. Rather than holding the nuance to recognize that western sanctions merely compounded already existing problematic domestic economic and social policy, these Pan-African politics revolve around reductive dichotomies of a monolithic and largely symbolic Africa and the exploitative neocolonial West. There is little consideration given to the idea that once revolutionary leadership may devolve into power-hungry, self-serving, and often nepotistic capitalist leadership. Africa often fails to exist as a dynamic and widely varied collection of peoples, parties, interests, and material realities: it is rather a political and historical terra nullis upon which yearnings and desires of diasporans can simply be projected.

Any globalized Afro-diasporic or Pan-African politic must necessarily be dialogical: we in the diaspora must speak, but also listen to and engage the different and sometimes contradictory things that continental Africans are saying. Rather than actually functioning as a part of the Nkrumahist tradition it invokes, the march reflects a brand of ideologue-centric politics that patronizes opposition to the ideological purity that so many Pan-Africanists cling to for dear life. How can we pretend this politic without nuance is truly a Pan-Africanism that calls for justice and liberation?

Zoe Samudzi is a Zimbabwean-American writer and sociologist based in Oakland. She tweets at@ztsamudzi, and you can visit her website at zoesamudzi.com.