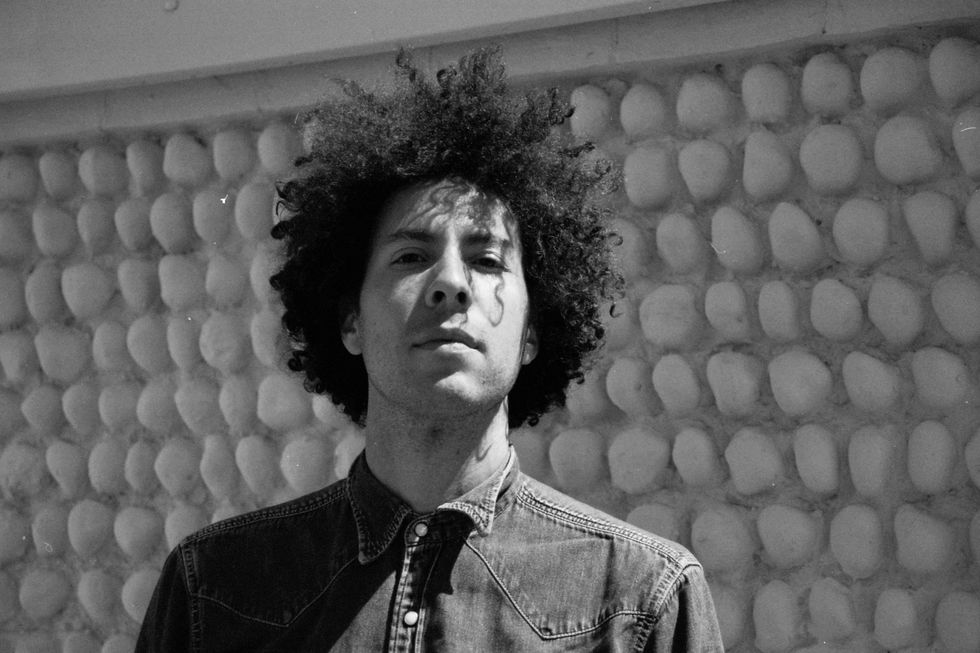 Following the release of his debut album last month, Congolese-Belgian musician Témé Tan talks inspiration and how his multi-cultural upbringing shows up in his music

Témé Tan's was born in the Democratic Republic of Congo, but his family was constantly back and forth between Belgium and Kinshasa. All that movement is still found in his music.

We spoke with Témé Tan about how his music draws on his cultural roots and his travels.

OkayAfrica: Even though you are from Congo and Belgium, your music incorporates influences from other places, too. So why have you been uncomfortable with your music being identified as "world music"?

Témé Tan: In my opinion, the term has been used to describe music that was not western. I find it rude to englobe so many different types of music, cultures under such a narrow label. We live in a time where modern western music borrows a lot from musical styles that are considered "world music." It is thus strange some should be named that way and others not. I feel more comfortable with "geographical pop."

A lot of your music has playful, whimsical lyrics. I think there's a line in "Améthys" about elephants swinging from trees. Is it important for you to keep your music silly/fun? Why?

Not at all. I use simple words and striking images in order to stimulate the listener's imagination; just like haikus. The song you are referring to is based on anecdotes I used to share with my Mom as a child. The "I am a baby elephant" part refers to a play at school where I was dressed up as one. My Mother later showed me pictures of this and I could not understand how she had recognized me. In my mind, I really was a baby elephant at that time. The second part about "swinging in trees and taking bites out of angels" refers to her strong belief in the forces of nature and archangels. "Gronder les ondes" was her way of saying how your intention behind words are important. The energy, the frequency you put out there will eventually return to you.

Migration and travel seem to be a big inspiration for you. Does the album make any political statement about immigration?

Growing up in a double culture and bilingual environment shaped my desire to learn about others. This record is my way to tell my story from my departure of Congo through all those different countries I had the privilege to visit.

"Ça va pas la tête?" was a shot at western media, whom I felt took advantage of the Ebola crisis in Guinea to make it impossible for them to migrate towards Europe and the US.

"Ouvrir la Cage" is a medley of strong rather somber images referring to what I witness when I read the newspaper or watch the news, and what I really see when I just take a look around me.

"Tatou Kité" tells the story of my elder brother who one day decided to leave his home and possessions to walk to the south and reach Congo by feet. I have a strong desire to see the world and it's hard to see how the walls we are building are getting thicker and thicker.

How are you using film and visual elements to promote this album?

The material I use is rather lo-if. Footage I gathered here and there. I like to direct videos myself. Most of the time when I produce my tracks, I already have a fair idea of what the film will look like. That is why I'm making and editing the videos for most of the record.

Who were your biggest musical influences for the album?

Mc Solaar's first albums with Jimmy Jay as a producer. Artists from the Brazilian Tropicalismo like Gilberto Gil and Jorge Ben. The Missa Luba record. To be honest I don't even know where to start… but I try to just make the music that I want to hear without referring to anyone else.

How have different perceptions of your identity (being considered white in the Congo and black/African in France) affected how you see the world and how you create music?

Well, while in Congo, I never asked myself which color I was. You can find almost every possible skin color among my family. To make it simple: my grand-mother is black, my mother is métis and my dad is white. When I arrived in Belgium, my mother was now seen as black and my brothers and I were aliens. We frankly never considered ourselves to be Belgians. We were Zaïrois, as simple as that.

As years went by, I became the French speaking guy in the Flemish community. Then when I started making music, people were labelling my music as "African" and I did not know why. At that time, I was rather listening to Japanese electronic pop or hip hop so this was surprising to me. When I went back to Kinshasa for the first time since childhood, it struck me how I now was labelled as white. It's only when people interact with me that they understand that I am actually from the continent. In conclusion, I would say that I never entirely feel home anywhere and that I can adapt myself to many places and environments. Brazil is actually the only place where nobody asks me where I am originally from.

Who are your influences on the continent, particularly where you're from, in Congo?

I love the work of Cheri Samba. His skills as a painter, of course, but also how he turned his political message into surreal images. The story of Ata Kak from Ghana is just as amazing as the record. I had the chance to play at festival where he was the headliner and he still has an amazing energy after all those years. Papa Wemba is my oldest reference as a singer. I discovered him in the movie "La Vie est Belle" in which he played the leading role. I knew all the songs by heart. His voice has probably influenced my taste for high notes when I sing. Ali Farka Touré's records showed me how simple guitar riffs could be so powerful. I learned how to only keep the essential and to be efficient with my instrument.

You've said before that you were "overwhelmed by the Congotronic sound" when you were growing up? How has that sound influenced this album?

I was already in my 20's. My reminiscences of Congolese music were Franco or Tabu Ley Rochereau. During the reign of Mobutu, musicians playing on the television had nice, new instruments offered by the maréchal. The music sounded sweet to to the ear. With Congotronics I discovered a new rough sound created by electrified traditional instruments plugged into cracked up speakers. Artists creating their tools by digging in waste. Not only did it open my ear to a new sound, it also made me realise how I did not need much to produce a record by myself.

Are there any zouk influences on the album?

Not really. I have many cousins in my Congolese side of the family. They treated me as their little brother and I would follow them to the dance floor. It is true that we danced to zouk records a lot.

What's one track you're really excited for people to hear? Is there anything really surprising to look out for?

Probably "Matiti" as it is so personal. I am very proud of the way I produced it. It brings me back to some magical moments in Congo and I hope it will touch you somehow. "Olivia" is quite surprising in my opinion as I made a kind of sound collage that surprisingly stands on its own.