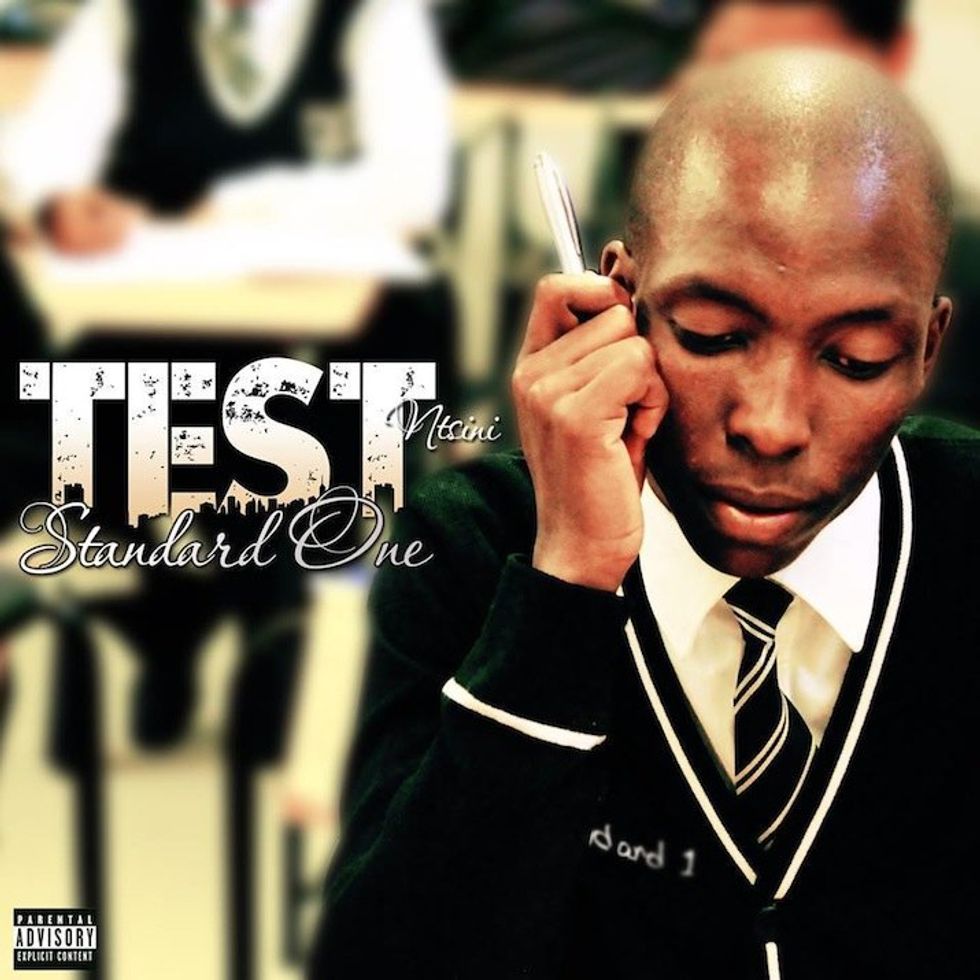 Test Ntsini is a promising Khayelitsha-based emcee rapping in spaza, a Cape Town hip hop sub-genre done mostly in the Xhosa language. Back in August (Women's Day to be exact), Test released the visuals to his new song, "Women," a thoughtful track featuring SATMA (South African Traditional Music Awards) nominee Jah Kongo. Looking at the tracklist of his debut album, Standard One, with entries like “Entertainer's Duty," “Self Hate," “Ihlwili" [blood clot], and “Ndiyoyika" [I'm scared], one might expect to hear an ordinary guy from the hood baring his soul on wax. And spitting textbook Xhosa over mostly boom bap-induced production, Test does exactly that. I recently caught up with the brother who spoke about his debut effort, spaza rap, Cape Town hip hop and more...

Sabelo for Okayafrica: Who is Test?

OKA: Where are you from?

Test: I'm from a village known as Bilatye in the Eastern Cape. Lady Frere is my home town. But I stay in Khayelitsha, Cape Town.

OKA: When did you start rapping?

Test: Back in 2006. I was doing kwaito music before then, since 2004 inspired by Zola. I switched to rap music after I got to hear Driemanskap. I was 15 years old at that time. Mentored by great spaza rap artists; Zanzolo, Street Life, MaXhoseni, Nkululeko Hleza, Mashonisa and Phoenix [of Backyard Crew] and the late Abongile Kroza. Since then, I never look back, and that helped my rapping skills to grow and attracted many people to follow and support my music. In the middle of the year 2006, me and my friends formed a crew known as Un-decided Crew.

OKA: Tell us about Undecided Crew.

Test: Un-decided Crew is a Khayelitsha, Site B rap music crew that consist of Malwande "Yai" Batembu, Aphiwe "Qhama" Menziwa, Bulelani "Styles" Bambiso, Silulami "Ingcuka" Mpateni as well as myself. We are all brothers who were given birth by our loving single mother – Music. In 2010, we released our album Is'celo [a request] independently. It received nothing but love from the underground rap scene in SA. Along the way while pushing our album, we couldn't maintain our vision constantly. And that led us to go our separate ways. We now hardly work as a crew but we do collaborate on our solo projects.

OKA: How would you describe your music?

Test: I do rap music. Mostly in my mother tongue [Xhosa], mixed with ghetto languages. My music is calm, ear-friendly, inspiring and spirit-uplifting according to the feedback from my supporters.

OKA: Take us through Standard One.

Test:Standard One is my first CD as a solo artist. I compiled 15 of my songs to introduce myself as a solo artist as many people knew me from my crew. On this project, the mission was to build a foundation for my career. I worked with with vocalists Nos'celo, Muziek Sensation and Embo; emcees Manqoba, iMpendulo, Qhama, and Lyf Sentence; and beatmakers Qhawe, Matic, Soul, Daisy, and Pzho. It was recorded at SM Records and mixed and mastered by Daisy.

OKA: And why that name for the project?

Test: It's the beginning. We're continuing with the journey.

OKA: How has the response been?

Test: It's humbling kakhulu (a lot). There's no better feeling for an artist than the feeling we get when hearing that people enjoy the music you make, relate to it, don't regret buying the CD, and can't wait for the next project. It's quite humbling. Marketing side, the process is a bit slow but we getting somewhere closer to where I want it to be. All in all, even though the marketing pace is lacking a little, there's great hope that soon the situation will change for the better. I'm learning, I'm growing, and enjoying it.

OKA: How important is it to you that your lyrics encompass struggles faced by the average black person in the hood?

Test: First of all, my lyrics are driven by a specific theme that got my attention at a specific time in my heart. The concepts are always different. I always like to do something different 'cause I like growth and I believe I will never find growth in my comfort zone. So I like to stretch my creativity. To answer your question, it's very important because you'll find it inspiring and giving hope to someone who's experiencing the same struggle.

OKA: Who would you say is your target market?

Test: I do music for all people but specifically the youth. Through my music, I'm shaping the leaders of tomorrow.

OKA: What are your thoughts on the Cape Town hip hop scene?

Test: The growth is motivating a lot. It gives hope. Even though the oneness amongst artists is not as tight as it was before, it's inspiring to see how artists take their craft seriously these days. You can tell professionalism is what we're closely heading to. And I personally believe that's the only way for the people to take us seriously because if you don't take yourself seriously, how do you expect others to do so? I'm in a process of teaching myself gratitude, so I won't dwell on the negative.

OKA: What are the biggest challenges you face as an independent artist from the hood?

Test: Getting booked for performances and getting told it's only for exposure. Also, radio DJs and music compilers only give attention to your work when you bribe them.

OKA: How did your collaboration with Jah Kongo come about?

Test: I was invited to perform at the Amazing Women event that was organised by Theatre4Change for the 2014 National Women's Day. I wanted to be relevant to the theme so I decided to write a piece especially for that event. I'm a rapper, but I like other kinds of music a lot, I wanted the chorus to be vocal a little so I approached The African Warrior: Jah Kongo. I've always known him since I started doing music. He's one of the artists I've been looking up to. He respects my music and I respect his. We've been both wanting to do a song together, so I approached the elder and we took the idea into action along with the legendary boxing star known as Mzonke Fana “The Rose of Khayelitsha." Now the idea was not to just do a song, but to pass an encouraging, empowering and acknowledging message to all the women in the world. The humble Mzonke saw the bigger picture and he also joined us to send a message to the female human.