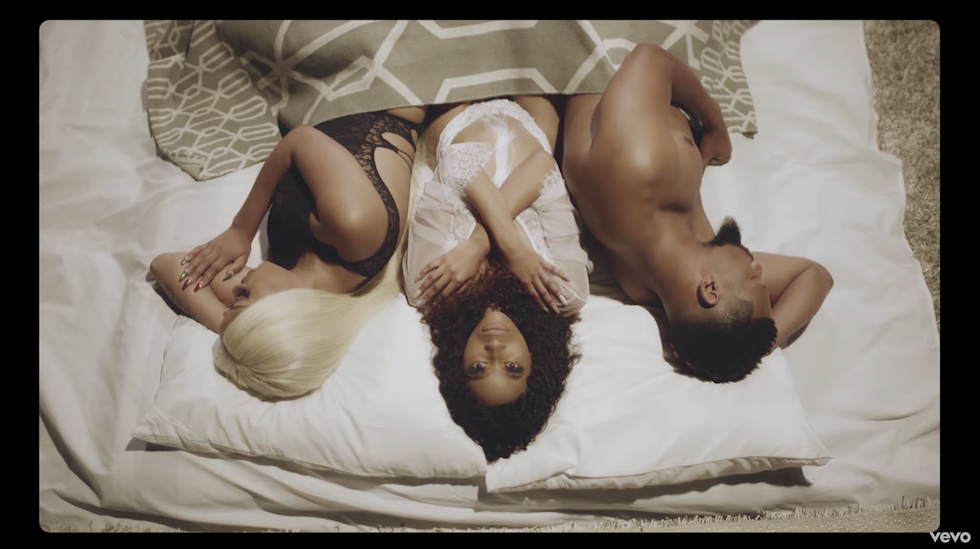 Thabsie's latest single "iLula" explores unfaithfulness in relationships. The South African singer tells the story of being cheated on—the lies, the broken promises and the emptiness it makes her feel.

In the hook, in which she interpolates Brenda Fassie's classic song "Istraight Lendaba," Thabsie declares that it's a no-brainer to walk away from the situation.

The visuals for the single are simply stunning—from the production design to the outfits and makeup. Directed by Callback Dreams' Makere Thekiso, the visual is metaphorical in its depiction of love triangles—for instance, when Thabsie's partner (played by actor Kay Sibiya) lies to her about his mistress, the latter is sitting right there next to them, obviously shocked by the lies. You can see the three in bed together, with him paying attention to one of them at a time.

"There's something about infidelity that leaves a woman feeling vulnerable, bare and exposed. I know this may sound controversial but this applies to both women in the scenario, the "main" and the "side". I say this because one thing life has taught me is that love sees no wrong and love sometimes sees no right, it doesn't give you the choice to decide who you fall in love with. The heart wants what it wants. It wants what it shouldn't and doesn't want what it should and in all of this people, often the women, get hurt. This is not a justification, it's just my view, my revelation, the view I tried to depict in the 'iLula' music video."

Watch the music video for "iLula" below and stream the song underneath.