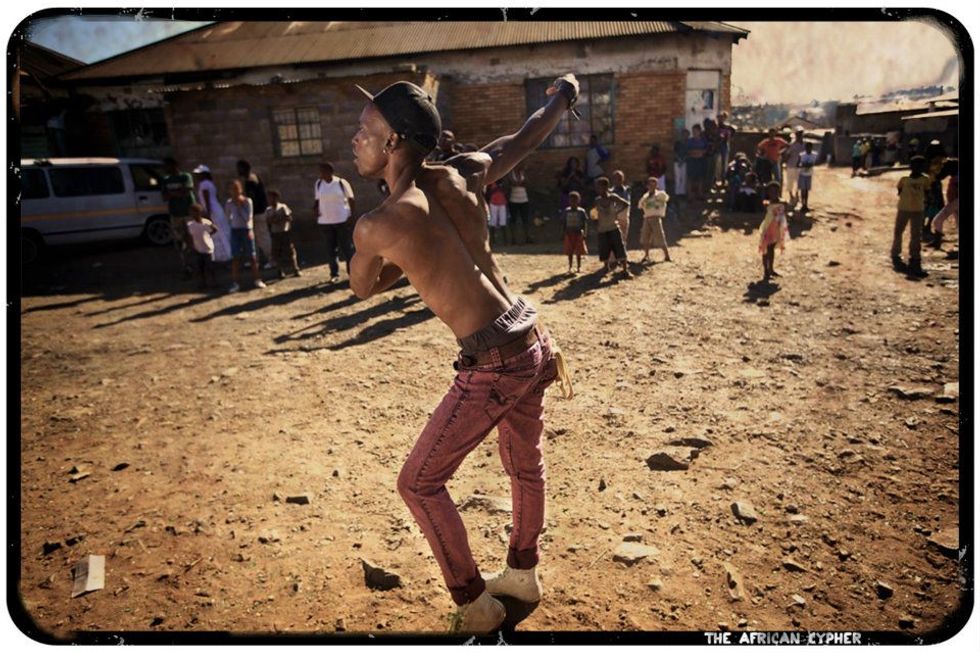 In her keynote address at the Goethe-Institut’s Über (W) unden Art in Troubled Times conference, ‘On the Pain of Death’, South African writer-poet Antjie Krog offered the following insight: that perhaps the only thing that art can do is “to try to transform pain into a kind of beauty so that one, at times, can live with loss”. It’s an apt observation and perhaps one that applies somewhat to Bryan Little’s moving feature-length documentary, The African Cypher.

Part ethnographic, the film charts the journeys of several street-dance-crews in the townships of South Africa as they prepare for the Red Bull Beat Battle. What emerges from the different narrative strands is a complex and redemptive story of how urban youth locked up in the country’s ghettos are able to transcend the harshness of their circumstances through dance. We caught up with director Bryan Little to chat about the making of the film.

Tell us about the process of making the film, it must have been quite an experience; how long did it take?

The film took us a year to complete. It was an incredible process and one that enriched me a great deal, both personally and as a filmmaker. Our initial objective was to make short films introducing the different styles of dance for Red Bull SA as they were creating a dance event to be held annually. Very soon into the process we realized that there was a much bigger story to be told and so we started shooting with a feature documentary in mind. We shot all over the country, spending months in Soweto, Orange Farm, Mohlakeng and the Cape Flats. We really tried to integrate ourselves into the lives of the dancers and the communities from a place of respect.

We were very careful about how we approached the situation - as filmmakers we have the power of the camera and that is easily abused. People want to be on TV, want to be famous and it is easy to go in and exploit a culture with your camera and pull away with superficial footage. We wanted something deeper, we wanted to find out what fuels their passion and their fear, so we spent a lot of time at first just meeting people and hanging out in the communities, drinking with people, meeting their friends, their mom's and elders and family. I only wanted our camera to go in when it could be followed by our hearts. It sounds cheesy but I believe that you have to care about the people you are filming or nothing special will come of it no matter how beautiful the shots.

There’s a stigma almost, you could say, attached to urban youth that grow up in under-resourced areas. In the stories that are told there are the usual clichés of drugs and gangs and so forth but The African Cypher is more empathetic in its outlook. On the whole the film is very positive, was that your intention from the start?

My intention from the very beginning was to try and be true to the people in the film. The reason I felt there was a bigger story was because the people I was meeting where bigger than the dance-form they performed. The people I met often did have horrific and frightening ‘back-stories’ but these same people didn’t live that story, they lived with passion and courage through their art form. In the film I make a statement that; “The stories we want to hear as a western audience do exist here - The hopelessness, drugs, violence, poverty and broken homes; but to dwell on it would be a disservice to every aching muscle and screaming heart that dances.”

An hour ago I watched a talk, incidentally, on Okayafrica that spoke so strongly to these fledging and intuitive notions that have formed in me as a filmmaker through the process of living in Africa and making this film. In the talk Chimanda Ngozi Adichie, a Nigerian author speaks of the the dangers of a single story. “The single story” she says, “creates stereotypes, and the problem with stereotypes is not that they are untrue, but that they are incomplete. They make one story become the only story.”

I once wrote on our studio wall – ‘People become our perceptions of them.’ I guess in a sense this is what I was intuitively and consciously avoiding in the film, I wanted people to see the people not the situation. To see the courage, passion and perseverance of talented individuals rather than the abject ‘single story’ that can so often form when making a film of this nature. When I met the heroes of this film they inspired and uplifted me regardless of their situation and I wanted that to be the experience the audience walk away with.

Obviously people will still make the connections that have become stereotypes or clichés as you say, as many stereotypes are founded in generalities of truth and these issues DO exist and permeate the films subtext but the most important thing is to try and separate the individual character from that preconceived truth and allow them to express their own.

On so many levels, South Africa is still a fractured country, what did you come away with during the making of the documentary? And related to that, what would you expect audiences to walk away with after watching the film?

What you say is true, in many ways we are sadly and rightly still a fractured country, people might shy away from admitting this as we have made huge leaps forward and it feels almost unpatriotic now to question, but I don’t believe that intentions in general are bad. Racism is a very complex biological and sociological phenomena and one that will not be solved overnight, if at all, but I believe that curiosity can only be a great starting point for any real growth.

I think that films like this and even on a personal level the friendships I have formed in the process of making it are the slow and true markers of change. I remember first telling my family that I would be working in Soweto for a few months and the reaction was in varying degrees shock and curiosity. Which is an interesting reaction, we as South Africans are frightened of each other, but we also very curious about each other. I am not saying this is true for all South Africans. As some, from either side, have fundamental convictions and aren’t really curious about anything and others are so ‘liberal’ that they have almost atrophied the ability to really engage honestly with their feelings. The real ‘integration’ happens on the periphery of any group, the curious fibers and fingers of relationships formed across cultural divides.

I hope that as an audience member if only for a moment you feel a real connection with one of the people in the film, then I will feel that the film has succeeded. Whether you are white and he/she is black, you are Zulu and he is Sotho, you are a Pantsula and he is a B-Boy - we all have one universal and inherent commonality and that is the turmoil and joy of being human.

Lastly, what are your hopes for the film? Where will it show after the Encounters Film Festival?

The reaction from the Encounters audience has been really overwhelming with sold out shows and this has really given us faith in the film and has been a wonderful experience. The film has also been selected for the Durban International Film Festival in July which is an amazing opportunity and we are also entering it into major international festivals. From there once its natural festival life has run we will be looking to get it to various broadcasters both locally and internationally. We are also passionate about and committed to having local screenings in the communities that helped make the film possible.

Watch The African Cypher trailer above and a few of Bryan LIttle's 2-minute films for the Red Bull Beat Battle below. Feature photo credit © Suicide Monkey.