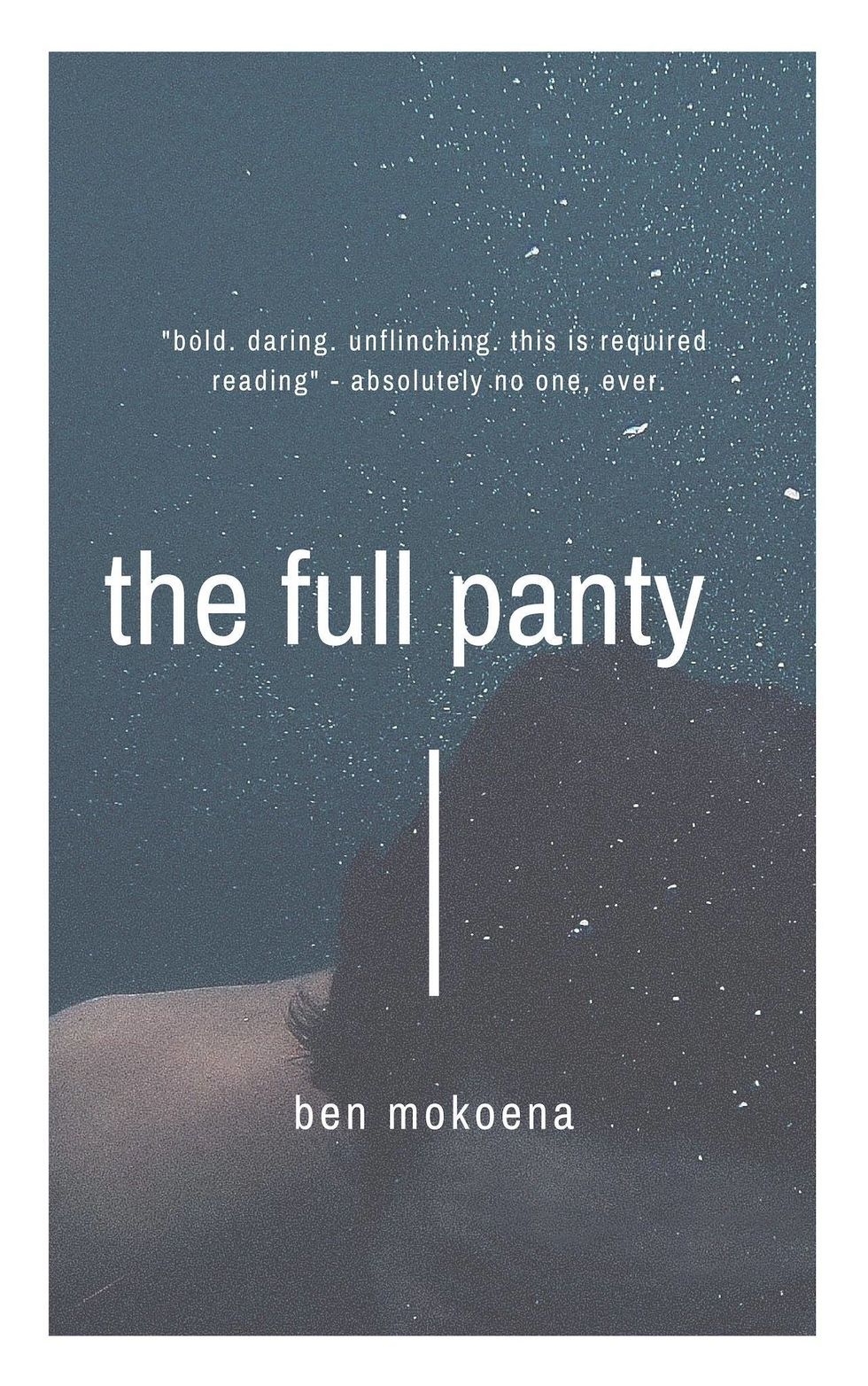 "The Full Panty" is a digital collection of short stories by Ben Mokoena.

A white man winning a feminist award, the oppression Olympics actually taking place (in Greece), a man whose day gets fucked up when his Instagram post fails to rake in engagement, a heated Twitter debate about a couple's picnic… and a few more stories in Ben Mokoena's book The Full Panty, all hold the mirror to modern society, and the reflection is nothing short of humorous.

Our hypocrisy, sense of self importance, inconsistent politics, feistiness, love for spice, and many more of our collective traits are exhibited in relatable anecdotes.

The Full Panty, which consists of 10 bite-size chapters, dramatizes modern day scenarios, most of which unfold on the Internet or are rooted in discussions that have taken place online in the recent past. A majority of the stories touch on gender, especially the insufferable sexism from men.

The chapter "Man Fights For Right To Beat The Shit Out Of His Kids," makes fun of the debate around corporal punishment in South Africa and the world at large. A huge number of millennials believes that "spare the rod, spoil the child," is a thing of the past, and must stop (in 2017, it was made illegal in South Africa to spank a child). Conservative people, who usually use their disciplined, successful, teetotaler, non-hoe, respectful and cultured selves as examples, believe that kids must be beaten up or they won't amount to anything in life. Thirty-nine-year-old Thabang Vilakazi, who we meet in the chapter, is part of the latter group. He is quoted as saying, about his father:

"He also used to beat the shit out of us. But I honestly think I wouldn't be the person I am if it wasn't for all those times he threw me over the balcony. It made me a better person."

The Full Panty is reminiscent of satiric TV shows like South Park, Family Guy and Boondocks, among others, in that it brings humor to serious topics in a not-so-subtle tongue-in-cheek manner. A majority of the chapters indirectly point to events that have either occurred or are typical happenings in the Twitter streets.

A great example is the chapter "Man Demands To Know What Feminists Are Doing To Stop Climate Change" in which a man goes off on a tirade against feminists, sparked by a tweet by the UN on the effects of global warming. "Let's see if the feminists will discuss this," the man is quoted as tweeting. "They're hypocrites. Everyday they come here and tweet about msojoni but they don't want to discuss the issues everyone else is talking about. Bayanya."

The chapter speaks to just how defensive men can be against feminism, and to what great lengths they can go in their efforts to discount struggles they have never endured and thus will never fully understand. Mokoena lifts up the mirror to such individuals to see they ridiculousness in full.

The chapter further prods those who understand their boundaries and assume to occupy a safe partition of the personal politics spectrum.

My friend here puts words next to each other better than all of us. Here is a collection of very funny short storie… https://t.co/mWt1OZdeoH
— A Typical Zulu (@A Typical Zulu) 1551455970.0

The Internet is a great place, but it can get ridiculous. A great example of this in South African Twitter is a recent incident in which a woman posted a video clip of herself surprising her man with a picnic for their anniversary. The tweet sparked a debate that caught fire for a few days.

Mokoena exaggerates and dramatizes the scenario in one chapter. Firstly, it's the deliberately reductionist headline: "Lovers' Picnic Sets Off Nationwide Gender War." Katlego Molefi, the main character in the chapter, finds himself in a conundrum. He doesn't get how something as simple as a picnic could spark a national emergency declared by the president, and has seen him scared to leave the house for starting a national crisis.

"The nearest shop is a 15 minute walk away and I can't risk being seen in public. Everyone's blaming me for different reasons: my girlfriend says I didn't stand up for her, men think I'm a cuck and women think my silence around the whole thing is complicity," Molefi says.

The funniest part of the chapter is the responses to the tweet. "The emotional labor cartel strikes again. South African women are such cheapskates," tweeted one man. One woman tweeted: "Imagine thinking cishet man deserve anything other than food and segz? You're lucky you're being anything. Reparations, nigga. Pay them!"

The sample tweets are typical of what you see on South Africa's Twitter streets—from the tone to the jargon used.

The Full Panty keeps its audience in mind. Long form writing usually finds itself trapped under tweeps' collections of "Likes" and Facebookers' "saved" tab, hoping and longing unsuccessfully to get read in its entirety. All in vain. The Full Panty, however, is tailored for a reader with a short attention span. The book is only 23 pages long, including the pretext and dedications page (it's strangely dedicated to the rapper Nadia Nakai). Most of the chapters average only two pages. This brevity, however, doesn't come at the expense of half-told stories. The reader is not left in suspense—the writer manages to tell the story in the fewest words possible (ask any writer, that is the ultimate dream).

Ben Mokoena is the alter ego of South African writer and author Rofhiwa Maneta, who released his self-published debut book Metanoia(2017), a collection of fiction short stories that revolved around mental illness, race and the rat race. The collection was written with the same wizardry—the chapters were succinct yet longed for no further words.

As a journalist, Rofhiwa Maneta has written for publications such as Noisey, Mail & Guardian, City Press, OkayAfrica, and many others.