The Future is African: How this Web Series is Bringing the Real Africa to the World 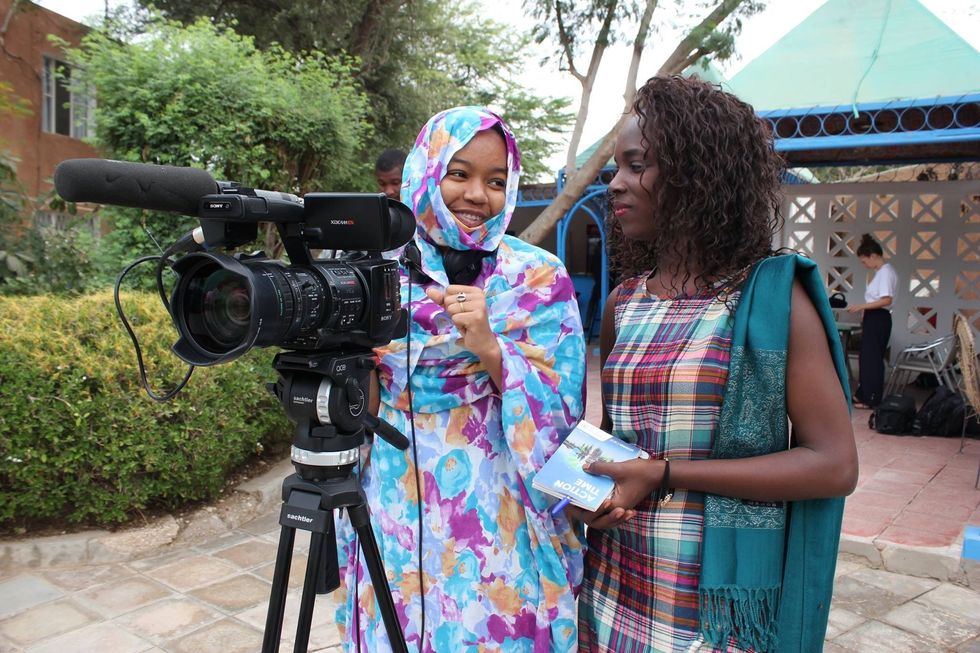 Cliches of starving children and the belief that Africans are uncivilized and war hungry, are ubiquitous in the mainstream media. Slice Up’s new web series #AfricainTheMedia aims to challenge these tropes by providing an African gaze on the continent. It looks at how we see Africa portrayed now, and how this is going to change quite rapidly. The web series features influencers from the Francophone world such as Binetou Sylla, CEO of Syllart Records, Blick Bassy and Aïssa Maïga.

“Bad news sells well. People feel better about their lives when they hear others have bigger problems than them,” says Remi Adekoya in an article titled Why Africans worry about how Africa is portrayed in Western media. Outsiders often dictate how the world views Africa while failing to hire African journalists to create content that speaks true of the reality of the continent.

In an episode of #AfricainTheMedia with Binetou Sylla, she speaks about how we are robbed of a true image of Africa. She says the image we see “has cynical undertones; it often consists of clichés about Africa’s poverty,” we don’t question the validity of these sources or their understanding of Africa. The image we see today is often taken out of context, and unashamedly ignores the facts and stories that give a fuller picture of a 1 billion person strong continent.

Images of “ Western saviors” coming to save Africa from hunger, poverty and war overshadow the truth; “we do not talk about the Africa that moves, the Africa that pops, that makes its own music, an Africa that conquers all areas of culture, fashion, music, and contemporary art, “ says Binetou Sylla.

“The way Western media portrays Mauritania is pretty much the same as other African countries : negative, negative and negative. Some of that information is true but lacks context, “ says Amadou Sy, a young Mauritanian journalist that has worked with Slice Up. “We forget that there are many young Mauritanian entrepreneurs, trying their best to get by. The civil society is growing. Not everything is so dark!”

Slice Up co-founder, Elsa Miské, is invested in making sure that this cycle ends somehow. She feels strongly connected to Africa because of her Mauritanian background and her travels to several African countries. She says, “the idea of the series #AfricaInTheMedia came up because we wanted to make it clear that there is a problem with the Western media's treatment of the African continent.”

When will we see the real Africa ?

“With a simple phone we can produce content,” states Rokhaya Diallo. “These tools are extremely developed on the African continent,” and there is still a great demand for news and stories from the continent. It’s become really easy for anyone to create and share content. “There is a huge desire for mobility and dissemination of information that allows the images to be both captured and to travel,” she says.

Access to smartphones and the internet will help us change the African narrative in Western media. Blick Bassy says, “on the Internet, it is within your reach to look, understand, see the reality.” But a large part of this means that Africans should take control. We should tell our own stories and make certain that they are told from where we are. “This will change everything because, no matter what, the storyteller will tell a better story if he/she has experienced it,” says Bassy.

“African media has been criticized for failing to market and advertise the true identity of the continent to the world,” says Ahmed Mheta in an article titled Why Western Media Focuses on Negative Coverage of Africa. This may be true, however we still have time and resources to tell our own stories and many have been doing so.

“For example, last year a group of African students launched a photo campaign titled ‘Africa is not a country’, and educated the world that Africa is a continent with 54 countries and different languages. The U.S.-based African students posted the campaign on CNN’s iReport platform and the campaign was well received globally, ” shares Ahmed Mheta.

Why don’t we have Africans telling us about the history of Europe or America? Because it doesn’t make sense, they don’t know it better than an European or American person does. So why is this not the case when Africa is represented in the media? It makes complete sense to see that it is nonsensical to have Westerners telling Africa’s story as their knowledge and experience will always be second hand. People always have something to say about Africa.

It’s very common for people to refer to Africa as one place; completely ignorant of it’s complexities; different countries, cultures and languages thus squashing it’s existence and reality into one pretty picture. Rokhaya Diallo makes the point, “there really is this feeling of the "specialist of Africa", one has the impression that the African continent is something extremely simple and that it is within everyone’s reach to talk about it ….”

Slice Up aims to train young African digital content producers. They will go back to Mauritania to work with another group of young journalist later this year and will be collaborating with OpenStreetMap (an open source mapping software) so that “journalists are able to geolocalize the content they produce.”

Amadou Sy adds that, “the world needs to know that Mauritania is an African country full of potential. There are many interesting initiatives, the country is more and more open to the world. The Internet is becoming more accessible.”

It might take some time to see the real Africa in Western media but with the internet and mobile phones within our reach, I think we are quickly going to see a rise in the dissemination and consumption of real African stories.