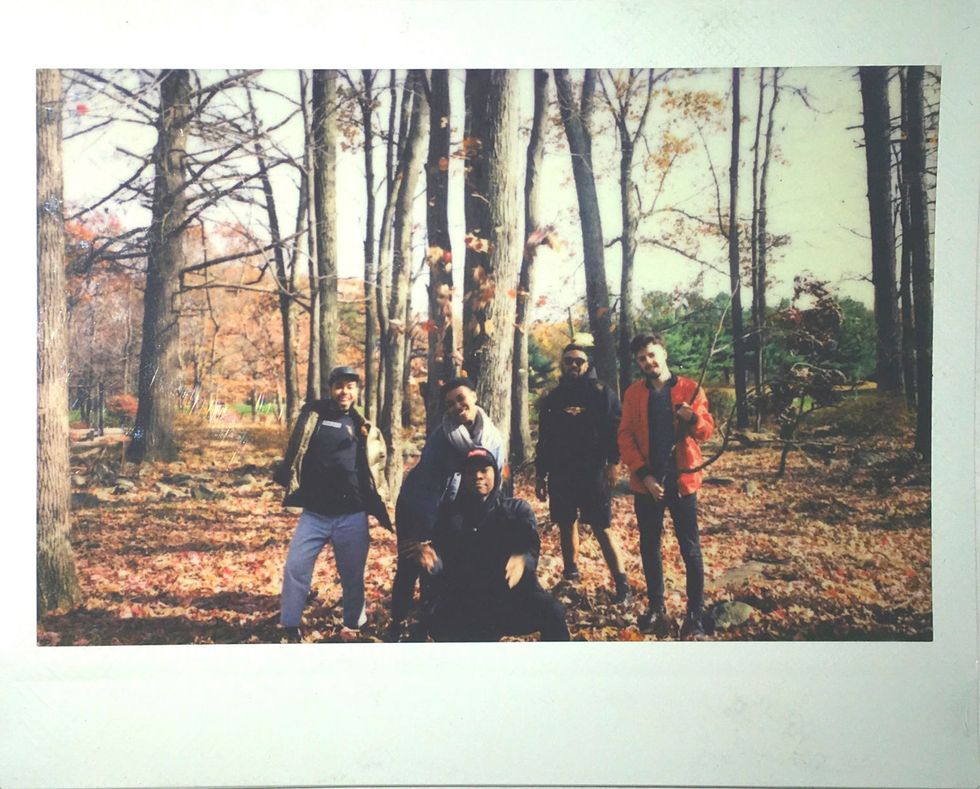 Okayafrica contributor Zandile Tisani speaks with members of NON on how their collective is an act of defiance in a status quo world.

It was only my second week in what had been an uneventful but so far positive trip to America that I found myself half asleep on a bus with 30 or so music journalists and artists headed to the Ray Ban x Boiler Room Weekender.

On the way to the weekend’s location—a place ironically named Lake Harmony—I see emblazoned along the cheekbone, on the glossy scowling face of a freight truck: Vote Trump, Make America Great Again. I’m about to learn that this isn’t so surprising for this part of the world. Still the interruption sets me off balance, the record skips and the flow is momentarily disrupted.

Later that night, ensconced within the imaginary barriers that demarcated the event as a safe space, headliner Kamasi Washington closes a phenomenal set with his track, “The Rhythm Changes.”

“Our minds, our bodies, they alter, they leave us. Somehow no matter what happens, I’m here.”

A day later, a gang of feverish cops shut down the event, but in various villas scattered across the venue attendees open their doors to friends and strangers. It’s in these small pockets that the party continues.

The NON collective organizes itself around a commitment to running “counter to current Western hyper-capitalist modes of representation and function.” Represented at The Weekender by Angel-Ho, Isis Scott, SCRAAATCH and Moro, NON emphasises the importance of the collective as part of its commitment to artists from Africa and the diaspora.

My mind is immediately piqued by the image of an entity that seeks to delineate borders between binaries, a body that defines itself with the purpose of dismantling hegemonic structures while remaining shapeless in its refusal to exclude, operating in this environment, that is obviously preoccupied with maintaining absolute order.

“NON to me represents giving a platform to black identities that aren't traditional or apologetic, whether it be political or emotional,” Detroit-based artist Isis Scott says. She became associated with NON after her Rihanna “Diamonds” edit, “Beautiful $ea,” caught the attention of NON founding member Chino Amobi, who consequently invited her to release an EP with the label.

Scott creates sound mixes by manipulating different genres of music to express an intense and concentrated commentary on her black identity. The sound is bombastic, sometimes obnoxious in a way that references her influences, which include 90s Detroit artists like Doughboyz Cashout.

“I mean I wore a big ass faux fur coat to the GHE20G0TH1K party, like that's some west side Detroit type of shit,” she says laughing.

Hailing from one of the few major cities in America with a predominantly black population, its economic decline meant that survival required rigorous hustling. Regardless, Scott remains assured: “We know how to turn nothing into something.”

Origins and space, whether it’s physical or socio-political, carry through as vital influences across NON members.

“The world has gone pretty right wing and Argentina did too,” Moro, NON collaborator, says. The shock of the outcome of election night are not new to Buenos Aires resident. “The President we didn’t expect to win in last October’s elections actually won. His way of treating independent culture as something expendable is harmful to people that are trying to make culture evolve.”

Through his sound—which fuses Caribbean, particularly Cuban, styles with those of Rio de la Plata (Argentina–Uruguay), he exercises an imaginative adaptation of a misrepresented past. Not so much an act of restoration as an act of revival.

“Being loud isn’t always the most effective way to place attention on to issues. This goes to music even.”
One of the founding members of NON, Capetonian Angel-Ho speaks passionately on alternative forms of defiance. “Collaboration, collective communication, engaging, listening to each other is collectivity as defiance.”

During my Gmail chat with Angel Ho, I cut back and forth between hysterical scenes on Instagram of demonstrators yelling “Fuck Trump” at a rally outside his infamous towers. In the context of this conversation I wonder if the terror of the increasing power of right wing and fascist ideology globally has cornered civilians into a state of such fearful hysteria that one conflates defiance with delirium. Angel Ho provides a sober response: “We cannot heal and empower as people when we already have the odds against us, this calls for new methods of mobilizing and what protest means in the years to come.”

Contributing writer for the New Yorker Hua Hsu responds to the shock of the election by taking refuge in music and the countless metaphors inherent in the form: “If the election of Donald Trump demonstrated anything, it is that we should never underestimate the unpredictable rhythms of culture, the possibility that a random utterance or an empty boast might coalesce into a movement.”

While NON remains an entity operating on the fringes of mainstream culture it isn’t absurd to see how movements like this may take real shape in the shadow cast by divisive systems.

Isis Scott too remains stoic in the face of the unknown. “I know a lot of people are scared now but I'm very optimistic. I don't think the outcome of the election represents all of America, a lot of young people don't connect with the old ways of America plus we need a new system. I don't know what it would look like but now is the time to figure it out.”

On the night the police shut down the Boiler Room event, as a panicked group of attendees is being ushered to the only exit police have allowed access, a friend quips, “I’m really glad Kamasi is not here to see this.” Despite the panic in the air I can’t help but chuckle and again I think about that song.

“Our love, our beauty, our genius, our work, our triumph, our glory, won’t worry what happened before me, I’m here.”

Zandile Tisani is a Johannesburg-based filmmaker, occasional writer and self taught cynic with a passion for running, reading and foods that are easy to consume whilst driving. She is in the process of producing a series loosely based on her life as an urban black female who is short. To keep up with Zandile, follow her on Instagram and Twitter.