The TED Talk Questionnaire: Walé Oyéjidé of Ikiré Jones Is Preparing for TED by Listening to Kendrick 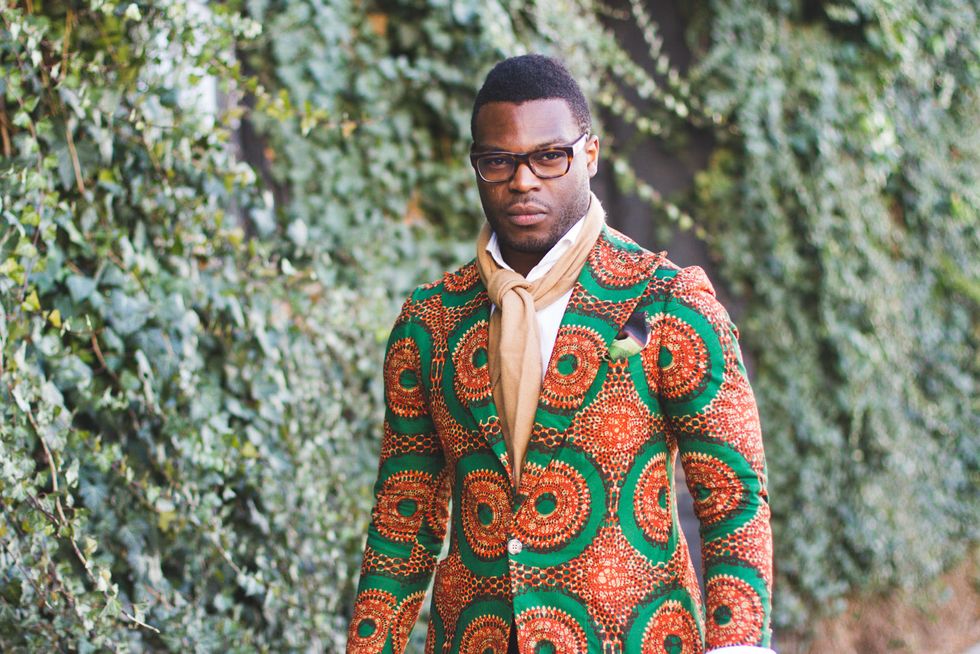 The socially conscious fashion designer takes us through the process of preparing a TED talk and tells us what he listens to to bolster his swagger.

This August, Arusha, Tanzania will be the setting of TEDGlobal 2017 Conference where 21 innovators will come to spread worthy ideas. 10 are from Africa. As part of our focus on African Futures, this month we wrote to this year’s African Fellows to ask them questions about themselves and their work. TED recently announced that applications to be a 2018 TED Fellow are now open.

Find out more information about the program and how to apply, here.

Our second interview is with OkayAfrica favorite, the fashion designer Walé Oyéjidé, the creative mind behind the menswear line Ikiré Jones and someone we've written a lot about in the past. He's told us about the inspiration behind his boundary pushing lines that fuse messages about migration with richly detailed suits and how he got his designs into the upcoming Black Panther film.

How did you first find out you were selected?

I was on vacation with my family. We were walking through a botanical maze in New Orleans when my phone buzzed and I saw the email header flash across my screen. It’s an interesting time we live in now, when an unexpected email can either ruin your day or make your year. This time, it happened to be the latter.

Was it difficult coming up with the concept for your talk/project?

No. The beauty of the TED Fellows program is that it champions brilliant people that are working on innovative ideas from a variety of disciplines. I didn’t have to dig deep to find a concept, because this is what I do every day. TED was simply gracious enough to offer the opportunity of having my work illuminated on the world stage.

At what point did you finally say: "yes—I feel good about what I am about to present?"

At this point, virtually all of us have heard, and been inspired by, a TED talk. So it’s a pretty intimidating thing to think about stepping onto that stage and deliver a performance that will be just as inspiring to someone else. That said, I took solace in the fact that I’m a unique individual with a strong point of view and perspective on the world. I think the trick is to worry less about being as good as someone else, and to concern oneself more with being the best version of you.

Any particular things you are doing by way of preparation?

I’ve been on a pretty consistent audio diet of Kendrick Lamar and Jay-Z. There’s not much else one needs to bolster his swagger before stepping on stage before a thousand strangers.

What made you passionate about your subject?

As someone of Nigerian descent that has also lived in the United States for more than half of his life, my worldview is very much shaped by the complicated histories of both nations. I continue to remain inspired by the centuries long tradition—and also the contemporary efforts—of people of color creating cultures that influence the entire globe. For me, it’s very important that we tell stories that celebrate our many contributions to society as a whole. At the moment, fashion happens to be the medium through which we express that message. But the same song can be sung in a hundred different languages. Each of us has his or her own way to push things forward.

To the next generation of intellectuals who are reading about you and inspired by you right now—what would you say?

Speak your truth in the unique way that only you can.

Personally, what does it mean to you to be selected as a TED fellow?

To be frank, it’s a huge credibility booster. There’s a Tribe Called Quest lyric that goes, “I’ll never let a statue tell me how nice I am.” The idea being that accolades should never dictate one’s sense of self-worth. It’s a totally valid way to approach life. But for the many of us who still see themselves as being a long way away from reaching a goal, sometimes it’s just really nice to hear other people you respect to say: “Hey, this thing you’re doing? Don’t stop, because you’re good at it.”

Check out the rest of our interviews with this year's TED Fellows here.