There Is a Madness In This: House Helps in Nigeria 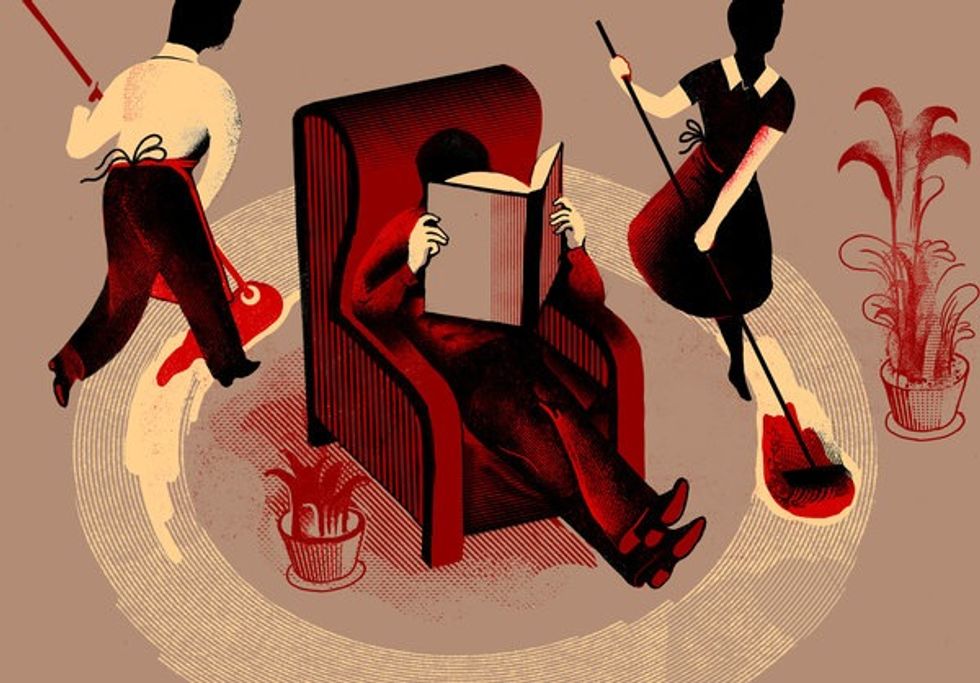 Reading Adaobi Tricia Nwaubani's personal recollection of growing up with omodo*, in The New York Times Opinion Pages this past Sunday, reminds me of my own childhood in Nigeria. I grew up in the United States, but traveled to Lagos often before eventually attending boarding school in Kwara State. Most of my engagement with Nigeria as a child followed the pattern of confusion, irritation, and partial acceptance. I can blame that cycle on failing to understand difference at a young age, but now as an adult evaluating the prevalence of child domestic workers in Lagos escapes my naïveté and ignorance. The current situation in Nigeria is not simply about house helps - it involves growing rates of child trafficking, education, and mental/physical abuse.

During undergrad I received a grant to do research in Nigeria for two months on child domestic labor. In Lagos everywhere I turned an aunt, uncle, teacher, government official or friend would try to explain to me "you cannot understand because you grew up in the West." Some of these rebuttals detailed that customs surrounding the practice of domestic work had drastically transformed over the past few decades and "back in the day" things were completely different. Or that instances of sexual, physical or mental abuse were extremely rare. After all, shouldn't we place more responsibility on the parents who are willing to ship their children off to work in a stranger's home? I've witnessed both physical and mental abuse of these house helps, which makes me dismissive of the notion that the situation is not dire. The reasons, or rather excuses, are endless. I'm not naive enough to say they’re all irrelevant, but the denial begs the question: why do Nigerians have such a difficult time acknowledging that domestic servitude is a material and real issue affecting hundreds of thousands of people?

Nwaubani's recollection doesn't focus on children - but that's always been my concern. When I was working and living in Lagos a few years ago with family- I witnessed my Aunt go through 5 different house helps in 4 months. Each time it was a new issue- they couldn't clean well, they didn't follow instructions, they left my 2 year old cousin alone in the house, and of course they stole. These are of course valid issues, but always seemed faulty given the fact that they were mature expectations placed on children. During my research, I spoke with a government official in Lagos, who emphasized that if anyone had child house helps, they could and should be arrested. Of course, the person who set up my interview (also a government official) had 3 house helps that were aged 14, 15, and 17. The government official was indeed, putting on a show for my American sponsored research, which highlights how difficult it is to get Nigerians to speak candidly about the practice.

In her opinion piece, Nwaubani is most captivating in her address of how the dynamics of psyche have come to play a significant role in how we understand personhood in Nigeria. Her memories of her dad yelling at the house helps to stop singing remind me of when my Aunt, whom I love dearly, expressed incredulity that her 12 year old omodo thought that going to school was her God-given right. There is a madness in this- a madness that permeates many other aspects of Nigerian society- and is even implicated on the contrary when Nwaubani describes the house helps as having "a bottomless hunger that could never be satisfied, no matter how much you heaped on their plates or what quantity of our leftovers they cleaned out." This is an insanity that nonetheless illuminates how oppression can be simultaneously ludicrous and commonplace.

With that said, I have some issues with Nwaubani's comparison of Nigeria to the U.S. It reads overly simplistic in using the United States, which still faces a plethora of issues in realising equality across class, race, sexuality, and gender, as a comparison. In addition, I take issue with its publication in the NYTimes to a primarily Western audience, which in some ways reinforces the idea that American/Western values are superior to Nigerian notions of equality. However, it becomes difficult to defend Nigeria's ineptitude at addressing domestic servitude when many fail to perceive it as an issue that is integral to, and implicated in Nigeria's pattern of growing inequality. There is no simple solution to combating child domestic labor, or inequality throughout the country, but as a start we need to switch from a defensive position and sit on the sidelines, even if it's just for a second. This is what we need to grow: self-reflexivity.

**I won't waste my time posting pictures of child house helps (Where would I find them?). They are the definition of hypervisibility: that which is ubiquitous, yet never truly seen.