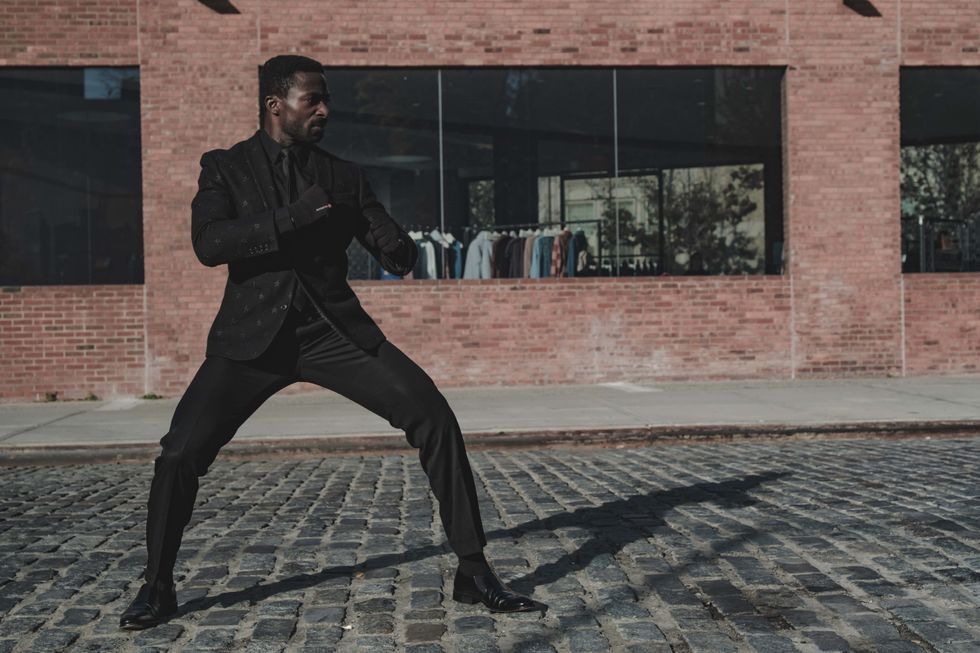 Femi Olagoke has worked on the set of major motion pictures, but he's currently celebrating one of his biggest roles to date.

Lagos-bornFemi Olagoke was in college when he decided that he would pursue a career in acting, so he did what any person with Nigerian parents would do—he got a degree in business administration. His plan was to get a job in the corporate world to support his passion. After all "struggling artist" doesn't exactly qualify as a legitimate occupation in everyone's book.

He never did find that job though, his physical strength, acquired form years of sports training—he went to the University of Missouri where he ran track and field—made him uniquely qualified for work as a stuntman in major motion pictures and television series, including Avengers: Infinity War and Luke Cage, just to name a few.

He was working as a stuntman on the set of Black Panther when Ryan Coogler asked him to perform a few lines. He delivered, and is now billed in an acting role in the blackest, and most monumental film to hit theaters in years. We're guessing, that things can only up from here.

We caught up with the actor to discuss some of the technical parts of working as a stuntman and making his way on to the big screen in Black Panther. Read on for our conversation with Olagoke.

Can you tell us more about the role that you play in Black Panther?

I play a Nigerian militant, in the opening scene of the movie.

Normally you work as a stuntman?

Yeah, I do work as a stuntman, I am primarily an actor, but because of my skillset and what I can do physically it helps as well. That's how I got this opportunity in Black Panther.

Wow so what's been the most challenging thing you've ever done as a stuntman?

I had to launch myself into this wall that had a big mirror on it. I had to hit the wall, then bounce off and hit the table, then hit the ground. So basically, I had to fall from a really high distance and hit the ground hard. It's not that it was challenging, but there was a lot of danger involved, because if I didn't do it right, you know, it wouldn't end well. But, fortunately, everything I've done so far has gone pretty well.

Glad to hear that. So it was your stunt work that led you to get your role in Black Panther?

Yeah, I was hired as a stuntman. But while I was on set, Ryan Coogler looked at the people he had and he chose some people to deliver certain dialogue.

Well, [getting the part was a mixture] of the experiences that I've had and the people who know you in the business and can vouch for you and your skillset. I had to send in a video of me doing fights and stunt work. So it's based on your experience, your skillset, your reputation and what you've done in the industry. So everything you've done helps. I think it's a combination of everything.

What was it like being on set working with Ryan Coogler and the cast?

It was great, such a wonderful experience. It was very rewarding and satisfying.

It just felt good because we were doing something historic, and it's something that's close to home on so many levels, not just for me, but I know so many other people relate to it. So that feeling was there the whole time. Everyone was just happy to be there. Even though we knew the stakes, and what was at hand, we still had a great time. We all knew we wanted to deliver something great for you guys. Ryan is a very humble and focused director.

So you get to flex your Nigerian accent in the film?

Yeah, I mean it was like talking to one of my buddies, it was very comfortable and rewarding. Some time last year I got to audition for a part, I was going to play a Nigerian and they asked for the audition not only in a Nigerian accent but also in Yoruba. So that was my first time ever doing something like that in my career. It felt so good.

There's something in discussion with my reps, but I can't talk about that yet. When it's time, everyone will know. It's still such a surreal experience to say I was in Black Panther.