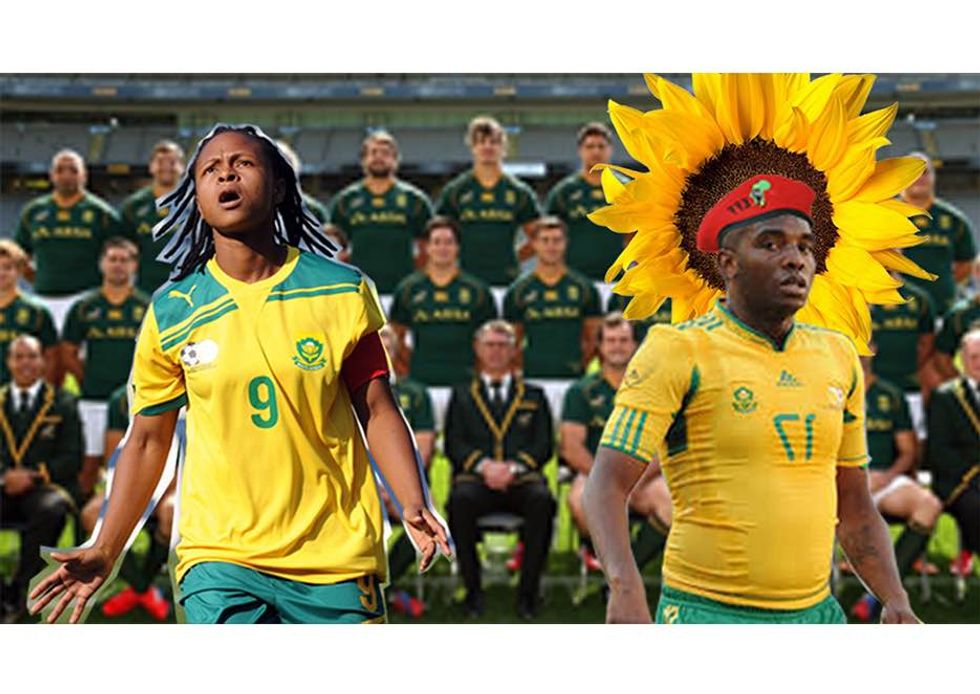 The Republic of South Africa. The Rainbow Nation. An insipid idea birthed under the naive belief that reconciliation would mend all fences and every man, woman and child of every race, culture and creed would live in a post-racial society devoid of the remnants of almost 100 years of oppression and discrimination.

Fast forward to 2016 and we live in some of the most uneasy times in South African history. Racial tensions are boiling over, issues of class and privilege are vigorously being interrogated and we’re seeing the thin veneer of the once revered ‘Rainbow Nation’ slowly peel away to reveal a decaying cavity that instead of being treated was covered up in hopes of it healing by itself. At the forefront of this conversation are young people, young people who have realized the severity of the unequal times we live and want to make an active change to the status quo.

One of the many young people engaged in these conversations through their respective mediums is 22-year-old Joburg-based digital artist Tiger Maremela. Tiger created a multimedia digital art piece interrogating various notions of the ‘Rainbow Nation’ such as capitalism, land redistribution, assimilation, black excellence and other intersectional issues like male masculinity and the politics of blackness.

‘’The series is an 8-part interrogation of the Rainbow Nation myth that we were fed in 1994,” says Tiger. “As young people that have inherited this blatant lie, we are becoming more vocal in speaking about social injustice and the inequality that exists along various lines including race, gender, (dis)ability, class, sexuality and various other parts that make up identity. roygbiv is a way of deconstructing this myth and showing how and why it is a lie. It is a way of reimagining ourselves.”

Tiger takes you through a complex and often overwhelming journey in the series, aptly titled roygbiv, a mnemonic device used to remember the colours of the rainbow, addressing subjects like the hotly-contested land redistribution issue and how sports have become a vehicle for “nationalism” in post-Apartheid South Africa. The interlude of the series is an empowering homage to the often forgotten women that have been at the forefront of liberation struggles such as Winnie Mandela, Helen Joseph and Rahima Moosa.

The latter part of the series is a visceral look at the shocking statistics of depression and mental health in the black community. The conclusion is a juxtapositional look at society’s obsession with male hypermasculinity and the constant and active erasure of queer and transgender representation in society. It’s the best and most striking part of the whole series.

The façade of the ‘Rainbow Nation’–now in its 22nd year–has been South Africa’s longest running soap opera for a while now, with as many twists and turns as you’d expect from a weekly episodic TV show. There are the sinister villains of the Apartheid era, and their heirs apparent, and the resilient stalwarts of the resistance, whose selfless sacrifices eventually ushered in the introduction of democracy in 1994. But like every ying has a yang and every hero has a nemesis, sometimes the hero reigns with an iron fist and eventually blurs the line between right and wrong. Art often imitates life, and vice versa, and the same reigns true in South Africa.

One of the most famed instances of a white knight becoming a treacherous outlaw is filmmaker Christopher Nolan’s critically acclaimed movie The Dark Knight. One of the characters in the movie recites a line that pretty much sums up the theme of the whole movie–and the state of the Rainbow Nation. “You either die a hero or live long enough to see yourself become the villain.”