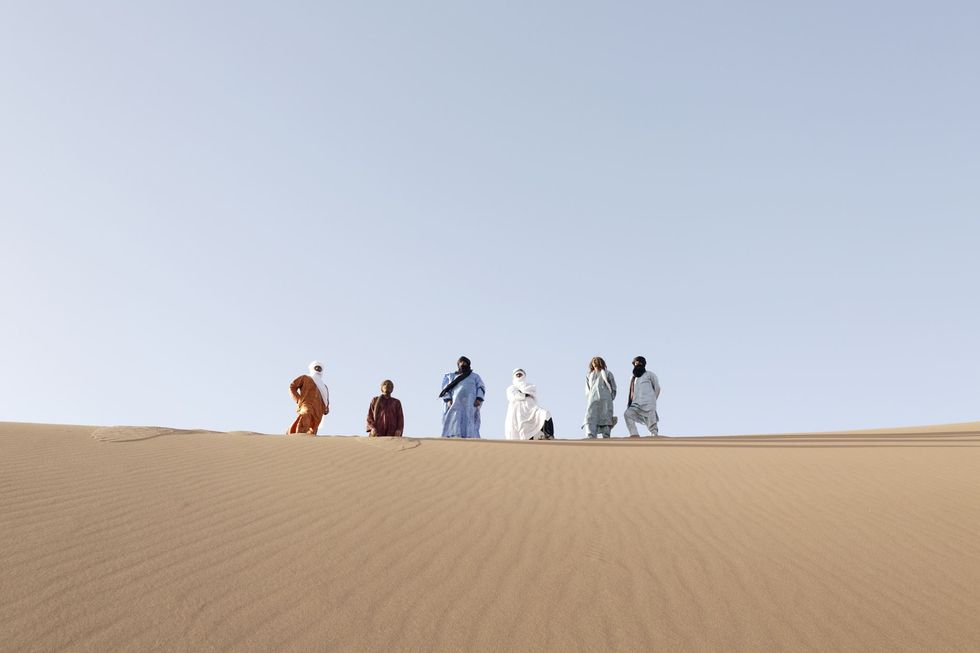 Much like reggae, the critically acclaimed sound of Malian guitar group Tinariwen was born out of necessity, a direct response to the widespread independence of 1960s North Africa.

Tinariwen founder Ibrahim Ag Alhabib was one Tuareg exile who left his home country of Mali as a child. Armed with a group of like-minded musicians he met during military training in Algeria, Alhabib tapped into his people’s need for rebellion to flesh out Tinariwen’s sound in the late '70s.

Popularly referred to as tichumaren (coined “desert blues” in the West), Tinariwen combined Middle Eastern and African folk traditions with the urgency and melancholy of American rock and the blues.

For decades, Tinariwen wrote, recorded and performed explicitly for the Tuareg people without ever releasing a record. Eventually their music was disseminated through bootleg tapes, given out for free to anyone who could supply a blank cassette.

By the time Tinariwen had released a proper debut, they were a band of highly-skilled musicians and former militant rebels who’d spent years polishing their craft, honing their message, and peacefully resisting the powers that be.

Since then the Grammy-winning ensemble has collaborated with dozens of mainstream rock acts like Nels Cline and TV On The Radio, but the original appeal of their sound never faltered. In short, it’s because Tinariwen’s message never lost its relevancy–their collective struggle persisted.

In more recent years the mountainous desert region between Algeria and Mali that Tinariwen call home has been declared a combat zone. Rising independent factions have targeted the music of Tinariwen for breaking Sharia law, going so far as to abduct founder Alhabib for several weeks.

Elwan, the group’s seventh studio album in sixteen years, seems to address these more recent concerns with a record that feels more weathered, hardened by time and pain, than any of their previous efforts. There are energetic and uplifting tracks to be found, namely album opener “Tiwàyyen,” but the more quiet and restrained moments on this new record are surely its most impactful.

On “Ittus,” a lone vocalist ruminates on time in a mantra-like repetition of lyrics, “I ask you, what is our goal/ It is the unity of our nation/And to carry our standard high.” A similar sentiment is illustrated on “Ténéré Tàqqàl,” an ode to their desert home that vividly describes its current state of desolation:

The Ténéré has become

an upland of thorns

The gazelles have found refuge

high in the mountains

The birds no longer return

to their nests at night

The camps have all fled.

You can read the bitterness

In which all solidarity

Elwan’s namesake is derived from the word “elephant” and used to portray the formidable and potentially dangerous forces that rule Tinariwen’s home. “[Elwan] talks about ‘the elephants’ who are destroying everything they come across,” bassist Eyadou Ag Leche told Quietus in a recent interview, “This is a metaphor about the big companies, the corrupted politicians, and the extremists. The Sahara is populated by more and more obscure powers and our people and environment have been in between all this chaos for years now."

Despite its scathing message of political critique, Tinariwen’s newest album never feels incendiary. Instead, Tinariwen express longing through stark melodies and sprawling, polyrhythmic blues vamps, and through the conjuring of memory.

Translated Elwan lyrics are rooted in the North African Sahara’s physical geography, steeped in a deep nostalgia for what once was. For a time when Tuareg nomads could roam the desert at will, undeterred by borders and militarized governments, living off the land and in peace. It makes for a remarkable and devastatingly beautiful record.