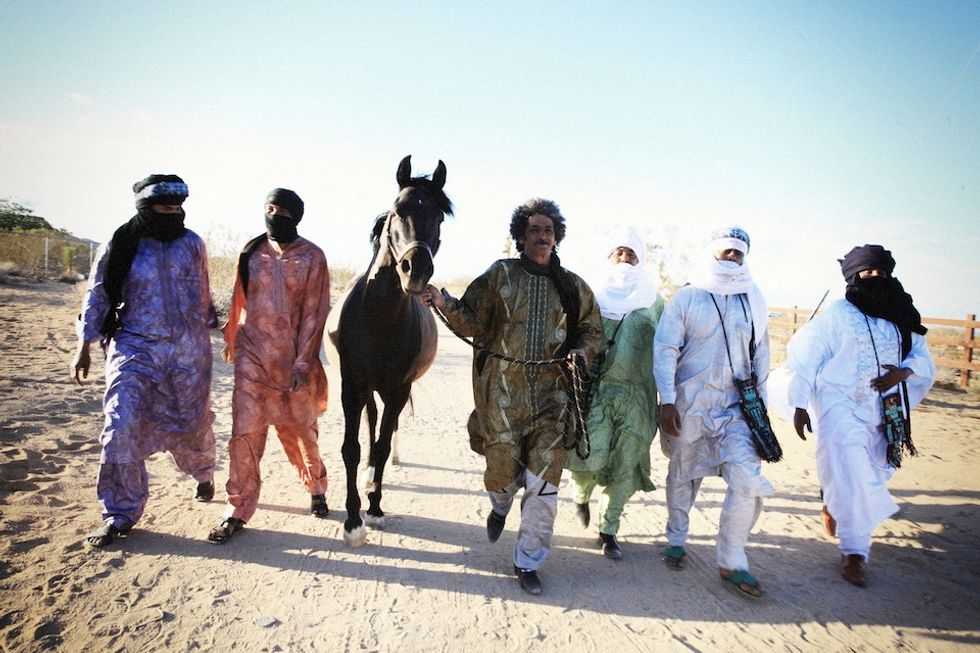 Okayafrica caught up with Tinariwen in the lead-up to 'Emmaar,' one of their most comprehensive, contemplative and layered offerings yet.

Okayafrica: What does Emmaar mean?

OKA: Most of your work has been recorded in the Sahara. What was it like recording in Joshua Tree, so far away from home?

Alhousseyni: It is difficult to feel at home when you are not at home. But we recorded the album in great conditions, especially because we were recording with friends, like [Production Manager] Bill Rahmy who has toured with Tinariwen many times already. Even being abroad, we did not feel too distant from home because we were with friends, and also because of the environment we were in. When we would look outside, there were no buildings in sight. Only desert. So we felt a lot of freedom being in Joshua Tree.

OKA: With Tassili, you had to bring a lot of gear over great distances into the outdoor area where you were recording. Was this a similar outdoor setting? What was the studio set up like?

Alhousseyni: It was different. In Joshua Tree, it was in our friend Bill Rahmy’s house. And we recorded live in the house, with all of us in the same room. So it was different, but it also felt very much the same. Even if we were not outside, we were still in the desert so I didn’t feel much of a difference when we recorded.

OKA: How would you compare the sound on this album compared to previous ones? How much did the location affect it?

Alhousseyni: The only difference may be from the gear and studio-set up that we had. The music and the inspiration is still very much the same.

OKA: Like Tassili, you have some international collaborations on Emmaar, with Josh Klinghoffer, Matt Sweeney, Fats Kaplin, Saul Williams. How did those collaborations come about?

Alhousseyni: I don’t really know how it was decided who would collaborate on the album. I would just find them in the studio, and we would just start playing together.

OKA: Was the decision to include Fats Kaplin’s fiddle playing on “Imdiwanin Ahi Tifhamam” at all influenced by the imzad [Tuareg fiddle] that can be heard in traditional music?

Alhousseyni: Yes you are right. That song definitely has the same vibe as traditional songs that contain the imzad. And the [American] fiddle fits those lines perfectly. [Fats Kaplin’s] part assimilated really well into the melody.

OKA: Tinariwen’s music has always been political to an extent. You have always been very involved in the shifting political dynamics of the Sahara. And now, considering what has occurred in northern Mali over the last few years, I think people would assume that Emmaar would speak a lot about politics. What is the central political message of this album, for those of us who do not understand Tamashek?

Alhousseyni: The first song on the album, “Toumast Tincha,” encapsulates the whole album’s political message well. “Toumast,” in Tamashek, means community or people and “tincha” means sold. So it means “the people have been sold.” This is the feeling we have when we think of the conflict that is happening now. We feel like we have no control over what is happening and that since the beginning, it’s been a technical war between many powers – Mali, Algeria, France, Burkina Faso. These wars have been thrust on our heads, without our control over them. We have been sold to these powers that are beyond us. And also the Islamists that appeared a few years ago say they are against France and the US, but you never know what the sides are or whose side anyone is on. And then right in the middle of all this, is this community [the Tuaregs] who are suffering the effects. So the central message is that our people have been sold out by these external forces.

OKA: Tuareg music is thousands of years old. But it seems like electric guitars have become the major component of what international fans see as “Tuareg music.” So many bands have followed in your footsteps—like Terakaft and Bombino. Have you found that your style has slowly become the style representing your people? Have people accepted you as their messengers or do you find that there are those who don’t like the way you have incorporated modernity into your music?

Alhousseyni: It is true that Tinariwen’s music doesn’t fully correspond to our traditional music. But all the lyrics do correspond to the current and past life of the Tuareg community. So that is the link between our music and traditional Tuareg music. Our music does differ from traditional music, but the spirit of it is very much the same. Like for example, many of the lyrics that I write are taken from old Tamashek poetry. So it is great for young people who maybe do not know about this long poetic tradition or our old way of life, but also for older people who are happy to hear those words again.

OKA: How do people at home consume your music? I know when you first started, there was a strong cassette culture, where people would make bootlegs and pass them around. Does that culture still exist? How do people get a hold of your latest songs back in Mali?

Alhousseyni: There is no official distribution of our music back home. But somehow people always find a way to get the music— maybe not the real CD, but they find a way to get a copy. We will bring the CD back home from abroad and so will our friends, so it gets distributed, but not in any official way. Some people are still using cassettes as well, especially people in the desert. And people are always passing around mp3s with their cell phones.

OKA: Looking at your tour schedule, it is like you have become global nomads, constantly on the move. Do you ever get to go home? Is it safe for you to go home?

OKA: Does the band have any future plans beyond touring?

OKA: Lastly, how are you liking New York?

Emmaar is out now via ANTI-