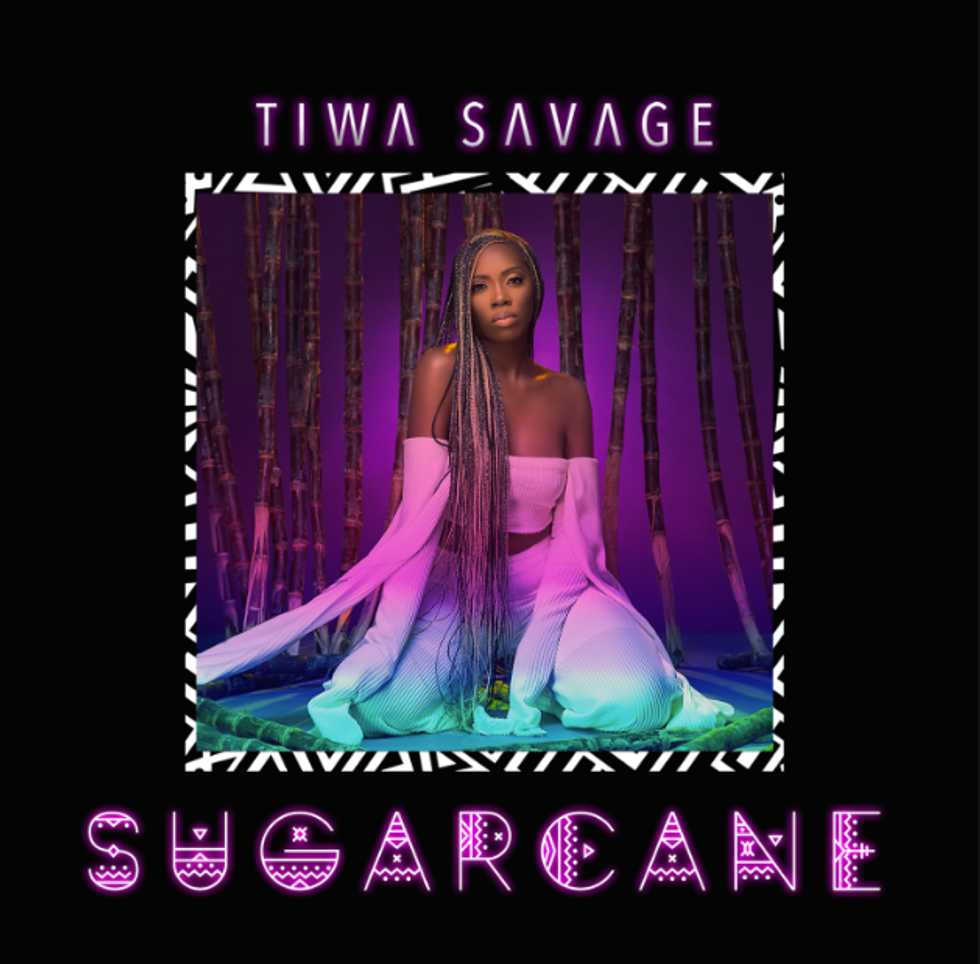 The Queen of Afrobeats, Tiwa Savage, delivers another surefooted EP, ensuring her dominance in the afrobeats music sphere.

Tiwa Savage told us she had no plans to put out a project this year until she decided to assemble this Sugarcane EP.

“All Over,” her first big single of the year, is closing in on 8 million views on YouTube, and has since been followed by cross-national collaborations with Awilo Longomba in “Esopi Yo” and Diamond Platnumz on “Fire”.

Signing to Roc Nation already made Savage’s global ambition clear, and early in September she further cemented that by performing at Jay Z’s Made In America festival.

As if to give an idea of what kind of company she keeps these days, she posted a video of Coldplay’s Chris Martin Naija two-stepping to “Ma Lo” on her Instagram page.

Savage’s two full projects—2013’s Once Upon A Time and 2016’s R.E.D—have been fully realized records of surefooted writing and well-chosen production, ensuring dominance in the afrobeats sphere and elsewhere on the continent.

Her new project, Sugarcane, is the EP that makes the case for other acts making EPs over albums. Brevity sharpens focus, or simply leaves little room for fillers, making for great replay value for Sugarcane. Twenty listens in one weekend and one isn't bored or sated.

Both Tiwa Savage and Wizkid combine well on “Ma Lo” as they did on their last song together, “Bad,” off R.E.D.

Produced by Spellz, the melodies on “Ma Lo” are more satisfying, helped by the soothing beat—as well as memorable phrasing that don’t mean much “robo ske ske, robo ske ske” the Pon Pon playbook that is Tekno's “Pana.”

House beats, like juju, are easy sells but Spellz’ own combination has got extra delight on the titular track “Sugarcane,” where Savage’s already honeyed voice, good enough in the verses, is even more effective when she coos the words “something wey sweet like sugarcane” just when the beat breaks.

Savage’s singing straddles Spellz’ beat through its peaks and troughs and the writing, once again, is mature. Another writer would have multiplied the entendres on “sugarcane” for being sweet or phallic, but Savage is an experienced hand and shows restraints.

Mavin Records' First Lady may sometimes draw from Beyonce’s aesthetic in her videos and live performances—who wouldn’t?—but her strongest vocal twin is Brandy.

This is less clear when she sings in Yoruba or pidgin, but undoubtable when the lyrics are mostly in English as in “Hold Me Down.” It may just be the rasp in her voice or the specific ways she harmonizes, a similarity which this listener is only hearing for the first time.

“Me and You” is interesting for several reasons. The naked dembow beat may draw comparisons to Drake and Wizkid’s “One Dance” (rightly for wrong reasons), but the real likeness, if there’s any, is with “XO” by Beyonce.

The song's produced by Maleek Berry, who also provides the background vocals, his nasal singing voice adding good texture. The real interest here is in Savage’s songwriting which, as is elsewhere on the EP, is as precise as you’d expect from an experienced songwriter but never intimate enough to feel personal to her.

“It’s 6 in the evening, I’ve been in your arms all day/I don’t want to get away, your love dey make me stay" or  “It’s 2 in the morning, your eyes say come to me/the moon is the company, I love this your ecstasy,”

In both cases the specific timing promises some specific detail—whether real or imagined—but then followed by commonplace lyrics.

No fan is owed insights into any artist’s life but Savage’s tales of marital strife which played out in the media last year are noticeably absent in her lyrics and music.

Marvin Gaye found new completion on “Here, My Dear,” which was largely about the breakup of his marriage to Anna Gordy. Beyonce also found hers in Lemonade, made even more special by the big apology that is 4:44.

Perhaps these heights, or depths, are still to come for Savage or may not be at all, which is also fine, but there sure is scope for more.

This spoilt listener isn’t complaining though. Each song on Sugarcane is well produced and well-written and of course well sung.

Full marks all round.