Why I Africa: On Traveling The Continent As A Black American 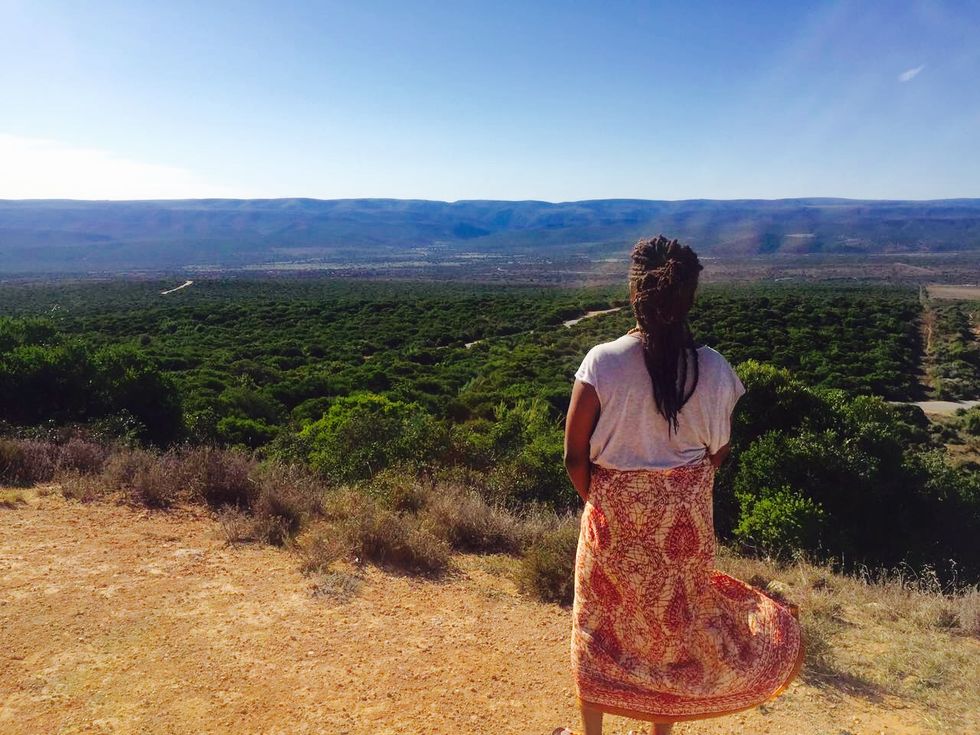 Nereya Otieno explains why for a new generation of African Americans, visiting the continent is about meeting Africa where it is.

In the month and a half I’ve been in South Africa I’ve hung out in big cities like Cape Town and Johannesburg and driven through the desert of the Northern Cape. I’ve chatted with desert folk and passed through quirky little towns like Springbok, known for rugby and racial tension. I waited two hours for a 17-year-old to help mend my tire just outside Sun City, South Africa’s Las Vegas. In all these places one thing keeps happening—people ask why I am here.

This is a common question. When I moved to Copenhagen, Danes could not understand why I had left sunny California for the frigid north. A brief trip to Amman had shop owners and waiters doling out quizzical looks accompanied by “why here?” It’s natural to be curious. But here the question is a bit deeper — a few of them have even asked me outright: “Why are so many black Americans suddenly coming to Africa?”

Firstly, black Americans are simply traveling more. More of us are going to school, starting businesses and making salaries—all things that enable travel. Crossing the Atlantic ain’t exactly cheap and there aren’t as many flights going to Africa as to Europe, but a growing number of us can actually afford it. That is a huge factor. But, of course, there is more to it than that.

Like many people, I have a parent from the continent. My father was born and raised in the countryside of Kenya. Life happened, planes were taken, he met a lady he liked and—some time later—my brother, sister and I were born. I was raised in the San Francisco Bay Area by an American woman and an African man. Due to environment, my childhood was 90 percent American. But there was also that 10 percent — that crucial bit of my home that was built upon my father’s shoulders — his Kenyan habits and his African pride. As I’m sure many Okayafrica readers know, being a first generation kid — whether for one parent or both — involves a certain degree of compromise.

The author driving through the Free State on the way to Lesotho. Photo courtesy of Raber.

Some of me loved the bright tapestries and paintings hanging around the house, driving to school listening to Koffi Olomide and Them Mushrooms and getting to eat ugali with my hands for every meal. I loved it all—but I loved it at home. Because explaining ugali to a friend who wanted mac n cheese was uncomfortable. Because wearing the beautiful fabrics my grandmother would send did not make me feel beautiful at school, they simply made me feel different. Being African was part of my black American identity but not something I dictated. For that reason, to have my name mispronounced was all the ‘African’ I needed for one day.

I believe there are three reasons for this: 1. I was young, naive and trying to fit in; 2. those first-generation woes; 3. Africa wasn’t cool.

Anything I wore that was Kenyan would be looked upon as tribal, but tribal didn’t mean traditional—it meant barbaric. In fact, the only time I recall it being accepted was when, every December, my teachers would awkwardly ask if I would do a presentation on Kwanzaa, then look at me blankly when I said, “Sorry Mrs. So-and-so, I don’t celebrate Kwanzaa. I don’t even really know what it is.”

Growing up, it felt like Africa had to be invited. Someone had to welcome my bringing Kenyan food, music or clothing to their day. When you’re young—and I was one of very few black kids in my community, never mind African—these deviations had a great impact on the way I thought about myself.

The author in an open discussion about race, creativity and all else with Imraan Christian at The Nest Space in Cape Town. Photo courtesy of Creative Nestlings.

As I got older, I started embracing this difference. Eventually, those fabrics made me feel beautiful. I started flashing more of what my father called ‘good, Kenyan teeth,’ though I have not the slightest clue what he actually means by that. I also started asking questions, started digging for answers as to what my Pops’ life was like in the outskirts of Kisumu. I started pressing my grandmother for recipes and stealthily trying to trick her into giving me her old jewelry. I pushed my grandfather to buy imported, Kenyan beer (three cheers for Tusker at BevMo!). Some would call this finding my way back. I disagree. I was finding my way forward.

Because my roots are not strictly African. As beautiful as I’m sure it is, my father’s Kenya is not my Kenya. It never could be and it never should be. I am not him and Kenya is not static. As much as love and pride are passed on, they certainly are not inherited. I love that I am Kenyan, I love that I am African—but I cannot love Kenya nor Africa anymore than I can love Colin Farrell. I simply don’t know it. Now I am here for that introduction.

Some may ask why I’m in South Africa. Part of the reason I landed here first is because South Africa is a most peculiar place. When I began hearing about #FeesMustFall and reading books by the “Born Free” generation, I desperately wanted to know about it for myself. I wanted to see how a country with such a charged history is faring. I came to see.

That is the reason why myself and others are making it a priority to see the continent for ourselves. A section of this land harbors a culture I look like, a culture I want to represent, but a culture I’m actually not acquainted with. I could imagine for those who don’t have the privilege I have of knowing which country and tribe they stem from, reading about African cultures and getting the opportunity to touch the soil is their first step in getting acquainted. I think that’s why publications like this one are important — they serve as a gateway for learning about where our parents’ pride comes from, allowing us to translate it into our own, contemporary versions.

And not only American blacks, but many of the African folks I’m meeting are also desperate to see Africa. Based on conversations I’ve had, a common dream for a young African a decade ago would be to go to New York or London or Paris. Now, Africans are talking about Africa. A young South African designer I met was telling me how badly he wanted to go to Kenya; a chef was gushing about her desire to taste Ghana. I do not believe this to be some sort of fashionable fad but rather a shift in representational ability.

So why am I coming here? Why am I in South Africa and planning to make my way to my native Kenya? One—because I can. Two—because I want to know it for myself. I want to know me. I want to build a relationship based upon an actual, lived conversation.

Nereya is a writer, thinker and sandwich-eater who can often be found proudly multitasking at all three. Check her at her website or instagram.

At left is a photo of Nereya and her older brother, Emmanuell, on her first trip back to Kenya in 1994.