Watch Trevor Noah Visit His Grandmother in Soweto to Discuss His Upbringing, Apartheid And Nelson Mandela 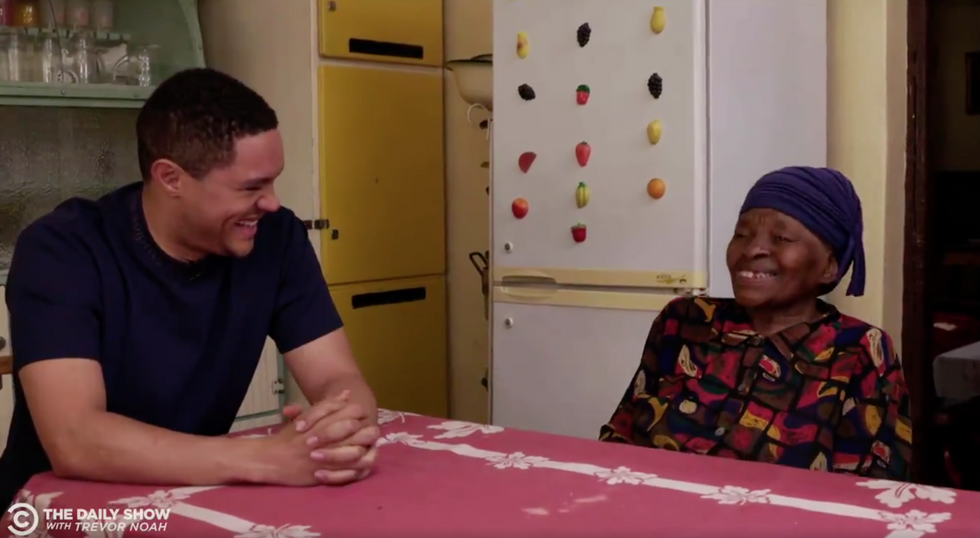 South African comedian and host of The Daily Show, Trevor Noah was in South Africa for the Global Citizen concert, which took place last week Sunday. While he was here, Noah shot an insert for The Daily Show of him visiting his 91-year-old grandmother in her Soweto house.

The two discuss the horrible conditions black people lived and worked under during apartheid, raising a biracial baby when people of different races weren't allowed to be together, Nelson Mandela, and what Noah was like as a child.

"Working for no pay," she says. "Digging potatoes with your hands, and if one of the workers dies, they are buried, and potatoes are planted right on top of where they were buried."

On Noah being a biracial child, she says:

"When you were here, you gave me a tough time because you wanted to play on the street. There were kids who never knew what a white man was."

She adds that kids ran away from Noah because they thought he was white. She describes him as a child, as "energetic and really naughty," and adds that she used to hit him with a slipper when he was being naughty. "Those big bums, they know my slippers," she says.

Watch the insert below:

Trevor Chats with His Grandma About Apartheid and Tours Her Home, “MTV Cribs"-Style | The Daily Showwww.youtube.com

Trevor visits his Grandma Koko in Soweto, South Africa, to talk about his childhood, her life under apartheid, and… https://t.co/rBWFmlF8LU
— The Daily Show (@The Daily Show) 1543894863.0