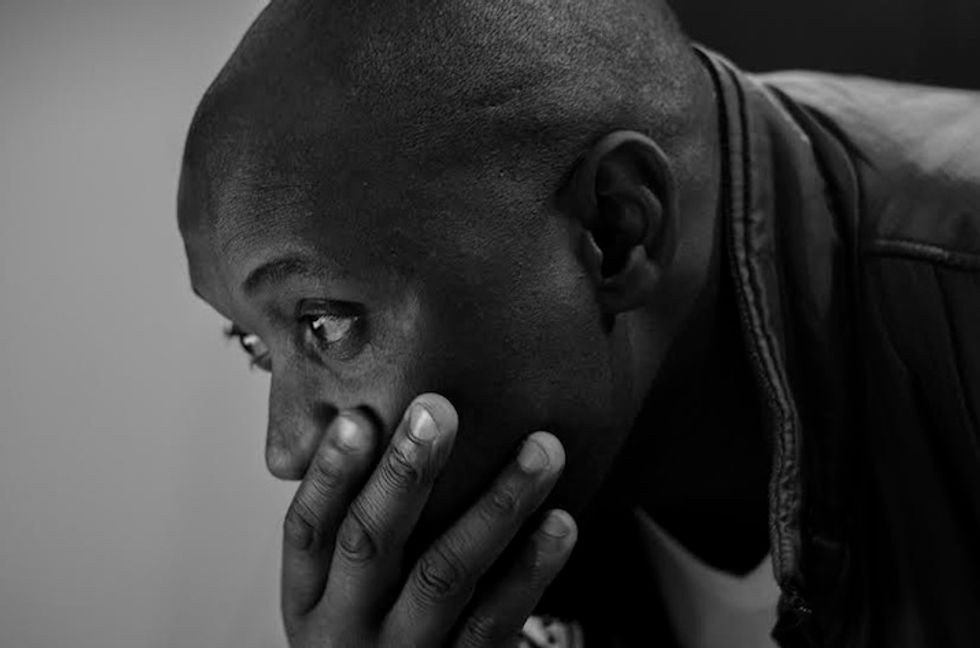 Trompie Beatmochini, veteran hip-hop producer from Pretoria, South Africa, had a great 2014. He was the beatsmith behind the music for motswako rapper Khuli Chana’s "Never Grow Up," and lent the same organic sound to Morale’s Kwesta and Lection-assisted "Buwa." He's also worked alongside South African hip-hop elite like Reason, Sean Pages, Mr Maliq, Boy Wonder, Flex Boogie, and Ill Skillz. Trompie's latest compilation, Men vs Machine, comes with the December issue of SA hip-hop magazine HYPE. We caught up with the tireless producer to talk his Beatmachine Music Group imprint, thoughts on "new age kwaito," working with Chana and more.

Sabelo for Okayafrica: Who is Trompie?

OKA: You also go by another alias, Bleksperm. Is that your alter ego? How's Trompie different from Bleksperm?

Trompie: Bleksperm is a rapper and trash-talking enthusiast while Trompie Beatmochini ain’t far off, but focuses on making music and not being vocal.

OKA: You've been producing for a minute now. You've worked with the likes of Maliq, Reason, Sean Pages, Morale, and Ill SKillz. But would you say working with Khuli Chana opened more doors for you?

Trompie: It actually did. In actual fact, the whole Morafe clan opened their arms and doors for me. I became highlighted even more when Khuli pushed boundries with the "Never Grow Up" single. Myself, Towdeemac, and J Smallz were also key influences in getting our brands out there.

OKA: Khuli's "Never Grow up" developed from a Quietude song you did a few years back. Can you explain that move?

Trompie: Correction. Quietude leased Khuli's originally requested instrumental. The instrumental was Khuli's but since I fell short financially, I leased it to Quietude. Khuli came back and wanted the joint. That’s when I recreated and remixed the original to become what today is known as the final "Never Grow Up."

OKA: Can you tell us about Beatmachine Music Group?

Trompie: Beatmachine Music Group was established in 2012, with "You Can Have It" as the theme song. After years serving a company I co-owned with my late friend, I decided to go my own way. Didn't have a name until one rapper called me a "beatmachine." I took that into consideration and made a company out of it. My Beatmachine team consists of Les-B, King-P and Roxxi Official.

OKA: Please take us through working on your latest compilation, Men vs Machine, which you did for Hype Magazine.

Trompie: First song, "Lost Generation" by Maliq opened ideas and direction. I was required to blend the old and the new, but still stick with the more old skool essence. "The Terminator" and "Total Recall" storylines came with too much old movie watching. I requested Power FM's Mallory Perett to do the narration. I then put together a mean team to make sure it came off proper.

OKA: And this may be a lazy question but, as a veteran, what do you think of SA hip-hop currently?

OKA: There've been a lot of cross-continental collaborations lately. Who are you looking to work with outside of SA?

Trompie:J. Cole, Dwele... I’d also like to do a Slum Village album.

OKA: What are your thoughts on "new age kwaito?"

Trompie: Hip-hop and kwaito coined into one name, I’m honestly not about that.

OKA: Who are your favourite "new school" producers in SA right now?

OKA: Please give us some insight into your relationship with Maliq.

Trompie: Dude is like God-sent. We indulge in deep convos before we can start thinking of working. He is the Guru (R.I.P), I'm the [DJ] Premier. Look out for stuff to be released soon.

Trompie: People haven’t realized that, annually, the Beatmachine Music Group soundscape changes. We never stick to one sound. Neither do we conform. As the head producer, I will mos def be bringing new work pretty soon. I have no pressure.