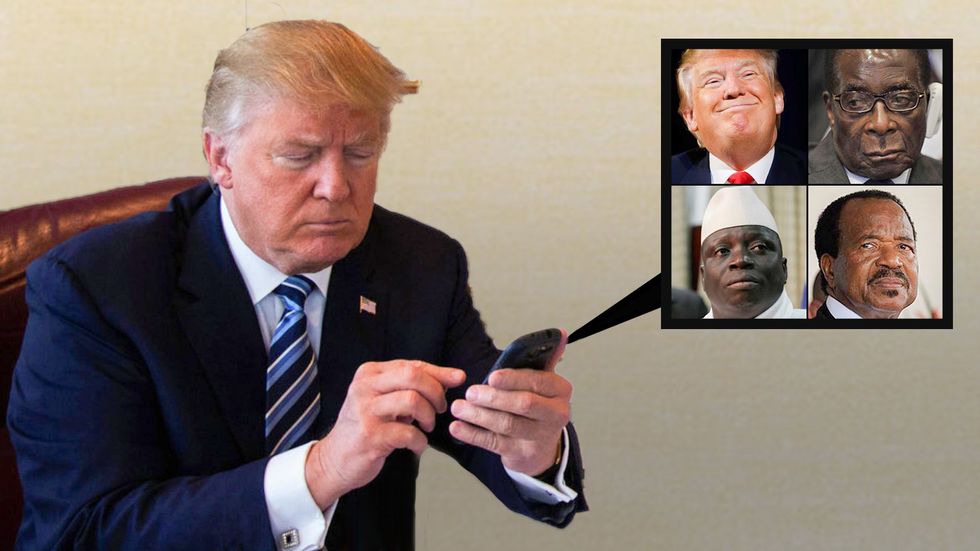 We've been leaked text of Trump's conversations with some of Africa's longest serving leaders.

Trump (US): Gentlemen, had to mute the group. Since the huge win, my notifications have experienced a tremendous surge.

Mugabe (Zimbabwe): It is ok Donald, we are proud of you.

Biya (Cameroon): Shut up, Jammeh. You should be removed from this group.

Mugabe: Biya, relax my brother. What would you have done in Jammeh’s position? ECOWAS troops were coming for him.

Trump: What is ECOWAS?

Biya: Mugabe, I guess you are right.

Jammeh: Shut up my friend. Your elections are coming next year and you will soon join me here. Keep talking rubbish there.

Biya: That is why your useless country did not qualify for AFCON.

Trump: What is ECOWAS?

Mugabe: Donald, it seems you are making progress on your wall against Mexico, good man, but I don’t understand the way you are paying for it.

Trump: Neither do I, but it’s going to be a very beautiful wall.

Biya: Yes, but can you not just print money and pay for it?

Trump: I can do that?

Jammeh: Can you not?

Trump: What is ECOWAS? Can they pay for it?

Jammeh: Donald, what is wrong with the women in your country, just allowing them to march anyhow. This is not the way.

Mugabe: Biya, that is an Alternative Fact

Jammeh: Donald, I am angry at you, my orange brother.

Biya: What did he do?

Biya: Is that an executive order? No wait, you don’t have any more executive power. Jesus is lord.

Jammeh: Donald, why are you deporting all the Muslims from America?

Trump: Muslims are bringing drugs, they're bringing crime, they're rapists and some I assume are good people.

Biya: I thought that was the Mexicanos

Trump: Gentlemen, Melania looks like she’s smiling, something must be wrong, I have to go.

Jammeh: Ok Donald, tell Melania she belongs in your kitchen and bedroom.

Biya: Be quoting Buhari there, that is why you don’t have any executive power haha.

Jammeh: But your name doesn’t show up on the list of the group chat.

Putin: We have best hackers in world.

Putin: Ok, I go work out now on horse.

Snowden: The world must see this exchange.