Tunisia Is a Nation Divided and United by Football 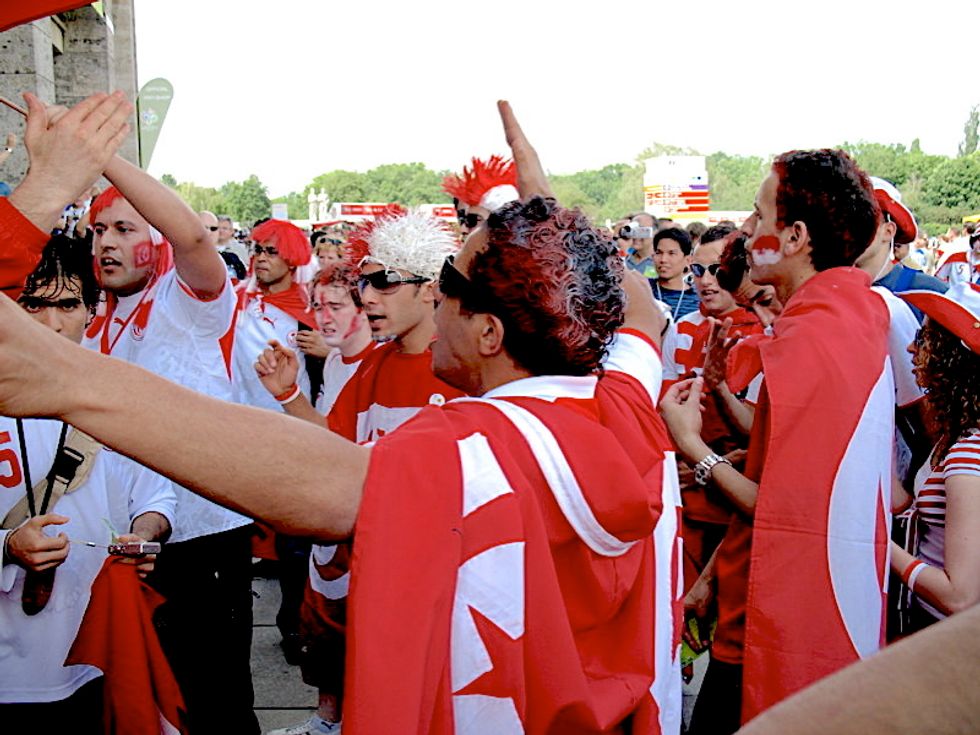 The national team is the country's great equalizer, up to a point.

Tunisia's national team, the Eagles of Carthage, are arguably small fish in the big pond of the World Cup. But every team lost to the annals of the group stage (if that is indeed to be their fate—don't be so sure) is still the product of a vibrant national football culture.

An occasional victim of small country syndrome–it has existed within huge empires, the Romans, the Umayyads, the Byzantines, the Ottomans and the French, and now is often overshadowed by Morocco and Algeria–Tunisia has a rich but sometimes tortuous history, and this is also true when it comes to football.

National athletics were often drafted into the PR and propaganda machine of Zine El Abidine Ben Ali's authoritarian regime, which was brought down by the 2011 revolution known to Western media as the Jasmine Revolution and within Tunisia as the DignityRevolution. Driss Abbassi, in "Sport, political legitimization and the construction of identity in 2000s Tunisia," notes that the 2004 Mediterranean Games in Radès were an occasion for Ben Ali's government to capitalize both on athletic teams as national symbols and on the past glory of Carthage—a jewel of southern Mediterranean antiquity whose capital lay on the outskirts of the modern city of Tunis.

The instrumentalization of the Eagles of Carthage by the regime was a two-way street: Tunisian media in those days was often critical of the team as a roundabout way of criticizing the government by proxy. "In pre-2011 Tunisia," analyzes journalist Souhail Khmair, "public supporters of the [national team] were considered to be sellouts or blind followers of the Ex dictatorship regime… up until today, there are those who still believe that the government is trying to keep us blinded from the real troubles and issues by shifting our focus towards football."

Football always has the potential to be an opium of the people, but the current government of Beji Caid Essebsi has not openly made a point of politicizing the sport—perhaps because it can make use of different selling points now, like Tunisia's label as "the Arab Spring success story" and as a leader on women's rights in the MENA region (not that these labels tell thewhole story). There has also, until recently, not been much to co-opt. Journalist Farouk Abdou analyzes, "Qualifying for the World Cup has renewed the team's dynamism a bit, even if it also serves to cover up problems elsewhere in the world of Tunisian football."

Elsewhere in Tunisian football—namely in its top professional tier, Ligue 1—far from being a distraction from social issues, the sport has long been a site of chaos and an outlet for social tensions. Ligue 1 games draw the support of thousands of young men who find a sense of identity and solidarity in communities of ultras. "In a country where the marginalization of young people is structural, belonging to a strong group that defies power is not without importance for young men in need for affirmation," reports journalist Malek Lakhal. These strong groups of ultras sometimes find an outlet in ear-shattering pyrotechnics displays, and sometimes in violence. Ultras were active in the streets during the 2011 revolution and today are often targeted and criminalized by the police, and stadium violence has gotten worse with time, coming not only from fans and police but also from coaches.

News of these exploits has even reached the shores of the motherland of football hooliganism: British tabloid The Daily Star recently r aised fears of violence from "bloodthirsty" Tunisian ultras during their country's pool match with England. Setting aside whether this a case of the pot calling the kettle black (or of racist tropes being deployed), these fears are ill-informed: as Lakhal explained to me, "ultras identify far more with their club or neighborhood than the national team...they are bored out of their brains at the national team's games" if they even attend. The two kinds of football fandom available to Tunisians are almost polar opposites.

If the league is where social conflict comes to a head, then the national team is the great equalizer—up to a point. In Tunisia, as in other North African countries, the cultural monopoly of Mediterranean coastal cities remains strong. This trickles down into football clubs—the big 4, Club Africain, Esperance Tunis, Etoile sportive du Sahel, and Club sportif Sfaxien, are all based in big cities on the northeast coast—and so into the national team for which they are feeders. "In all fairness [to its naysayers], the National team only represents the northern section of the country, says Khmair. "There are huge football fans in southern parts of the country that have never had the chance to watch the team play in person."

Still, even if not all Tunisians have equal access to the team, almost all of them will rush to watch it play, if only on TV in a cafe. The Eagles of Carthage are a beloved national institution—not because the national identity is particularly strong, but maybe because football fandom is dynamic and inspiring enough to unite people with disparate identities. The national team itself is diasporic, composed of Tunisian players who have in some cases never lived in the country and whose careers take them to Europe and the Gulf, but this has not been an obstacle to team spirit: for Abdou, the team is "a beautiful model of cohesion and integration of expatriates" and in this sense, "a great example of openness that should inspire Tunisians."

The team's FIFA ranking at #14 is a first in its history and a sign of hope for a squad that has never entered the tournament's knockout stage. But the algorithm reflects things like performance in past regional tournaments, rather than a chance at winning in the future. "A strong start in 2019 Africa Cup of Nations qualifying and getting out of a challenging group to qualify for the 2018 World Cup has helped [head coach] Nabil Maaloul's men to a 14th place, but many do feel that they will soon be knocked off their perch," journalist Maher Mezahi tells me. Tunisia is far from the strongest African team that qualified for the World Cup. That said, it would not be accurate to characterize the squad as a collection of lightweights.

Certainly, the odds are stacked against its advancement from the pool stage: it would have to eliminate England or Belgium, and all without its star striker Youssef Msakni—but these are matters of bad luck. Tunisia is, in and of itself, a tight-knit and appealing side. Its players' solid camaraderie was apparent in a recent warm-up friendly against Portugal. Despite a few jitters, the team held its own against the (admittedly Ronaldo-less) Navigators, playing to a draw in a well-coordinated and spirited game. Maybe I'm biased, but you could do worse than root for them.