Nigerian Visual Artist Uche Okpa-Iroha Inserts Himself Into 'The Godfather' 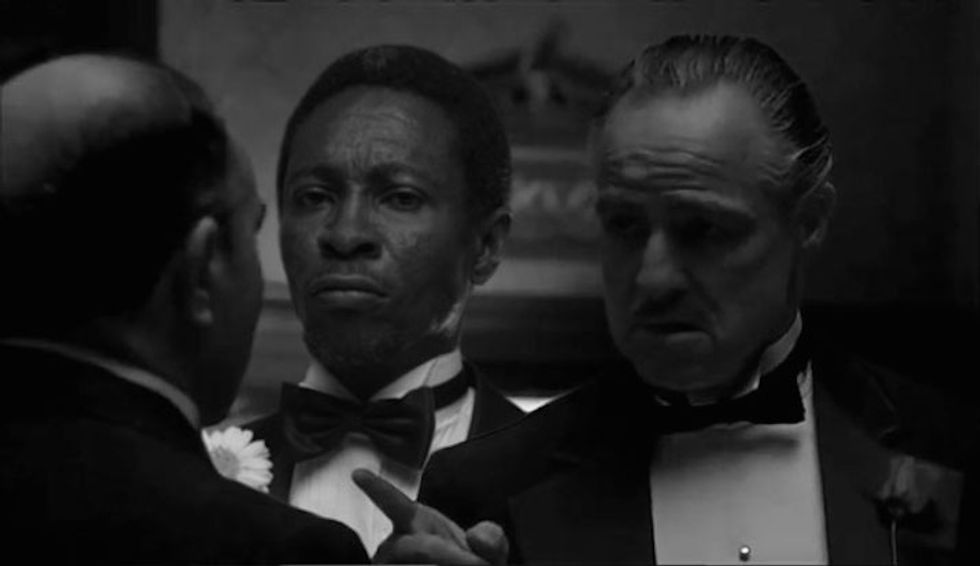 Nigerian visual artist Uche Okpa-Iroha digitally inserts himself into stills from 'The Godfather' for 'The Plantation Boy' photoproject.

The Plantation Boy by Nigerian photographer and visual artist Uche Okpa-Iroha, which we spotted via the Guardian, is a photo manipulation series depicting the digital insertion of the artist into key scenes from Francis Ford Coppola's seminal gangster film The Godfather. Okpa-Iroha created the conceptual series in 2012 with the intention of paying tribute to The Godfather's 40th anniversary while questioning the film's racial myopia and addressing on a larger scale issues of identity and representation within mass media. Though his Plantation Boy character primarily exists on the fringes of the Corleone family in each scene, Okpa-Iroha seamlessly inhabits a number of different roles alongside the original cast. As bartender, well-wisher, wedding guest and even friend, the Plantation Boy's presence bears witness to the possibilities of diverse casting and the overwhelming whiteness of classic cinema. As the artist himself puts it:

"With The Plantation Boy series, I am looking inwards to explore, conceptually, other forms of representation and identity.  I am my own subject here (in the space of an already available conversation of The Godfather movie), and by engaging the media dynamics of race, I try to look into the sequences of past events (social or historical) and becoming part of an already established or known conversation and actions. The series is multilayered, but its core theme borders on what I will refer to as “the subjective representation of the presence of an omission,” the representation of a deviant culture or race that was not originally there. The whole process creates an illusion. There is also a new dialogue from the simple act of intrusion and new scenes are instigated."

The award-winning multidisciplinary artist lives and works in Nigeria and has had his work on display in Nigeria, New York, Paris and Berlin. Okpa-Iroha, who was born in 1972 (the same year The Godfather was released), adopted photography as a medium of artistic expression in 2005 and plans to carry out his digital wizardry on the remaining films in The Godfather franchise as well as Steven Spielberg's Amistad. Click through the gallery above for a sampling of Uche Okpa-Iroha's photo manipulation in The Plantation Boy.