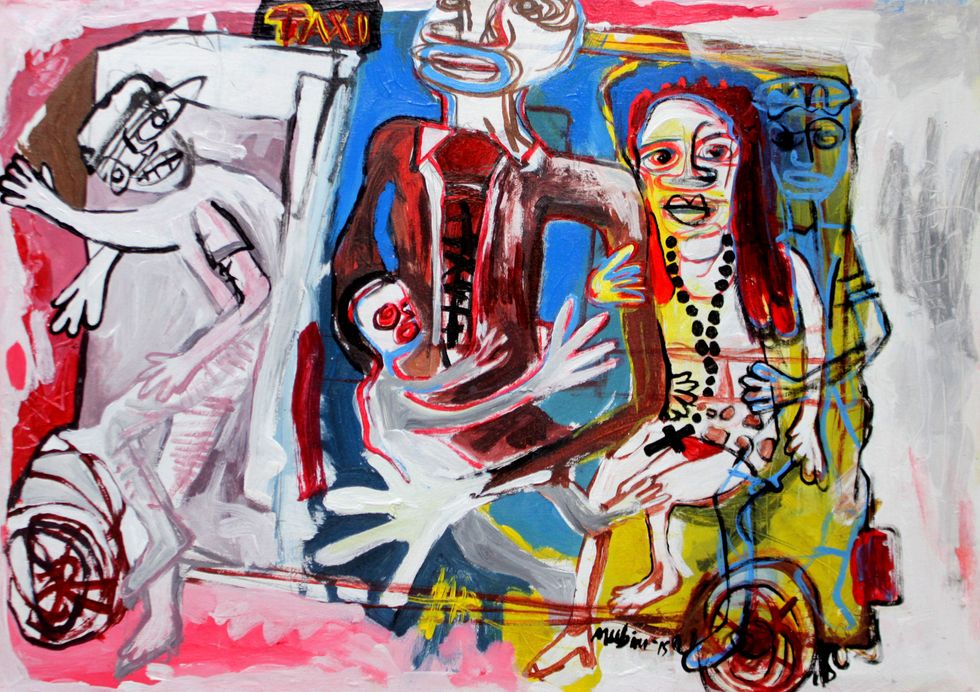 8 Ugandan artists using their work to stand up against political corruption, reproductive justice, and environmental issues.

It’s safe to say that the state of global politics in 2017 have the entire world shook. Between the election of a U.S. President who is trying to whitewash America with his right-wing agenda, to many African presidents holding onto power by any means necessary, we’re all in for a ride.

Artists have always spoken out to bring injustices and social issues to light, and 2017 is no different. Art gives us hope in times of unrest because it’s encouraging to see how people confront complex and everyday issues through their chosen art form.

To close out 2016, I had the pleasure of immersing myself in Uganda’s arts scene, and visited 32 Degrees East Ugandan Arts Trust to learn how emerging and established artists are challenging the status quo.

“When it comes to art on the African continent, people immediately think of artists from Ghana, Nigeria, South Africa, Ethiopia, and Kenya. However, Ugandan artists exist and are exploring contemporary and social issues through their unique lens,” says Teesa Bahana, the director of 32 Degrees East Ugandan Arts Trust.

Get to know eight Ugandan Artists in this list who use their work to stand up against political corruption, reproductive justice, and environmental issues, as well as reflect on the beauty of everyday life, family, and African identity.

Artists with an asterisk (*) by their name are former artists-in-residence at 32 Degrees East Ugandan Arts Trust.

Ugandan-born, Kenya-based documentary and portrait photographer Sarah Waiswa is one to watch. She explores a new African identity in her work while chronicling one’s connection to place. Waiswa prides herself on creating visual poetry in the most organic and creative way possible, and this shines through when you scroll through her mesmerizing Instagram feed.

The self-taught photographer is the recipient of the Uganda Press Photo Award 2015 and the prestigious Rencontres d’ Arles 2016 Discovery Award, which is given out to a photographer whose work has recently been discovered, or deserves to be, for her photography project: “Stranger in a Familiar Land."

She’s currently working with photographer Joel Lukhovi on a long-term project, African Cityzens, where they travel by road throughout Africa exploring the barriers that arise in attempting to access different border points and navigation within the cities themselves. “There is power in Africans telling our own stories,” says Waiswa.

Martha Patricia Wenyisa is an expressionist painter who utilizes symbols in her work to tackle Christianity, history, death, prostitution, and traditional cultures in Uganda. In her piece, “Night Showers,” Wenyisa used her expressionist painting to draw out voyeuristic images and thoughts of Kampala’s after-hours economy, and the effects it has on seemingly anonymous female forms.

Wenyisa has exhibited at the 2015 Degree Show at Ugandan Christian University. Her work has also been exhibited and published as part of Simuda Nyuma (Forward Ever, Backward Never.) No subject is off-limits, and we can’t wait to see what issue Wenyisa’s work will bring to light next.

Papa Shabani is an award-winning Ugandan photographer. His contemporary art practice involves research, intimacy, expression, and communication as a process of documenting life. He works to capture his subjects in their rawest, truest form.

SANDRA SUUBI “King of the Road”*

Sandra Suubi is an eco-artist who turns plastic trash into creative art. The artist’s inspiration is based on the element of possibility, she explains: “When I look at a piece that might seem to have little or no value, I reuse it.” Suubi believes that if these materials stay with us, they must work for us.

In the Kampala Art Festival 2014, Suubi along with her brother Kalule Kagga Enock, built a giant structure which was placed on one of the boda bodas. The piece, “King of the Road,” was made out of reused plastic bottles and old boxes, and paid tribute to the Boda boss men for their contributions to the Ugandan economy. The project also served as a safety campaign encouraging the public to wear helmets on boda bodas.

In Suubi’s ‘Ebiloto’ (Dream) campaign she constructed giant pairs of headphones from recycled plastic bottles, which broadcast music and motivational messages. The project posed the question, “What do you listen to when you’re trying to achieve your dreams?” She expanded this campaign in the Netherlands late 2014 where she created a plastic Dream Lab, which became a space for children to talk about their dreams.

When she's not creating art installations she's performing onstage as an inspirational vocalist. If you’re looking for messages of hope, check out Suubi’s work.

Teddy Nabisenke is a visual artist who addresses social issues such as human trafficking, family planning, and HIV in her work. She has exhibited at LaBa! Arts Festival, Bayimba Festival, and Makerere Arts Gallery.

Her installation “Okutambula Kulaba” (If you’ve ever travelled you’ll have a story to tell) was directed both at the victims of human trafficking and the governments that are indifferent to the realities of it. Nabisenke also dressed two women in sacks and ropes in her fashion series, “Family Planning,” where the sack symbolized children, and the rope represented contraceptives. Nabisenke’s work couldn’t be more timely as women’s reproductive rights around the world are currently under siege.

DAUDI KARUNGI “Man with the Hat”*

Man with the Hat by Daudi Karungi

Daudi Karungi is a mixed-media artist who challenges his audience to question conventional notions of beauty, wealth, and power. Since arriving on the Ugandan art scene in 2001, Karungi has rapidly become one of Kampala’s premiere artists. His work is collected widely by art aficionados around the world and can be found locally hanging in embassies, companies, and five-star hotels around Kampala.

In 2002, Karungi founded Afriart Gallery in Kampala, which is a leading, private art gallery in Uganda focusing on the promotion of contemporary art from Uganda and the East African region, as well as forging collaborations among artists in Africa and beyond. Karungi has been at the forefront of a new movement to promote Ugandan art inside and outside the country. To date, Afriart has showcased over 110 Ugandan artists whose works have also been featured in major international exhibitions, art auctions, Biennales, and art fairs.

DENIS MUBIRU “Can’t Wait to Be”*

Can't Wait to Be by Denis Mubiru

Denis Mubiru is a social commentary visual artist who uses the grotesque to explore the complex yet practical Kampala mini bus taxis, better known locally as “Kamunye.” He uses abstract playful, naïve paintings and imagery to retell the interesting and exciting dramas that unfold within the taxi—petty arguments, flirting and wolokoso (local gossip), which reflect on the society of Kampala and Uganda at large.

Mubiru seeks to draw the viewers’ attention to what social media and the press often ignore through his interpretations of the more intricate aspects of life in the mini buses—the signage, religious symbolism and characters. In June 2016, Mubiru was featured in a main exhibition, “The Unseen” at Kampala’s Afriart Gallery with 10 up-and-coming Ugandan artists. You’ll definitely want a front-seat view when you take in Mubiru’s work.

Ronex Ahimbisibwe is a semi-abstract multimedia artist who is rapidly developing into one of Uganda's most celebrated artists. Ahimbisibwe does not shy away from addressing themes that are controversial in the Ugandan society like homosexuality, nudity, and corruption.

His work has been exhibited in Uganda, Tanzania, Germany, the Netherlands, and Kenya, and is driven by the question, “What if?” Be sure to follow Ahimbisibwe in 2017 to see what’s next.

Jacqueline Lara is president of Mpact PR, LLC. She specializes in helping entrepreneurs and artists share their stories and art with the media and new audiences. She also creates content at Color Wheel Media, and is a contributing arts and culture writer for 99U and i-D Magazine. Connect with her @MpactJacq.