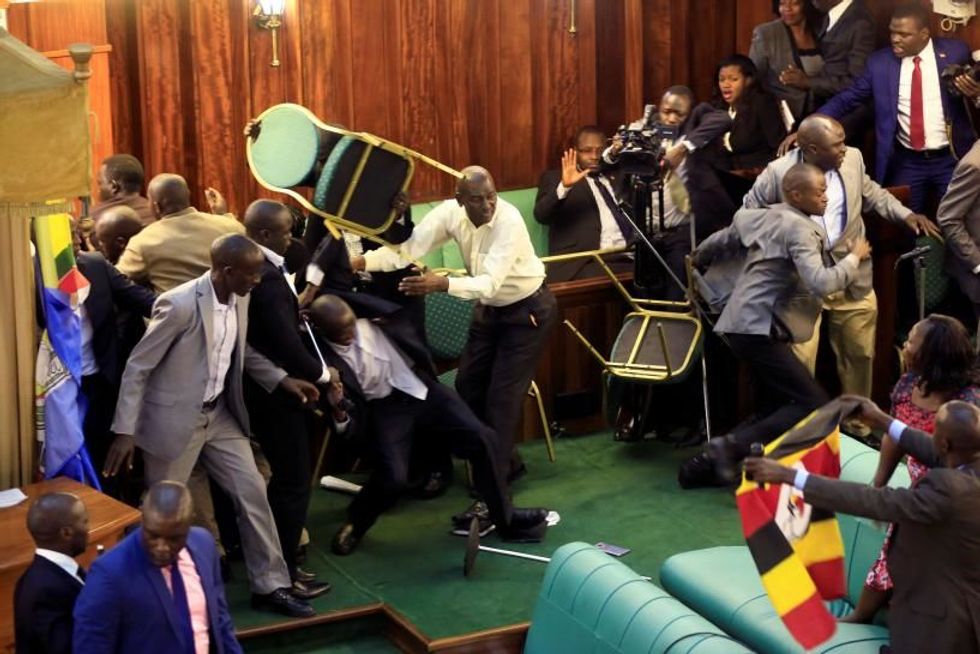 Debates over the presidential age limit in Uganda has led to physical altercations between MPs in the House for two days in a row.

Lawmakers have come to actual blows over a proposed change to the constitution which would allow for the country's long-standing leader, President Yoweri Museveni, to run for re-election after the age of 75.

The argument was so heated that meetings have resulted in flat-out brawls between lawmakers. Video footage of MPs pushing, shoving, kicking and throwing chairs and microphone stands at one another have been circulating on social media. Reutersreports that at least two female MPs were carried out of the chambers after collapsing during Wednesday's hearing, and 25 other members—who were standing in opposition to the proposed extension—were forcibly removed for their involvement in the previous day's scuffles.

Members of Parliament in Uganda threw hands & it was epic. They're debating whether to raise Presidential age limit pic.twitter.com/IzdYSkR3U6

The countries communication regulator banned live broadcasts of the meeting after Tuesday's disruption, but clips of today's session have been shared on Twitter.

The Parliament of Uganda today became a matter of #McGregorVsMayweather.#AgeLimitpic.twitter.com/mx8tEViGRB

The chaotic scenes in #Uganda Parliament moments ago. Mic stands used as weapons via @bamulanzekipic.twitter.com/HTCntORDqV

Parliament communications director Chris Obore told Reuters that the motion to lift the age curb had passed, and that MPs from the ruling party had been given a month to submit a bill for review in the House.

Removing the presidential age barrier in the country, which currently stands at 75, would allow for 73-year-old Museveni to remain in power beyond 2021 when the country's next elections are scheduled. He's been in office since 1986.

The highly contested motion, also referred to as the "life presidency bill," sparked mass protests in the country staring earlier this month. Protestors have been tear gassed during demonstrations and a number of local journalists have been arrested.