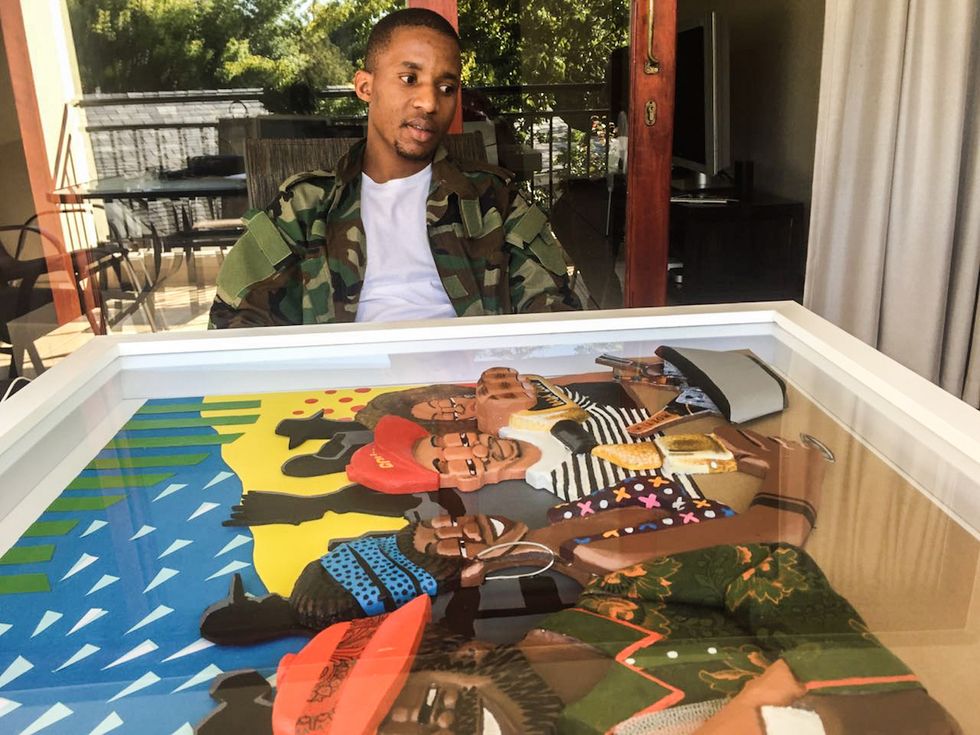 Sanele Xolo and his "Amabhodlela" artwork by Dada Khanyisa.

For South African rapper u_Sanele aka Sanele Xolo, the artwork accompanying his new single is just as important as the music. These days you can spot Xolo hanging around Johannesburg with his new prized possession, a one-of-a-kind painting by a fourth-year Cape Town-based art student by the name of Dada Khanyisa.

Xolo, who moonlights as Okayafrica’s brand manager, is actually in the painting. He’s the one front and center pouring a woman a drink. The piece is a visual portrayal of his new Ganja Beatz-produced song with Mashayabhuqe KaMamba, ”Amabhodlela.” Or at least Khanyisa's interpretation of it.

The two collaborators originally met back in 2011, and towards the end of last year, Xolo commissioned Khanyisa to create the artwork accompanying his latest release. Khanyisa spent the next few weeks listening to the song on repeat. What he pictured was a late afternoon, early evening, in central Johannesburg. Possibly the Maboneng district.

It’s a nice party vibe, the Johannesburg-born artist says of “Amabhodlela,” which, translated in Zulu, simply means “bottles.” The art, which took two months to complete, is what Khanyisa saw the first time he heard the song.

“The track really speaks to the club culture in South Africa,” Xolo tells us. “The whole popping bottles thing.” In the song he talks about his life and his experiences through the eyes of “bottle popping music lovers," which although he’s certainly around, he isn’t quite an adherent of.

For Khanyisa—who prefers to blend gendered pronouns—her artistic interest lies in human emotions. The little things people do. Take for instance Xolo's eyes. He’s pouring the woman on his left a drink while focusing his attention on the woman to his right.

Like much of Khanyisa’s work, the piece has a special three dimensionality to it. It’s a meeting point of sculpture and painting.

Dada Khanyisa. Courtesy of the artist.

When I spoke with Khanyisa over Skype and Xolo by phone, both brought up the notion of collaboration. To see two forces like Xolo and Mashayabhuqe KaMamba come together is a powerful thing, says Khanyisa. It’s a sign of progress in South Africa’s music community. For Xolo, the artwork was the true essence of collaboration. “She took the sound and turned it into a visual expression,” he says.

There’s something distinctly South African about the art, adds Xolo. “What the artwork speaks to me is the local aesthetic,” he says.

The song itself is mostly a blend of Zulu and English, which Xolo says comes across in the artwork as well. “It’s very Zulu, South African,” he says. “I like that when you look at it, it represents home, the aesthetic here.”

Xolo hopes to show the artwork in an exhibition in the near future. Stay tuned.