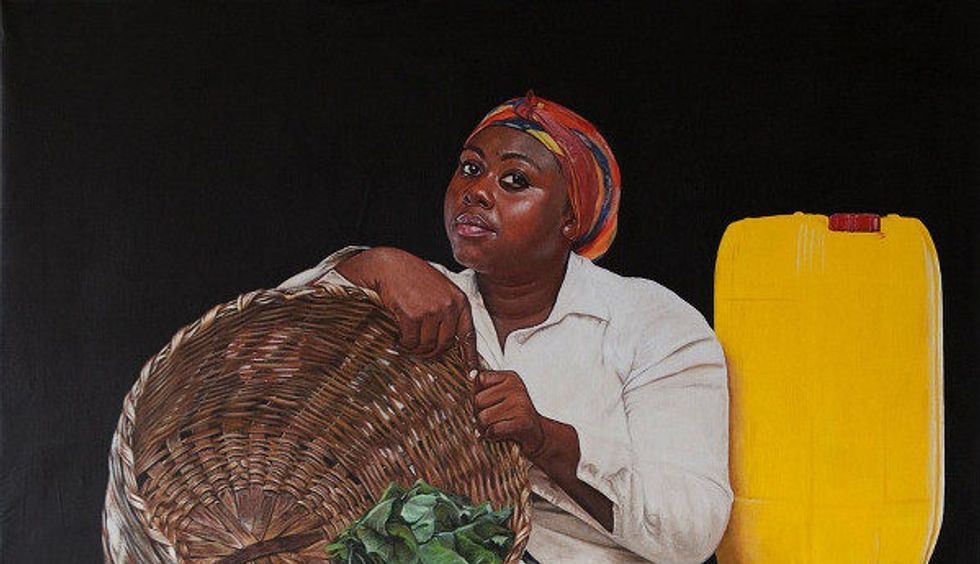 In his studio within his family compound on the outskirts of Accra, Ghanaian artist Jeremiah Quarshie is busy painting portraits for his first solo exhibition at Gallery 1957, a recently opened gallery anchoring Accra’s growing contemporary art scene, in August.

Quarshie’s muses for his latest series Yellow is the Colour of Water are Ghanaian women he sees when he ventures into the capital city. The series name comments on Accra's water shortage as depicted by the everyday yellow, plastic vegetable oil containers doubling as water cans—commonly referred to as Kufuor Gallons—that Ghanaian women routinely use to transport and stockpile water, which is tappable only a few times a week.

“It always looks like African women carry a certain magnitude of strength,” he explains to Blourinartinfo about his decision to center his newest pieces exclusively on women.

He adds that the Kufour Gallons are symbolic of the common thread that bind Ghanaians regardless of social status.

“Whether you’re rich or poor, white or black, a nurse, a centenarian, whatever, the gallons become a symbol, both for failure and also for hope,” Quarshie says. “ The more gallons you have, then you’re sure that you’re OK, you’re safe.”

After capturing the models such as his 95-year-old grandmother, an African beauty-pageant contestant or a friend who he stages and photographs in high resolution sitting majestically atop of the gallon pails, Quarshie intricately transforms their likenesses into breathtaking, hyper-realistic works of art that aim to critique failing political systems, and “the very things that break us apart: nationality, race, culture,” as he tells Blouinartinfo.

Check out Quarshie's latest masterpieces ahead of his solo show, opening at Accra’s Gallery 1957 on August 18 below.

When I don't feel the urge to paint, I start wishing for the lights to go out so I can have an excuse to go out #YellowIsTheColourOfWater #women #gallons #water #market #art #acrylic #painting #Accra #Ghana #Africa

Repost if you love it like I am. . .art by @jeremiahquarshie #art #painting #canvas #acrylic #Accra #Ghana #Africa #grandma #red #water #YellowIsTheColourOfWater