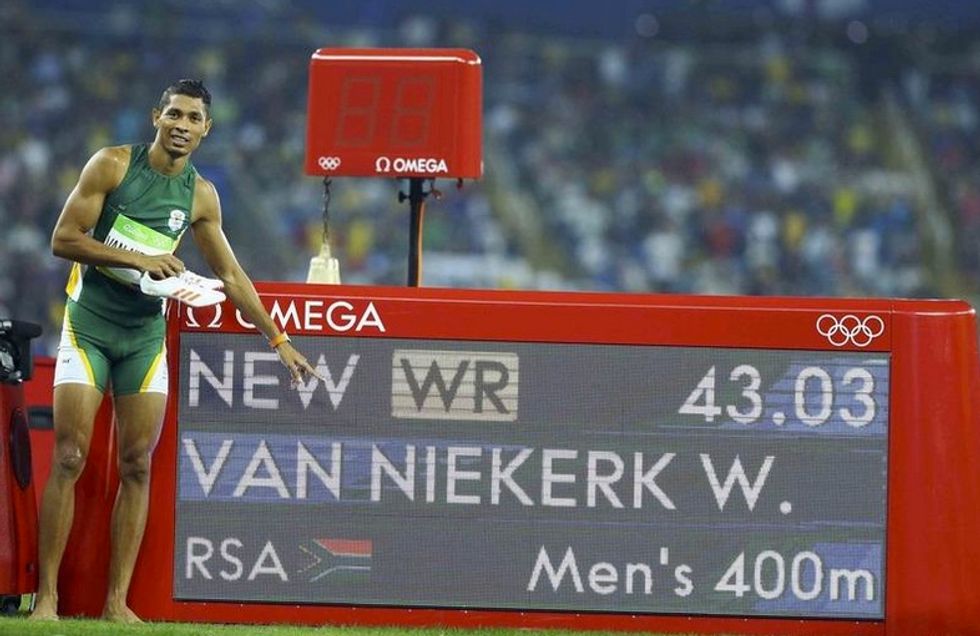 If you haven’t heard, South African sprinter Wayde van Niekerk put on one of the all-time greatest Olympic performances Sunday in Rio. Running from the unlikely outside lane of the men’s 400m event, the 24-year-old from Cape Town took home South Africa’s first gold of the Rio Games and picked up a world record in the process. Clocking in at an unimaginable 43.03-seconds, the 8th-ranked South African outran two former Olympians (it wasn’t even close) and obliterated American track-and-field great Michael Johnson’s 17-year 400m world record by .15 of a second.

“I was running blind all the way,” van Niekerk said after the race. “I thought someone was going to catch me — what’s going on, what’s going on, and it gave me motivation to keep on pushing.”

The race happened early Monday morning in van Niekerk’s home country. Many in South Africa are just waking up to the news. #WaydevanNiekerk, not surprisingly, is currently the top trend on SA Twitter, followed by #mondaymotivation, World Record and Wade. (But let’s be real, van Niekerk is the ultimate Monday motivation)

No doubt you have made the country very proud. Thank you #WaydevanNiekerk pic.twitter.com/wWhfk3JhxC

"How long will it take you to get here"

I have been asking about the scarcity of female coaches. Well done to you too Anne Botha! #WaydevanNiekerk pic.twitter.com/E0XTDJlyVn

#WaydevanNiekerk is coached by his 74yr-old grandmother... THIS is amazing! Listen to your elders, you never know... pic.twitter.com/c4KyIfYB0Q

Other runners might as well become astronauts with all that space that #Wayde left behind #WaydevanNiekerk pic.twitter.com/3o2sxkMeIS

We calling in sick today, this is emergency national holiday #WaydevanNiekerk #Rio2016 pic.twitter.com/tHDQlV09pX

ok so we not talking about @WaydeDreamer twitter banner+how amazing coloured love is? kwaai let me continue to melt pic.twitter.com/MMyaWnj3RM

To see #WaydevanNiekerk fill so many coloured people with pride is awe-inspiring. We have too few heroes & too many villains. Lets change it

It's not often you get to see a young coloured man on top of the world like this. Wayde van Niekerk is an unstoppable hero.

That video of @WaydeDreamer 's run is sooooo powerful!!! God engineering!!! He looks like he's floating in the air!!! Well done papa!!! ??

Just you vs. the clock. @WaydeDreamer you have made my year! #RSA pic.twitter.com/0GRgg73qmA

What a time to be South African! You have done justice to the green and gold @WaydeDreamer @AkaniSimbine pic.twitter.com/8EBtVfqMoR

Can someone please tell me now when the parade will be for Wayde van Niekerk in Azania. I have confetti for days.