Wenger Out: The Pan-African Legacy of Arsenal's Departing Manager 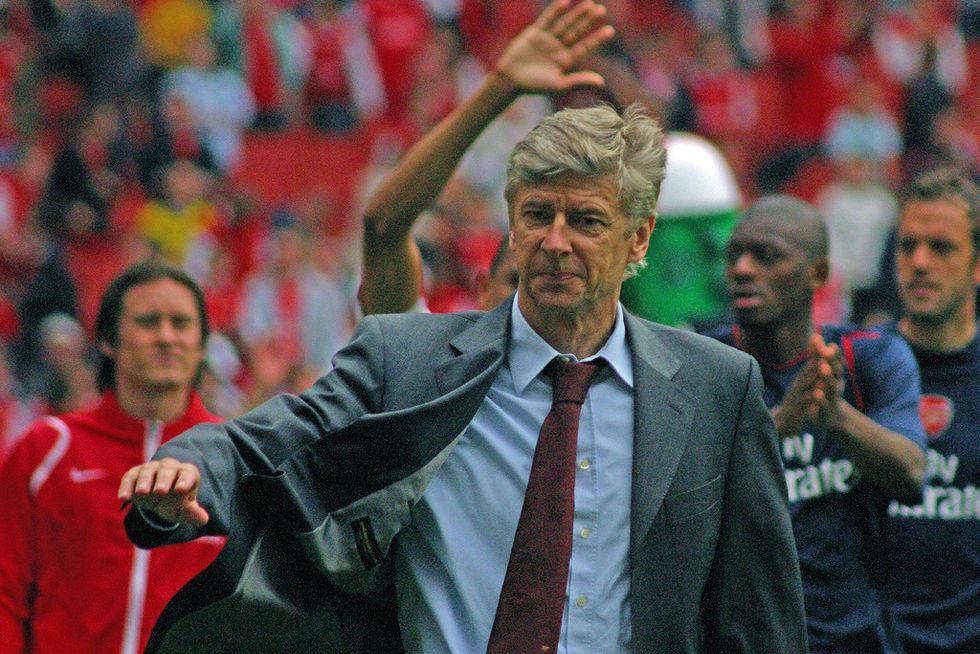 Examining Arsène Wenger's connection to African players and the rise of diversity in European football.

Last week, Arsène Wenger, the long-standing French manager of Arsenal FC, one of the most popular teams in the English Premier League, announced that he would retire after the end of the season.

His decision not only buried the heated #WengerIn/#WengerOut debate that seemingly obsessed every Arsenal fan from London to Nairobi, it also put an end to a storied and celebrated 22-year long relationship with the North London club.

In that span, he managed Arsenal to three league titles (including an oft-celebrated one during an undefeated season) and to seven FA cup crowns. But perhaps his greatest legacy was that of helping to open the English game –– a notoriously inward-looking and traditionalist league –– to the talents of foreign players. And perhaps no other group of footballers benefited more greatly from Wenger's policy of finding talent abroad than African and black Caribbean footballers.

Wenger's managerial strategy could be summed up as: find talent where no one else is looking. And when the Frenchman began his managerial career in the early 1980s in his home country, practically no one in Europe was looking at the talents in the various African countries obsessed with football.

Wenger's mentor relationship with African footballers first came to light in the 1988-1989 French Ligue 1 season, when he was the manager of AS Monaco and signed the then-unknown footballer and current Liberian president George Weah.

Back then, it was extremely rare for African players to become popular in the global game. But for a while, Weah became perhaps its brightest star: in 1995, while playing for Italian side AC Milan, Weah was awarded both the Ballon D'Or, the prize given by the France Football weekly magazine, and the FIFA Player of the Year Award, the prize given by football's governing body to the best football player in the world. He remains the only African player to receive any of these honours.

During the FIFA Player of the Year Award ceremony, Weah called up Wenger to the stage and gave him his medal. Recently, Weah remarked of Wenger: "He was a father figure and regarded me as his son. This was a man, when racism was at its peak, who showed me love. He wanted me to be on the pitch for him every day… Besides God, I think that without Arsène, there was no way I would have made it in Europe."

When Wenger was appointed to be the Arsenal manager in 1996, he was derided as too foreign, as the common sense way of thinking at the time in England was that only British managers could understand the football culture there well enough to win trophies. Similarly, black players –– and not just those coming from Africa –– were seen in the English game as purely athletic types relying on their physicality and no skill to show for in the pitch, and an undisciplined attitude outside of it to match.

In 2012, former Arsenal player Sol Campbell recalled that he had felt uncomfortable playing in the English league before joining Wenger's team from bitter rivals Tottenham Hotspurs: "Maybe they were just used to white faces doing certain things and black faces doing another thing in football. They weren't ready for a black guy doing it ultra proper, and standing up for himself, and saying, 'This is me and I'm coming through.'" According to Campbell, it was expected of black players to be "just having a laugh, skillful, drinking, not great attitude. Not just at Spurs, at other clubs, too, that's what they expected."

So perhaps this adversarial greeting strengthened both Wenger's conviction that talent was important regardless of background or nationality, and his players' loyalty to him and the club. This resulted in the incredible Arsenal teams of the late 1990s and 2000s, and eventually in a change of mentality in english football that opened the door to many African footballers.

But it's not like Wenger set out to build an African or black team. He just happened to look for the best value wherever he could find it. And the African and black players from this celebrated team—which Elliot Ross, the writer behind the popular @Futbolsacountry twitter account describes as a "highly glamorous, swaggering kind of pan-Africanism on the field"—ended up at Arsenal little by little.

Even before he officially was announced at his Arsenal job, Wenger convinced the team to sign up Patrick Vieira, a Dakar-born French international defender. Then, in 1999 came Nwankwo Kanu, a Nigerian forward who would go on to win his second African Player of the Year Award while playing for the Gunners.

That same year, Wenger signed the striker Thierry Henry, another French international, but with Antillean ancestry—his father is from Guadeloupe and his mother from Martinique—who had played under Wenger at Monaco. Also in 1999, local kid Ashley Cole—whose father was from Barbados—debuted in Arsenal's first team.

The next year, the Cameroonian international Laureano Bisan Etamé-Mayer, better known as Lauren, joined the team, right after having won gold at the Sydney Olympics with the Cameroon National Team. In 2001, it was Sol Campbell—a black English player of Jamaican descent—who joined. And in 2002 the Ivorian defender Kolo Touré and the Brazilian Gilberto Silva joined the team.

This selection of black footballers combined with other great players, such as German goalkeeper Jens Lehmann, Dutch wonder Dennis Bergkamp and Frenchman Robert Pirès, to achieve a never yet repeated feat in the 2003-2004 season: winning the English league without losing a game and receiving the nickname "The Invincibles."

Mark Christian has a theory in his essay "Mixing Up the Game: Social and Historical Contours of Black Mixed Heritage Players in British Football" of why the diversity of that Arsenal team was an asset:

Regardless of the fact that racism continues, one cannot underestimate the impact of the influx of foreign players into the game in terms of improving racialised relations. For example, Arsenal FC in the twenty-first century could represent the United Nations as an example of international diversity. The foreign element may have something to do with why black mixed heritage players have gained in performance level and confidence. For example, they may have a feeling of not being the only minority in the team. I am sure, for example, that Ashley Cole, when playing for Arsenal in the early 2000s, must have gained personal confidence playing with the likes of Patrick Vieira, Thierry Henry and Gilberto Silva, knowing that they were also men of black heritage, yet foreign born too.

During Wenger's best years at Arsenal, his players played smartly and cohesively, creating an aesthetically pleasing product through team effort. This helped to dispel the notion that African and black players were not suited for any style of play different from using their physical prowess to overcome their opponents.

And these victories cemented Arsenal as one of Africa's most popular teams (especially in Nigeria, thanks to Kanu), and made many kids across the continent believe that they, too, could one day be playing in the big leagues.

In the face of such success, the people in charge of the English game had to change their hearts and their minds. Perhaps the most telling example is that by 2004, Chelsea—a London team whose fans, as recently as 1982, had chanted "We don't want the n*****" at their club's first-ever black player—signed Ivorian forward Didier Drogba, who eventually became one of the all-time goal scorers for the team and helped them win their only Champions League trophy in 2012.

In his 22-year run, Wenger ended up signing 16 African-born players (including Moroccan Marouane Chamakh and Egyptian Mohamed Elneny from northern Africa) and many more black players. Before Wenger, Arsenal had signed no Africans.

Currently, there are 40 African-born players in the Premier League, including this season's winner of the Professional Footballer's Association Player of the Year Award, Liverpool's Egyptian striker Mohamed Salah. Last year, the award was won by Chelsea's N'golo Kanté. A French international of Malian descent. The year before that it went to Leicester's Riyad Mahrez, an Algerian international.

Next year, there will be no more Arsène in the Premier League but he will remain a revered and divisive figure for generations to come.