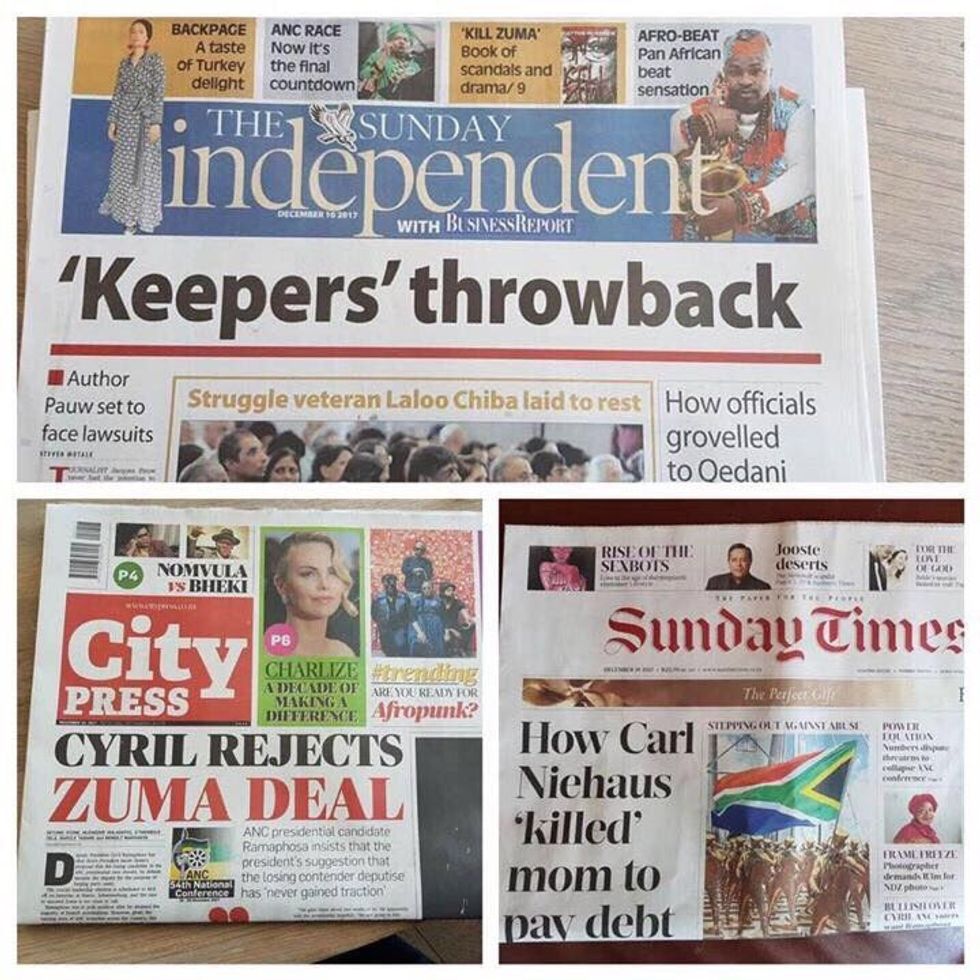 Many on Twitter noted that none of the country's biggest Sunday papers–the City Press, the Sunday Times and the Sunday Independent–had the scandal on the front page last week. This is a far cry from when a black person is in question—President Jacob Zuma, Vice President Cyril Ramaphosa, Atol Gupta, for instance, have all been mainstays of Sunday paper front pages for stories pertaining their corruption. As they should.

But the question a lot of South Africans are asking is if corruption is given less attention and not as widely reported about when the corrupt person is white. And in this case, most headlines don't even include the word "corruption" on their headlines, rather "acounting irregularities."

Many have also been questioning why the country's official opposition party, the Democratic Alliance, has been relatively quiet about the saga. The party is known for making calculations on how much money has been lost to corruption and how it would have helped the poor.

Even though Steinhoff is a private firm, the effect of the corruption revelation has been projected to see members of the Government Employees Pension Fund losing about R12.5-billion in investments.

Through all this, members of the Zuma Must Fall brigade are quiet. White South Africans are the most vocal about corruption in the current regime; when a lot of them supported the apartheid regime—a government many still don't see as corrupt to this day. Hence bullshit campaigns against a white farmer genocide they feel is ongoing.

Below, are tweets from South Africans expressing their dissatisfaction on how the Steinhoff story has been covered.

We really need proper articles from you guys. Something like:

Corruption obviously has only one colour in SA. #Steinhoff#SteinhoffFraud#Steinhoffscandal
— Wesley Fester (@FesterWesley) 7 December 2017

This is Markus Jooste. The man behind corruption and looting at #Steinhoff. The face behind white capital corruption. Let's share because white media will not show you his face because he is a white man. pic.twitter.com/Ii3WjKxM4E
— Black Opinion (@BlackOpinion2) 6 December 2017

#Steinhoff when its blacks its corruption, when its whites its accounting irregularities. Welcome to Mandela untransformed country
— ncedisa mpemnyama (@ncedisa_m) 6 December 2017

#Steinhoff when its blacks its corruption, when its whites its accounting irregularities. Welcome to Mandela untransformed country
— ncedisa mpemnyama (@ncedisa_m) 6 December 2017

The RAND is not even bothered about #Steinhoff accounting FRAUD and CORRUPTION. No warnings, no tremor, even people who always say they've had enough of corruption and moving to Australia are typically silent for their "SaveSA" initiatives. pic.twitter.com/Wx1wbPHuBy
— Sweet_T (@Tsietsi_Mohale) 6 December 2017

Accounting irregularity for who? To who? A thief is a thief, stealing is stealing. These are thieves, get over yourselves. #Steinhoffpic.twitter.com/hPY27OJEj5
— Man's Not Barry Roux (@AdvBarryRoux) 7 December 2017

I'm no fan of Jacob #Zuma & all he stands for & all who stands for him but the #SteinhoffFraud is huge. Bigger than the #Nkandla scandal & it's not financial irregularities. It's corruption of White Monopoly Capital @SakinaKamwendo
— Jabulani Nzilane (@JabulaniNzilane) 10 December 2017