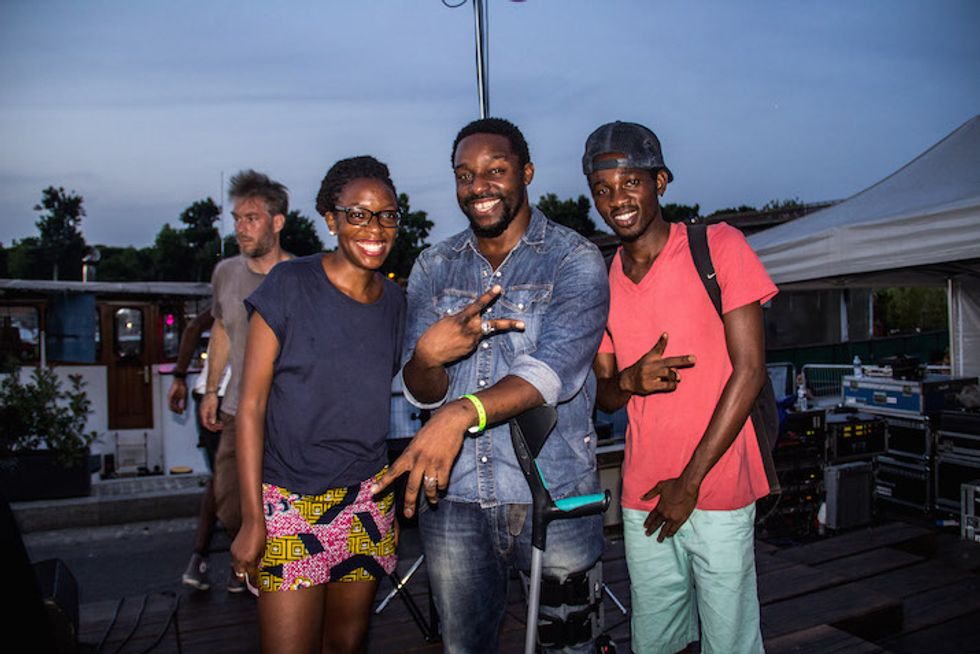 It goes without saying that hip-hop today has an influence around the globe and, with a number of prominent artists, Ghana is steadily legitimising its voice in the culture. A collective of young creatives who go by the name Yoyo Tinz have made it their mission to help export the Ghanaian hip-hop culture abroad, as well as document this growing scene. Okayafrica contributor Jacob Roberts-Mensah caught up with Yoyo Tinz photographer and founder Selorm Jay, writer Moshood, and co-director Esse'Madam Yo-Yo Tinz,' via email to get the run down on the group and their latest trip to Paris Hip Hop 2015.

Jacob Roberts-Mensah for Okayafrica: Tell us about the name YoYoTinz?

Yoyo Tinz: How the name Yoyo Tinz came up, you know this thing of rappers uttering these "yo, yo, yo" ad libs as a sort of precursors to spitting their bars? That's where the term "yoyo" came from. Back then, the "yo, yo" was all our parents heard; perhaps because of the accent, or perhaps because of the fact that they were totally uninterested in what a rapper had to say after saying a dozen "yo yo's," and so chose to only hear "yoyo."

Overtime, anything “hip-hop” came to be described as "yoyo"; you walked with a swagger and you were yoyo. (If) You dressed in the stereotypical hip-hop way (then) you were yoyo etc. So when we say Yoyo Tinz, it's literally saying "hip-hop things." Also, adopting yoyo is a way of embracing our own Ghanaian term for hip-hop and also showing which/whose hip-hop we're focused on: Ghana(ian). But we have the ambition to involve hip-hop from other African countries.

OKA: How would you describe Yoyo Tinz?

YT: Yoyo Tinz is a group of young cosmopolitan and dynamic people who share the love of hip-hop and aim to promote, develop and archive the Ghanaian hip-hop culture. The idea is to create a unique space for Ghanaian hip-hop in all its diversity and on various mediums. Yoyo Tinz wishes to be a source of information about Ghanaian hip-hop through documentaries, interviews, photographs, articles, TV shows, events, clothing and much more. We would like to show the world that Ghanaian artists have developed their own hip-hop culture. We can't really mention all the members but most in the group are in through the request of volunteers/interns and also just appreciation of what we do and wanting to help. We are also a non-profit so we all hustle somewhere to eat whilst doing Yoyo Tinz.

OKA: What is your take on Ghanaian hip-hop right now?

YT: Hip-hop in Ghana is in its teenage stage which is exciting because it is a time where artists dare to try new things. The culture is also asking so many questions and uncertain about it choice of path. But we still notice that there's the issue of inaccuracy pertaining to hip-hop in Ghana: it's often reduced to just the rap aspect of it. So there's this huge amount of work that needs to be done to rectify this and make our people realise that hip-hop is a culture that goes beyond just rap. We need to make other elements visible and common, too and that is what our mission is right now.

YT: One of our favourite rap song right now is Blitz The Ambassador's "Shine," because it's borderline dopeness - sonically and visually. Also because we totally dig what he's trying to do with the Diasporadical Trilogy, of which "Shine" is the second part.

We could also mention “Chale We Dey” by C-Real featuring Wanlov. Besides the dope beat, the song tackles some current issues, and the day-to-day wahala we can experience in Accra.

OKA: The creative community within Ghana seems to be developing quite nicely, what would you say is one of if not the most creative thing coming out of the nation right now?

YT: Ghana is boiling with hundreds of creative initiatives these days, so it is very difficult to pick one. But from afar, Chale Wote Street Art festival is the biggest platform for creative arts. This 2 day-festival was created 4 years ago by Accra Dot Alt. It happens in Jamestown every year and is totally free. It is the only time of the year and the only place where you can see such a big display of various artforms: music, paintings, sculptures, dance, cinema, theatre, etc.

OKA: And what do you think Ghana could do for the young creatives right now?

YT: There's so much Ghana could do for young creatives right now. One thing that could be done is the provision of spaces for the production, performance and exhibition of the works of artistes. These spaces should come at prices that are reasonable and affordable to the artistes — most of whom currently do not make much from their art.

That brings us to the problem of finance. Ghana could also provide financial assistance to creatives for progressive projects, financial assistance to creatives who want to embark of cultural exchange programmes and the like, as the state will, in the long run, benefit from all of these. There's something really off and wrong to have most of our creative and cultural productions funded or assisted in one way or the other, by non-Ghanaian institutions.

Lastly, but definitely not the least, a proper and efficient royalty collection system could and should be put in place to make it possible for our artistes to eat off of their work. Especially, in an industry where album sales are underwhelmingly low, and where artistes need to rely on shows and brand ambassadorship to earn a living.

YT: Creatives do have huge roles to play in every society. Creatives are cultural workers and cultural work is very essential to the ultimate development of every society. For instance, everyone listens to some music, everyone is exposed to some form of art. This is where creatives come in to create some sort of awareness and consciousness in citizens by infusing all of these social information into their creations. All of the awareness and consciousness that ends up being created as a result of the “conscientisation” could be harnessed for and used in various ways for the development of our society.

The impact creatives like ourselves have (as YoYo Tinz) is shifting the stereotyped conceptions our people in general have about hip-hop as some “uncultured and inconsequential thing.” People need to see it as what it really is; a tool for education, information, entertainment and ultimately development of self and society, at large. And it is this impact we seek to make by the type of hip-hop content/activities we promote/showcase. Ghana is quite absent from the international scene, creative people could be great ambassadors of the great and rich Ghanaian culture.

OKA: Tell us about your journey to the Paris Hip-Hop festival

YT: Paris was dope! As a hip-hop organisation looking at developing the hip-hop culture here, we wanted to experience how other have developed into festivals, see what we could learn and bring back as inspiration to be able to organise our hip-hop festival which best fits our society.

OKA: How did you first hear about it?

YT: We made the move ourselves, we went online checked a number of festivals happening at the times favourable to us and we contacted the organisers. We were really interested in Festa 2h in Dakar Senegal, and Paris Hip-Hop in France.

OKA: You guys also had to raise funds for this trip let us in on that whole part of the process.

YT: We contacted companies and institutions to get sponsorship and started a crowd funding campaign. We couldn’t get flight sponsorship to Dakar and strangely and shamefully flying to Senegal is more expensive than to go to Paris. We thank KLM Ghana for sponsoring us with those free tickets and all the people would donated money. If Yoyo Tinz is able to make something good for Ghana out of this experience, unfortunately it is not by the helping hand of our nation but thanks to KLM, friends, family and private organisations like Accradotalt.

OKA: What is the most important thing you have learnt on your trip to France?

YT:Hip-Hop Citoyens, the organisation who created the festival has always been supported by the government and public institutions. Besides, hip-hop is known, respected and recognised in the public sphere. Many examples can confirm it: kids learn hip-hop dance in schools, it has been included as extracurricular activity; one of the former minister of culture took part in some events; some mayor offices organised events as part of the festival, etc. This means if we work hard, we can also develop hip-hop in Ghana and make people understand that hip-hop culture can have a role in education and a social impact.

OKA: And the best part of the whole experience for you guys?

YT: We were lucky enough to have access to the biggest exhibition dedicated to Hip-Hop in France. We were also amazed by the “face au mur” graffiti exhibition. The walls of a 500 square meter room in a military base have been totally recovered by graffiti. Finally, the conference dedicated to hip-hop dance in schools was a great moment. During the battle session, we were overwhelmed by the kids’ talents and energy.

YT: The whole idea of the trip was to learn, get contacts, get inspiration in order to organise our very own Yoyo Tinz Hip-Hop festival in 2017. For now, we are still working on archiving, promoting and documenting everything Hip-Hop in Ghana. We will also have our own station with Hip-Hop related activities at Chale Wote on the 22nd and 23rd August 2015.