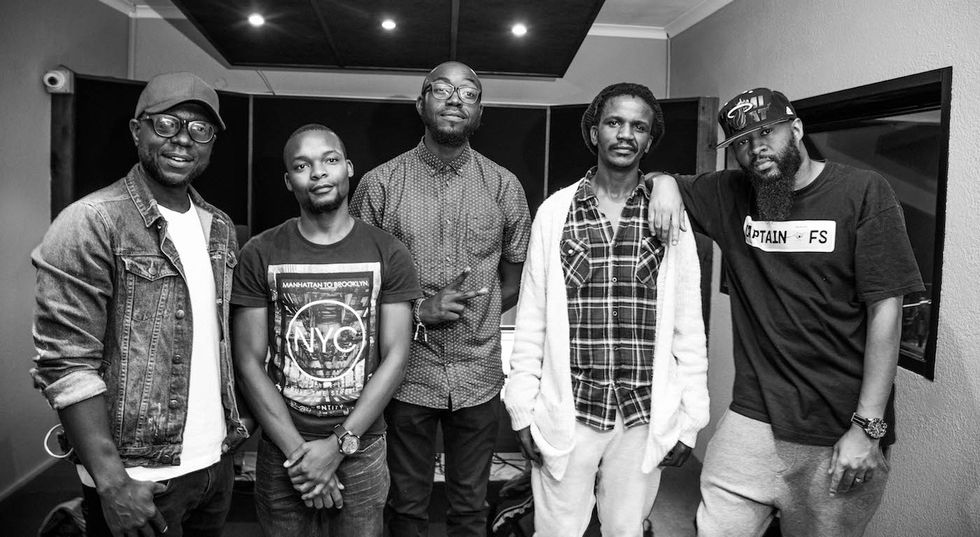 We talk to South African hip-hop artists The Assembly and Zubz about their new collaborative EP, Podcast.

"I don't need to record another song for the rest of my life," says veteran South African rapper Zubz. "So every time I record a song, it's because something has moved me, and made me wanna do it."

So, him working on a 3-track EP with the trio The Assembly—made up of Melly Mel, Captain and Lebo Mochudi—was one of those cases where he was moved. "These dudes, you can tell from their vibe and energy, hip-hop is who they are, not just something they do. It runs in their blood. They make music," he says.

The recently released EP, titled Podcast, opens with "I Will Rise," an uplifting song in which Melly Mel, one third of The Assembly, raps:

"Me and positive, I conquer on a daily/ And actually, my mood is responsible for many/ so I stay sharp and woke, and I'm alive in the building/ Positive, recognize how we living"

The hook, sung by Eva Morgan reminds me of church. It's big and fills your earlobes, just like the music that accompanies it. "I Will Rise" sets the tone for the rest of Podcast.

The song "Good Day" offers a pure and positive outlook on life, which I haven't heard in hip-hop in a while (trap, bro).

"No greater gift than a day that's just begun/ I take a breath this air fills up my lungs/ Healthy, happy, alive, that's a beautiful day underneath these African skies/ Every moment a blessing, none of them passing me by"

Podcast reveals rappers who are comfortable with who they are as human beings and as artists. The EP, which seems to have positivity and optimism as the underlying theme, was a product of spontaneity.

The subject matter came naturally. It's a true reflection of the men's collective mind state. When I give them my take of the album, they all pause for a second and recall their lyrics before they agree with me.

"We didn't even know what we were doing when we stepped in there," says Melly Mel. "We just knew we wanted to be around each other, and we just knew this was the music that felt right to do, what we had in our hearts and minds in that space of time. If you take a look at it, you won't find any of this kind of music in any of our solo projects. It just came together like this in project. This project is where you get the same people you know, doing something uncomfortable musically."

Zubz adds that the plan was to not have a brief. "So we all met in the studio and we pressed play," he says. "Instro, the engineer, was hearing [the beats] for the first time. We were hearing them for the first time. Whatever hits you, you speak. Like, 'oh this sounds like a nice day, waking up in the morning like it's gonna be a good day,' and then we would be like 'oh that's the name of the song.' Then verses get laced in the booth and we are done."

The project's title came during a recording session. "It started with an idea that Melly had," Lebo says. "We were having a recording session and then he was like 'yo I've got this idea.' He draws a sketch on a napkin, it was of these pods headed towards earth. He's like 'imagine if we could use this for something as some sort of artwork.' Then we developed it, and when we started working with Zubz, he mentioned that he had a podcast coming out, I was like 'oh shit, podcast, we are casting pods.'"

Sonically, Podcast boasts airy pads, warm bass lines, trumpets and electric guitars—as the cliché goes, it's a musical project. Thapelo Mashiane, who's the youngest in the room, produced all the beats on Podcast.

"I gave them a catalog, knowing their sounds," he says. "Surprisingly, they chose the three least suspected beats. I was shocked when they told me which ones they had picked. And then I went back and asked them, 'did you guys hear this beat?' But what they did with it blew me away. I don't think anybody else would have done what they did."

"And in terms of what's out there," says Captain, "this project is different."

When The Assembly released their debut EP Inspection in 2015, they introduced themselves as an unashamedly boom-bap-centric trio. Some of their song came with DJ scratches, with production by the likes of Mananz, All Spark, Nyambz, and Melly Mel, among others.

Boom-bap is now a niche within hip-hop with other sub-genres like trap taking the forefront. The fellas aren't perturbed by that. It's all about making what comes naturally for them.

"As long as I'm doing something that feels good with me," says Captain, "why would I go out and try something that I know for a fact will be chewed once or twice and spat, this is the take-away era, nothing has replay value anymore. Why would I want the moment?"

Podcast is indeed the type of music that stays with you for multiple listens. Listen to Podcast below and download it from iTunes, Google Play and Amazon.