1 Future Presents 'Not Yet Free' Brings Visual Art, Music and Media to NYC for Youth Day 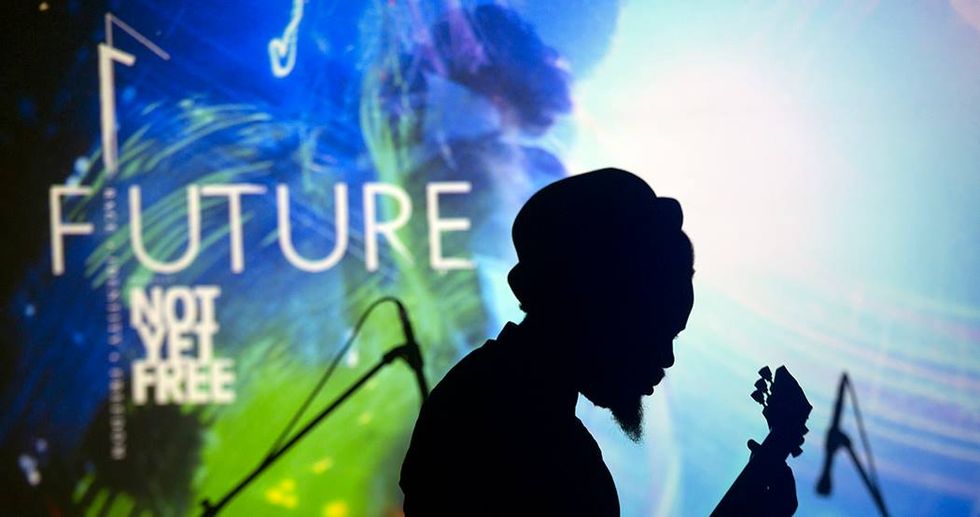 1 Future Presents: "Not Yet Free" will be NYC tonight commemorating the 40th anniversary of the uprising Soweto for Youth Day.

It’s a quarter to 5 on the opening day of  Keeping Dreams at the SoMA Art + Space in Johannesburg’s Maboneng Arts District and the 1 Future presents “Not Yet Free” visual art team is busy doing last-minute installations of Cannon Hersey and Samson Mnisi’s abstract musings on freedom and liberation. Other crew members are setting up video projectors of work made during the group’s month-long residency together in Johannesburg this April and May, including footage from storytelling workshops where an international group of young artists and students muse on freedom in post-apartheid South Africa, justice in America during the age of mass incarceration and make art inspired by finding freedom in the abstract.

The documentary crew is diligently filming the bustle, while the social media team gives followers a glimpse of what they’ll get later in the night. Meanwhile across town at the historic, Downtown Studios, the Not Yet Free house band, led by the sultry, Jessica 'Anjelica' Vox and made up of band members from the U.S. and South Africa, finish recording their first studio album before swinging by the gallery to support the rest of the team.

This is just a taste of the kind of programming the organizers of 1 Future presents Not Yet Free hopes to continue internationally. 1 Future’s global collective of diverse visual artists, musicians, filmmakers and activists create social progress through art, music, filmmaking, large-scale projections, interactive media workshops, dialogues and events.

Led by Cannon Hersey, fine artist and organizer, Taku Nishimae, award-winning filmmaker and activist and Samson Mnisi, South African fine artist and community leader, 1 Future presents “Not Yet Free” is unlike any other program in the world. South Africa’s legendary singer, activist and 'Mam D' Dorothy Masuka was one of the first to join this project.

The organizers reached out the revolutionary musician because of their deep respect for her contributions to South Africa’s freedom movement. She came to the table because of her lifelong commitment to human rights and recognition that this project is something more than a half-baked humanitarian arts project and really about giving local communities and talent the chance to express themselves with big impact.

Mam D’s belief in the project contributed 1 Future counting some of South Africa’s best artists, curators, musicians and more to their community of partners including: The Brother Moves On, Joburg's Zama Phakathi, a young curator with a television show, Zama’s Art Gallery and 2015 Okayafrica Woman to Watch, Soloman Moremong, an award-winning fine artist and Dumisani Phakathi, a television producer, director and documentary filmmaker for SABC. These artists are just a few that share 1 Future’s special mix of belief in the youthful optimism of art and recognition of the hard brutality that much of the globe experiences due to oppression. They come together as a ragtag group of artists and activists bent on collaborating and  celebrating  and creating a safer, freer world.

Meant to be flexible and replaceable in any hood in the world, the organizers travel to across borders and boundaries and tell the stories of those living in the shadows seeking freedom from societal constraints. In July, they’ll take a group of South Africans and Americans to Hiroshima and Nagasaki to collaborate with Japanese artists on art that inspires peace and calls for a non-nuclear war.

Just before that, they’ll be NYC tonight commemorating the 40th anniversary of the uprising Soweto for Youth Day from 7:00 to 9:00 p.m., at Anita’s Way. The event will feature projections of art and video from 1 Future presents "Not Yet Free"  in Johannesburg and will feature projections of some of South Africa's iconic performers including, Dorothy Masuka, BLK JCKS, Boom Shaka, Thandiswa Mazwai, Martin Machapa and TIDAL WAVES and the art and projections of Samson Mnisi and Cannon Hersey.

Look out for a live performance from Jessica 'Anjelica' Vox and a dance performance by Daniel Soto, original dance captain of award-winning, Broadway show, Fela.