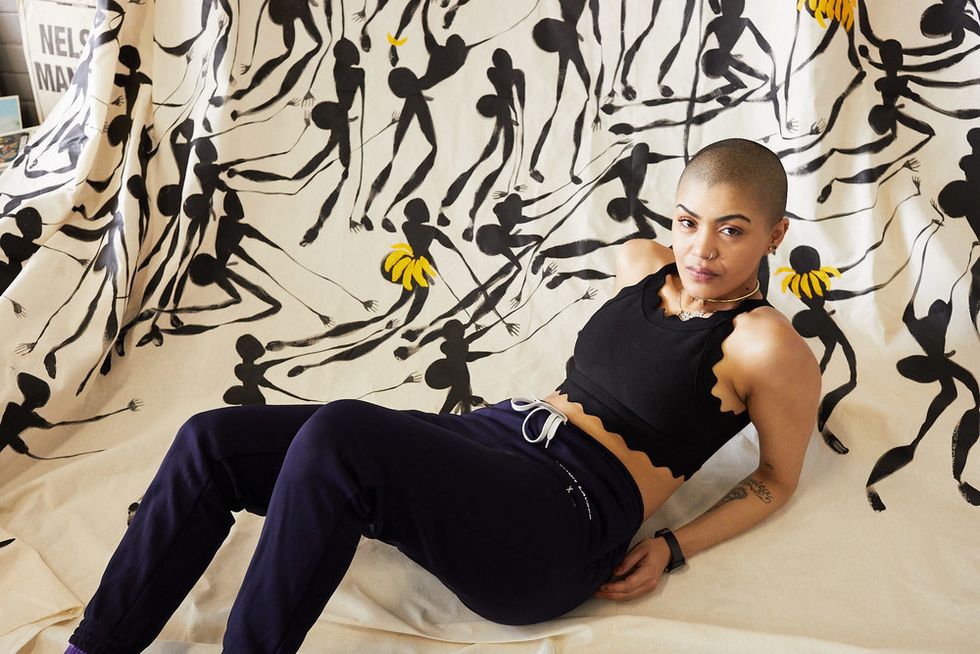 Her paintings of fruit symbolize the balance between fragility, power and human sexuality.

2018 OkayAfrica 100 Women honoree Lady Skollie will answer any question you have on topics considered taboo–from sex to rape, and feminism to sexuality. You'd just better prepare yourself for her answer.

The 30-year-old artist, who was born in Cape Town as Laura Windvogel, uses her art to expose unanswered sex crimes in her native South Africa. Having publicly called out several high profile men accused of rape, including former president Jacob Zuma, Lady Skollie is an indisputable voice against gender-based sexual violence.

In South Africa, the word "skollie" translates closely to "a person who is a scoundrel". The addition of "Lady" is the artist's reclamation of that term used often to assail women and people of color. Her pseudonym is not a mask; her message would be the same if she worked under her given name. Rather, her chosen title is reflective of the way she adopts contradictions for her own use. Within her artwork's evocative imagery of papayas, vaginas, bananas and penises, are cheeky metaphors whose humor is belied by the gravity of their symbolism; they allude to rape and consent.

"Kind of, sort of united we stand: the ups and downs of competitive sisterhood," 2016.Image copyright Lady Skollie, courtesy of Tyburn Gallery.

Her paintings of fruit symbolize the balance between fragility, power and human sexuality. The imagery, appealing at first observation, ultimately delivers a bite. Lady Skollie explains her layered approach: "Everyone loves to be entertained and not preached at… I think sometimes I don't only wrap provocative elements in sweetness but also the rot. No one wants to look at rot but once it has a layer of sweet we try to ignore that stench of violence." The artist incorporates drawings of Khoisan women into her canvases as another clue to her own cultural identity. The women are often shown in dominant positions, such as the Khoisan Kween from her 2017 exhibitionLust Politics at Tyburn Gallery in London. Occupying an entire wall of the gallery, the 'Kween' greeted visitors with a golden halo and legs spread defiantly; perhaps a juxtaposition of women's sexuality levied against their expected piety.

It is tempting to label Lady Skollie's outspokenness as the work of an activist. However she dismisses that label, stating, "I am not an activist. I am an artist. The fact that much of my work is about gender violence is just a symptom of my surroundings, not a decision to be an activist… It's a word everyone adds to their bios after one viral tweet. I think the word and its use has become vague and gratuitous." The activist label was applied after she questioned South Africa's hip-hop community for its support of fellow rapper Okmalumkoolkat, who had served jail time for sexual misconduct. She challenged his public apology as insincere and a diluted effort to salvage his own reputation with little regard for his victim.

As disturbed as Lady Skollie is over the idea of activism as her artistic motivation, she is even more disturbed by "how normal transgressions against women have become." It is why her work immortalizes the offenses that women are taught often to dismiss. Skollie stands out in how she challenges the implied cultural doctrines of women's submission within African culture. With ease and potency she weaves innuendos in her work. And with the same confidence in delivery, she talks openly on sexuality and womanhood–topics that too many Africans shun in public conversation.

Her assail on sex inequalities often draws criticism, which is far from surprising in male-dominated societies, but her response is an emphatic dismissal: "My block hand is very strong after receiving death threats and things, being called a lesbian as a diss [sic], rape threats for making work about bananas and papayas. Living in South Africa means that views on sex and sexuality, especially where women are concerned, is very conservative and unchanging."While the country has recently experienced change in political regime, the ideology that tolerates rape culture is yet to be addressed. "The same foot soldiers of the patriarchy are in charge; stop seeking political guidance for the emancipation of women," her refreshing and undiluted feminine voice demands, speaking to the fact that oppressors seldom overturn laws to elevate the oppressed without social and political upheaval. "South Africa has proved women are not on the top of any agenda," she adds. Her charge to young South African women who want to see change is to organize: "The levels of power women gain access to when we formalize our time together is astounding."

In addition to the visuals she presents, the titles of her work also contribute to her feminist output. They often reference actual news stories in South Africa, especially those in which women are the victims. One painting, titled, Octavia and Cleo found with heads buried in the sand so unfortunately they can't see you all begging for forgiveness, is inspired by a mother and daughter who were murdered and whose heads were buried but bodies left on display above ground. The names of the figures, by coincidence, share the same name as characters from a play by William Shakespeare. To the question of a potential link, she remarks sharply, "No, it is not in any way inspired by an old white dead man's work."

Lady Skollie says the key takeaway from her work should be that women have a choice and are resilient. "Violence is normalized and we have become numb to the everyday occurrence of hate. Until we are in a safer place I will continue to make work." You can imagine that for an artist as in charge as Lady Skollie, there are few dull moments. When asked about her upcoming projects having just returned from Cape Town Art Fair in February this year, she replies only, "keep watching." Considering Lady Skollie's conscious art and passionate output, remaining in anticipation of her next move will be an easy thing to do.