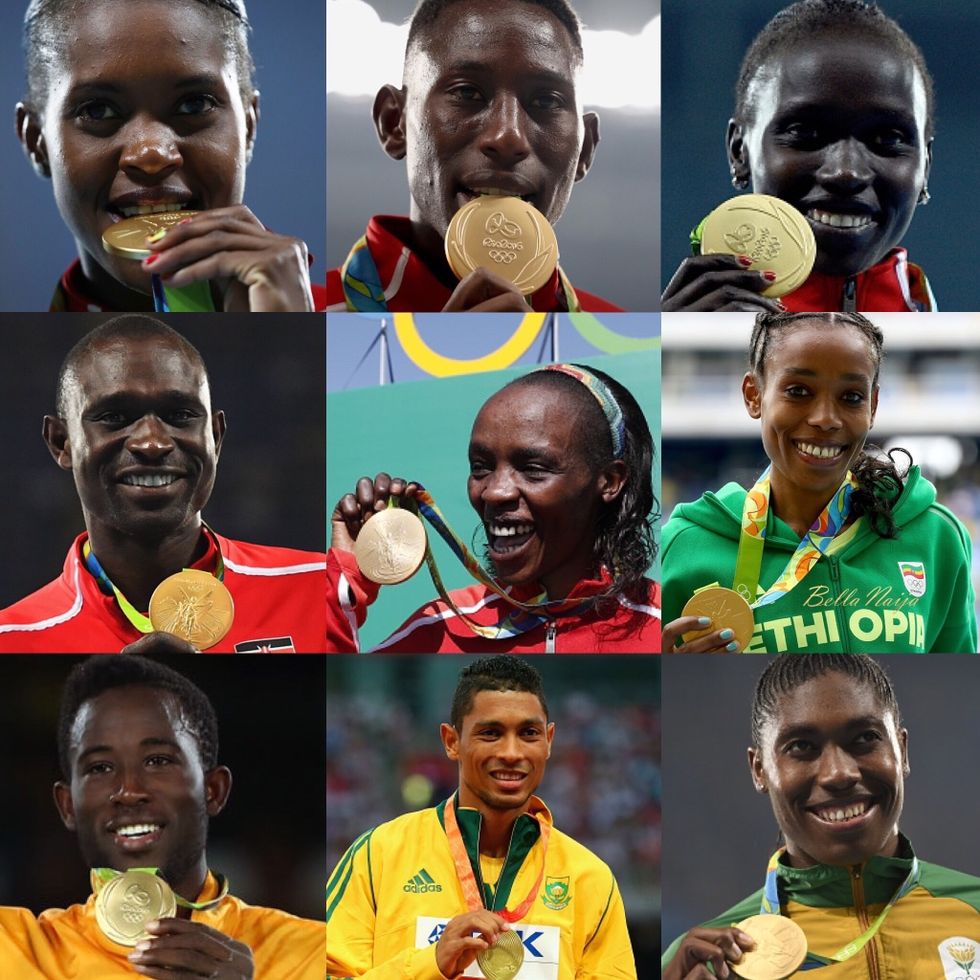 African athletes thrilled and inspired us during the Rio 2016 games. We look back at our 20 favorite moments of the summer Olympics.

It’s no exaggeration when we say that African athletes kicked ass in Rio—just see the Judo results. But African Olympians also took part in and won gold in all kinds of sports from running and fencing to swimming. In fact, we think Rio 2016 will be remembered for the incredible history-making performances by many of our favorite athletes

Below, we look back at 20 best moments for African athletes at the 2016 Summer Games.

Julius Yego, Kenya’s Youtube-self-taught javelin thrower and two-time world champion, picked up a silver medal despite suffering a campaign-ending injury during his second throw in the final at the Rio games.

He’s the first Kenyan to win a medal at the Olympics, an excellent follow-up to his historic appearance in London as the first African to compete in the javelin-throwing men’s final.

It looked like 1500 meter favorite and 2015 world record holder Genzebe Dibaba of Ethiopia was poised to hold off the competition, until Kenyan runner Faith Chepng’etich Kipyegon surged ahead of her on the final lap, capturing the third gold medal for Kenya.

Kipyegon, who dedicated her gold medal to her boyfriend, had this to say after pulling off an epic upset: “I didn’t believe I could win but I thank God for helping me to win here in Rio. It’s my first Olympics and I’m so excited.”

No Olympian wants to realize s/he is on the verge of defeat. And that’s the vulnerable position Cheick Sallah Cisse of Côte d’Ivoire found himself in with seconds winding down on the clock as he squared off against Britain’s Lutalo Muhammad in the men’s Taekwondo 80kg division. That’s when Cisse kicked things into high gear, literally, delivering a reverse-turning kick to the head of Lutalo that won him the final. The 22-year-old Ivorian pulled off an unimaginable upset over his British rival, 8 to 6, and snagged the first gold medal for Côte d’Ivoire, and third Olympic medal overall. He’s joined by compatriot Ruth Gbagbi who is bringing home a bronze medal from the women’s under 67kg Taekwondo bout.

Ethiopia’s 24-year-old distance runner Almaz Ayana blitzed past the world record held since 1993 in the 10,000 meter race. She surpassed the record by more than 14 seconds. What makes Ayana’s gold-medal-winning feat even more amazing? It was only her second time running that particular race. Big up!

Almaz Ayana of ETHIOPIA beat World Record in the 10,000m by 14 SECONDS. That girl behind her? She has another lap! pic.twitter.com/ldNtu2oTmp

After suffering a devastating defeat against Germany amplified by financial woes, which has extended the two-decade long gold medal drought since the 1996 Atlanta games—Nigeria’s U-23 team battled back to defeat Honduras 3 to 2, scoring a bronze medal on Saturday.

A couple hours after their victory, the team’s Japanese benefactor Katsuya Takasu arrived as promised to personally offer his congratulations and hand over two checks totaling $390,000 to coach Samson Siasia and captain Mikel Obi. Obi,  who at one point had to shell out $4,000 to bail out his team after being held at a Sao Paulo hotel over unpaid bills, has generously offered to donate his share to his teammates.

"The $200,000 covers the bonuses and allowances as promised and the $190,000 is for the bronze medal," Takasu tells BBC Sports. "I had travelled from Tokyo prepared to reward them anyway, and to watch them win the bronze inside the stadium was very fulfilling.”

Already the world record holder, Kenya’s David Rudisha became the first male athlete to win gold in back-to-back appearances at the Olympics since New Zealands’ Peter Snell did it at the 1964 games. Rudisha had to overcome an injury that required surgery after his success at the London games in 2012, which most likely makes his triumph even sweeter.

“It is great to win my second gold. It’s so great. I am so excited. It is the greatest moment of my career,” Rudisha says.

Kenyan marathoners brought home silver medals in previous appearances at the summer games in 2004, 2008 and 2012. In Rio 2016, they finally hit gold.

Jemima Sumgong was the athlete to do it, also becoming the first Kenyan woman to win a gold medal in a marathon. Favored to win, Sumgong pulled away from her competition in the final two miles of the 26.2 mile race.

“I was never worried that I’d lose this,” an ecstatic Sumgong says. “At 40 kilometers, I knew the gold was mine.”

Sometimes just showing up to the Olympics is a big friggin’ deal. Sierre Leone’s 18-year-old Bunturabie Jalloh, who carried her country’s flag during the opening ceremony in Rio, had the opportunity to write her name into history books as the first woman from the West African nation to compete in swimming at the Olympics.

Tunisian fencer Ines Boubakri became the first African woman to medal at the Olympics in the sport. Boubakri prevailed over Russia’s Aida Shanaeva to secure a bronze medal in the individual third-place foil. It was redemption for the Tunisian athlete after she had lost to Shaneva at the world championships in Moscow last year.

Boubakri paid tribute to Arab women after her win, “I hope that this will be a message for all Tunisians, especially our youth, all Tunisian women, the Arab woman,” the 27-year-old Olympian says. “A message which says that you must believe that women exist and they have their place in society.”

Sara Ahmed of Egypt made Olympic history as not only the first Egyptian woman to ever stand on the winners’ podium, but also the first Arab woman to medal in weightlifting. 18-year-old powerhouse is bringing home bronze after successfully lifting a combined weight of 255 kilograms, or 562.17 pounds. She looked badass doing it.

“A new weightlifting generation can be born, a new beginning,” Ahmed says of her accomplishment.

Before Ethiopian marathoner Feyisa Lilesa breezed past the finish line of the men’s marathon in Rio, he crossed his arms over his head in solidarity with his Oromo people, Ethiopia’s largest ethnic group that has been protesting discrimination, including land seizures, by the government. Lilesa repeated the gesture at a press conference.

Rule 50 of the Olympic charter, put into place after American athletes of Tommie Smith and John Carlos made a black power salute at the 1968 Summer Olympic games, bans political gestures, however the IOC response is the least of Lilesa’s worries.

Despite winning a silver medal for Ethiopia in the event, the Oromo marathoner is now fearing for his life back home. A crowdfunding campaign has been started to assist with Lilesa’s relocation. So far, more than $50,000 has been raised.

Ranked 112th in the world, Zambian judoka Mathews Punza seemed like a longshot. But fairly early on in the Games, the 25-year-old from Lusaka shocked the world when he defeated the sixth-ranked judoka, Israel’s Golan Pollack, in a miraculous 100-0 win. Not only that––he did it ridiculously fast. The entire bout took under two minutes.

Unfortunately, Punza was defeated later that same day by Slovenia’s Adrian Gomboc in the last 16 of the competition. But his victory against Pollack will be remembered as the ultimate upset of Rio 2016.

Chierika “Coco” Ukogu may not have medaled, as Snoop Dogg suggested, but what she accomplished in Rio is no less impressive. The 23-year-old Stanford grad put off her dreams of medical school and self-funded her way to the Olympics. She didn’t simply qualify for Team Nigeria. She built the whole damn team. And in doing so, Ukogu became Nigeria’s first-ever Olympic rower.

But she didn’t stop there. Ukogu continued to make history throughout the Games. In the end, she placed 20th overall (out of 32), and finished off with an impressive second-place finish in the Final D race.

For her efforts, the Nigerian-American rower gained quite a loyal following in Nigeria. Next up for Ukogu? Medical school. And then onto 2020 Tokyo.

South Africa’s Luvo Manyonga leapt his way to second-place finish in the men’s long jump event with a distance of 8.37m. He was in the lead until American Jeff Henderson eclipsed him on his sixth and final attempt with 8.38.

Wayde van Niekerk went into Rio relatively unknown, albeit ridiculously fast. The 24-year-old sprinter heads home to Cape Town one of the most famous runners in the world. His performance last Sunday will go down as one of the all-time greatest Olympic showings.

Running from the unlikely outside lane of the men’s 400m event, van Niekerk took home South Africa’s first gold of the Rio Games and picked up a world record in the process. Clocking in at an unimaginable 43.03-seconds, the 8th-ranked South African outran two former Olympians (it wasn’t even close) and obliterated American track-and-field great Michael Johnson’s 17-year 400m world record by .15 of a second.

And it seems the more we learn about van Niekerk the more in love we fall. Right before his win, the U.S. broadcaster NBC ran a segment on van Niekerk’s relationship with Ans Botha, his 74-year-old coach at the University of the Free State, as well as on van Niekerk’s mother, Odessa Swartz, a promising athlete in her own right who was prevented from competing at the international level by the then apartheid regime.

Van Niekerk’s victory is a huge win for the whole of South Africa. But its significance to South Africa’s marginalised coloured communities should not be lost. Van Niekerk’s race was a definitive moment of #ColouredExcellence.

King @usainbolt to Prince @WaydeDreamer - You are ready to take over from me now. Track needs you! #trackisback pic.twitter.com/UZf48yKvmQ

Wayde van Niekerk wasn’t the only South African to make history last Sunday in Rio. Akani Simbine didn’t medal, but his performance in the men’s 100m deserves respect. The 22-year-old from Kempton Park, Johannesburg, ran a phenomenal race and proved he could his own against Usain Bolt and Justin Gatlin.

Simbine, who holds the current South African 100m national record, came in fifth with a time of 9.94 seconds. He was just .01 shy of Jamaica’s Yohan Blake in fourth and .03 off of Canada’s Andre De Grasse in third.

Lining up to the final was a historic feat in itself. In doing so, Simbine became the first South African to make it to the men’s 100m final since Danie Joubert in 1932. The young runner is definitely one to watch at the 2017 IAAF World Championships in London.

Caster Semenya may not have broken a world record as many were hoping, but she did exactly what she set out to do. The 25-year-old middle-distance star from Polokwane brought home South Africa’s second gold of the Games with a first-place finish in the women’s 800m event.

In doing so, she set a new national record with a time of 1:55.28 and made history as the first black South African woman to win gold at the Olympics.

It’s been rough in Zimbabwe this year from social unrest to economic hard times, so the women’s football team’s first ever qualification at an international sporting event provided a welcomed distraction. Although the team didn’t medal, their appearance in Rio remains an impressive achievement for a team plagued by financial instability.

And Marjory Nyaumwe, we saw you reppin’ for the people, rocking your Congo-inspired ‘do during Zimbabwe’s opening match against Germany.

In addition to being Egypt’s first women’s beach volleyball team to participate in the Olympics since the sport was added in 1996, duo Doaa Elghobashy and Nada Meawad became the first squad to appear in long-sleeved uniforms after the FIVB relaxed its regulations in effort to be more culturally sensitive ahead of the 2012 London games. Elgohbashy also wore a hijab that covered her hair, which was permitted in a last minute decision by the International Volleyball Federation (FIVB).

Their deference to Egypt’s Islamic culture of modesty has been well-received and greatly contrasted the scant uniforms of German players Kira Walkenhorst and Laura Ludwig.

This post was written by Erin C.J. Robertson (ECJR) and Alyssa Klein (AK)