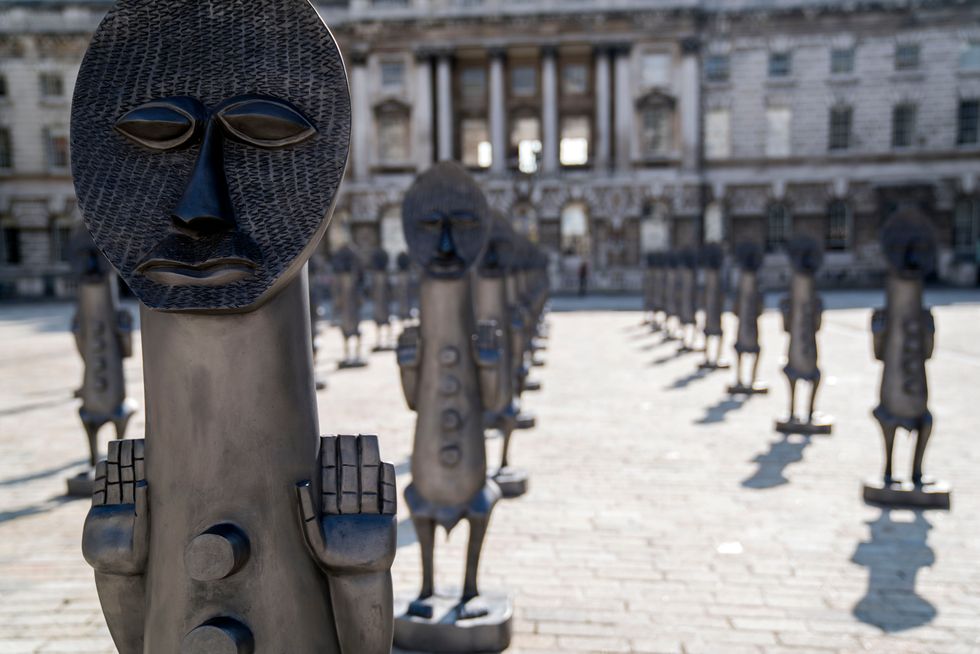 If you're in London, you need to check out these must-see 5 highlights at 1:54 Contemporary African Art Fair.

The fourth edition of 1:54 Contemporary African Art Fair brings together over 40 exhibitors from 18 countries to showcase a diverse range of contemporary work by leading artists from the continent and diaspora. Named after the 54 countries of Africa, the ambitious fair will shine a spotlight on African art at Somerset House, the majestic Tudor palace overlooking the Thames.

Following a well-attended symposium at New York’s Armory Show earlier this year, 1:54 is poised for strong sales. With over a third of the galleries at this year’s fair exhibiting for the first time, collectors and art enthusiasts at 1:54 will enjoy a three-day celebration of African artists at the vanguard of their disciplines.

FORUM, the fair’s extensive series of talks and events, will once again run alongside the fair, and will bring together artists, exhibitors, and cultural critics to explore convergences across artistic and cultural production.

Below, we share our favorite highlights of this weekend’s 1:54 London:

1. “Black and Blue: The Invisible Man and the Masque of Blackness,” Zak Ové

The “invisible men” standing guard both recall Ralph Ellison’s classic and harken back to the famed Yoruba masks that mark the aesthetic of the cool. The installation, also a commentary on power, beauty, and identity, references a play written by Ben Jonson and enacted by Anne of Denmark and her court ladies, painted in blackface, in the courtyard of Whitehall Palace in 1605. The play reflected a shift from earlier appreciation of black beauty to a preference for lighter skin in the 17th century. In reclaiming the name of the play and situating his army in the neoclassical palace, Ové affirms that black lives matter.

The fair’s crown jewel, although not for sale, is “Malick Sidibé: The Eye of Modern Mali,” an exhibition presented by 1:54 in collaboration with MAGNIN-A. Located in the main hall, the stunning 45 black-and-white photographs celebrate the jubilance of post-independence Mali. Known as the “eye of Bamako,” the late artist gained a formidable international following as one of the fathers of African photography, subverting narratives through spontaneous images of Bamakois dancing and modernist studio portraits of the city’s youth.

As you enjoy your delicious peri-peri chicken on your next trip to Nando’s, stop to look at the art. The South African chain, which owns over 1,000 restaurants in 30 countries, is also home of the world’s largest private collection of Southern African art. Founded in 1987, Nando’s has been working with artists since 2002 through a close partnership with Cape Town-based Yellowwoods Art, a firm specializing in creating opportunities for budding South African talent. At 1:54, Nando’s and Yellowwoods present a few of the artists that feature in their UK collection. Stop by to see works by Regi Bardavid, Lizette Chirrime, Pat Mautloa, and Maurice Mbikayi.

At this year’s fair, Alexandra Karakashian will create a site-specific installation entitled “PASSAGE.” The piece, much like much of Karakashian’s practice, draws from her family’s experience escaping the Armenian genocide and migrating through Africa before settling in Johannesburg. Through oil and paper designs, Karakashian reflects on issues at the forefront of exile, migration, and the environment, issues at the heart of today’s Euro-African relations.

The 1:54 Lounge and Bookshop are not only an opportunity to relax and reflect, but to see how designers are pushing the boundaries of functional art. This year, designer Ifeanyi Oganwu (Expand Design Ltd.), visual artist Phoebe Boswell, and textile design firm Toghal have collaborated to create forty unique stools and cushions. A modernist take on the traditional stools common across West Africa, the contemporary work, entitled “Pedestal + Duniake,” also celebrates East African culture by drawing inspiration from the traditional Swahili kanga. In addition to the interior spaces of the 1:54 lounge, Toghal has also collaborated with designer Lulu Kitololo to create a collection of cushions that will be positioned on a number of Somerset House’s terraces. Draw some inspiration from the bold designs of the collection, which is up for sale during and following the event.

1:54 Contemporary African Fair takes place Thursday, October 6 through Sunday, October 9, at Somerset House in London. Tickets are available for purchase online via Eventbrite. Keep up with 1:54 on Facebook, Twitter, Instagram and their official website.