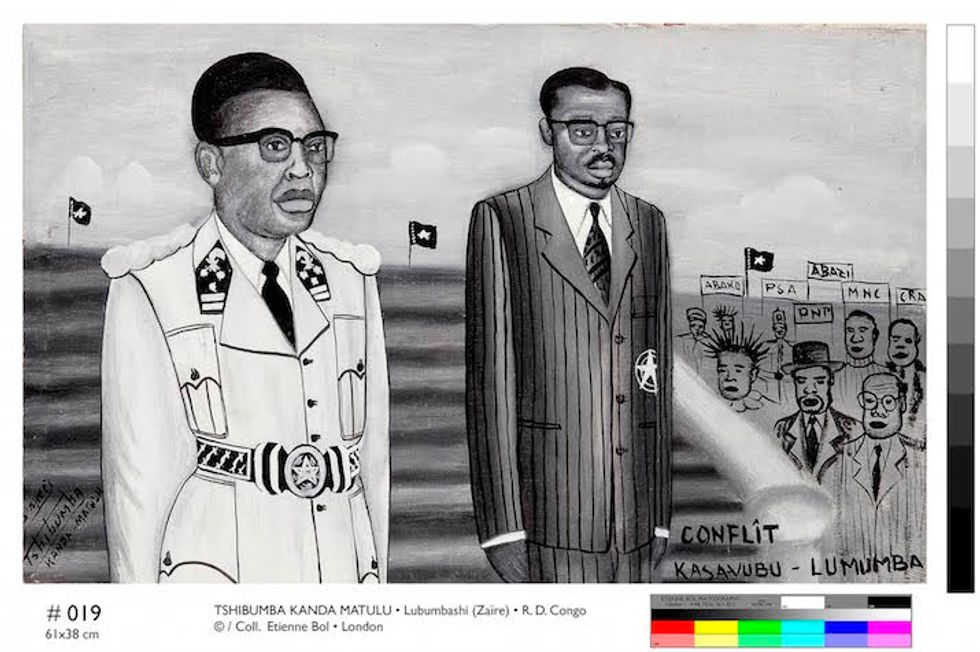 '53 Echoes of Zaire: Popular Painting from Lubumbashi, DRC' is on view at the Sulger-Buel-Lovell Gallery in London.

Last week, the Africa Centre and the Sulger-Buel Lovell Gallery in London opened the 53 Echoes of Zaire exhibition, a collection of paintings by the late Congolese artists T. Kalema, C. Mutombo, B. Ilunga, Ndaie, and Tshibumba Kanda Matulu, the featured artist in the show.

All of the works were created in the late 1970s, less than a decade after Zaire, now known as the Democratic Republic of the Congo, gained its independence from Belgium.

Also included in the exhibition are contemporary documentation and original photography that focus on the life and works of Matulu, a historian and educator who is also credited with leading an artistic movement in the Congo in the early days of independence.

According to the gallery’s press release, the movement’s aesthetic was geared toward the recognition of “ancestral origins, colonial history, the fight for independence, [and] post-colonial struggles for power.” It was intended specifically for local people.

The styles and sensibilities of the different artists featured speaks to the myriad ways the colonization of Zaire was interpreted by the artists who grew up with one foot rooted in imperial rule, and one in sovereignty.

Kalemba’s paintings, for example, seem to make use of the entire color palette. The brush strokes range from soft and creamy to sharp and articulated; at times the works look impressionistic. But the softness and the lush natural scenes that surround the subjects is juxtaposed by the action taking place. In work marked #048 in the exhibition, Belgian colonizers engage in a transaction with a royal figure of Zaire; meanwhile, the newly traded slaves (presumably), strung together by a long rope fastened at their necks, are taken away.

By comparison, Matulu’s paintings take on a more overtly political tone; the subjects and scenes he depicts in his works are closely tied to the events that led to the independence of the Democratic Republic of Congo in 1960. Patrice Lumumba, clad in his iconic thick-framed lenses, is a recurring subject in Tshibumba’s paintings, and the scenes he imagines reference Lumumba’s assassination and the gross disparity of power between the Belgians and people of Zaire.

“The collection is notable for its consistency, quality and its unique contribution to the history of popular painting in the urban and industrial Katanga region of the Democratic Republic of Congo,” the gallery’s press release reads.

53 Echoes of Zaire is on display at the Sulger-Buel Lovell Gallery in London until June 30.