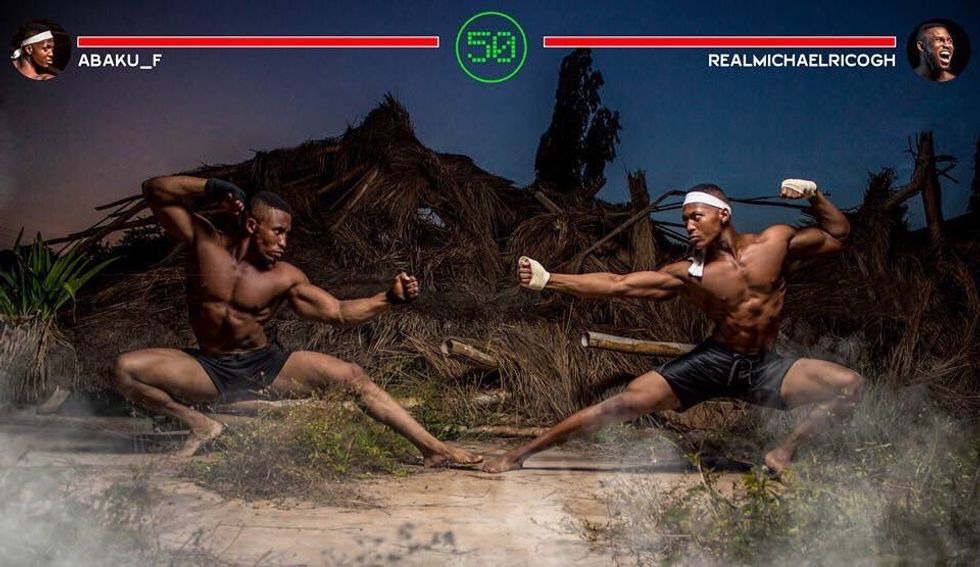 The following six Ghanaian artists take nuance to heart as they use photography to depict their creative concepts.

The creative mind, often restless, yearns to find new avenues to exercise the angst that plagues it. In everything from music to design, we continue to see new creatives, striving to break the mold and follow their own path. Ghana has a rich photographic tradition, with legends like James Barnor and Bruce Vanderpuije being part of the stellar canon through which one can vicariously experience the Ghana of yesterday in all its diverse aspects.

Despite the fact that fashion, travel, wedding and event photographers are producing commanding visuals that combat the vile misrepresentation of Ghana and Africa as a whole seen in mainstream media, other creatives seek to go even further and challenge how we perceive an image. Through nuanced composition and embedded concepts, these new age photographers’ work will leave you awestruck.

The Day I Held Myself Together This is one of the images exhibited at Second Chance; Second chance is exploration of intimacy - with the self, the image, the human form, emotions, memories, kinship. It counteracts the policing of women’s sensuality while critiquing conservative and uniform standards of behaviour and beauty for Ghanaian women. I use intimacy as an instrument of resistance and a mechanism to trigger a healing process while also inhabiting a reality that persists in normalizing social repression. #mumblephotography #digitalart #photoexhibition #femalephotographer #art #accra #Ghana #photomanipulation #intimacy #selfportrait

Digital artist Josephine Kuuire’s body of work relies on digital manipulation and portraiture to provide alternate representations of the self. Using herself as a muse mostly, she looks inward through her lens to examine deep-seated conflicts that echo gender, identity and representation debates. Staring at Kuuire’s nuanced reconstructed shots, you get a sense of longing and search, maybe for healing or respite? Her first major exhibition, Second Chance was held at the Accra[dot]Alt space station earlier this year which highlighted her first cohesive body of work.

#Sassa @gallery1957 will be up for one more day. Screenprints from the selfportrait series will be shown at the Joburg ArtFair with @marianeibrahimgallery Sept 9-11th. "Paul West Home speaks from a legend in which Tezcatlipoca gives his opponent Quetzalcoatl a mirror to destroy him. As Quetzalcoatl sees himself in the mirror, he becomes horrified by his ugliness, such that he requests that a mask be made for him to conceal his face forever. Via the power of the mask, he frees himself from his own being and transforms into a higher personality. The mask hereby stands out as a second “I”. The second “I” is a characteristic element of magical significance in all Mesoamerican cultures: „The pre-Columbian man has two names. Aside the normal name in the daily life, he has a ritual one- the name given at his birth which signifies the day. Two names, two different personalities: One corresponds to the physical-real, the other to the ritual-personality.” From the The Art Old Mexikos, 1966 @fnbjoburgartfair #camoflauge #disguised #cyperuspapyrus #wisteria #selfpotrait #screenprintedfabric #accraartist #spirituality #belonging #home

Sometimes, images require some level of texturing to translate a tangible experience to the audience. Zohra Opoku frequently incorporates textile into her photographic work to convey some sense of crisp and grit you did not know you needed. Her exhibition at Gallery 1957 in June centered on the politics of identity, displacement and culture relied on Akan cultural thematics, from which its title Sassa is borrowed. Sassa is an Akan concept about the soul inside and outside its designated or assumed place. By investigating the role of textile culture in Ghanaian traditional and contemporary societies, she probes and stirs up discussions on the political and psychological tangents. Opoku provides a fluid and transient trip through tradition to experience the modern world.

Everything looks better in black and white. Ofoe Amegavie’s spine-chilling Instagram feed is one of my most potent sources of evidence to validate this saying. His signature monochrome collection of stark and stealthy scenes will easily light up your mind. However, Amegavie’s strong presence on the photography scene in Ghana is as a result of his tenacity and versatility. With exciting and striking images in fashion, events and documentary realms of photography as well, one can’t help but wonder how the artist is able to masterfully steal such beautiful, yet transient moments and preserve them in time. In his first major exhibition, Susuma Sane, he interrogated identity politics by focusing on the basic element of a person—the soul. Additionally, his work with ANO Ghana and the Kiosk Museum project features some of his potent documentary work form his Kingsmen photo series, an intimate exposition of the people at the heart and periphery of traditional royal systems. With his profound use of symmetrical back-grounding and terrifyingly exciting photo compositions, Amegavie transports his audience into a multiplicity of realities.

One of the enduring mechanisms of Accra is the intersection of culture and personalities, creating a mercurial collage of visual spectacles. Caleb Prah chooses to divulge on the area through the collage in his Madonna series. Debuted at the Cornfield In Accra exhibition, Prah magnifies and presents head-porters (Kayayei) in a new an iridescent light. This group of manual workers, who migrate from the northern parts of Ghana to seek better economic opportunities in the capital, are often the subject of various negative and exploitative gazes. However, Prah uses the weathered and tired bases of their head pans with which they bear severe loads in the scalding Accra sky as a sacred halo. His portraits on glass composed of vibrant colors and gritty expressions are heavenly tribute to these women disregarded by many.

Throwback to when Ghanaian photographer Brian Gray created his own version of Mortal Kombat.#AccraWeDeypic.twitter.com/x9uAlKqKIh

Mortal Kombat, the highly successful video game franchise, has fans in dozens of moments of bliss locked in battle with each other. Other fans have fallen in love with the character design and over-oriental aesthetic that characterises the game. Brian Gray replicates these designs in his hyperrealistic photographs. With localized characters and an ample amount of post-production, Gray’s work is a more than accurate reconstruction of live action scenes from the film. Having gone viral on Twitter, some may say that his shots look even better that the original graphics used in different versions of the game.

starting to document the entirety of this piece. #latitudes #writing #arthistory

Language and images are always competing for our attention and the debate as to which has a stronger impact on our minds will rage on for eternity. Kenturah Davis seeks to contribute to this debate by incorporating both elements in her artwork. Different elements of text, portraiture and collaging are alchemized as she forages for a deeper understand of the vertices that unite or separate language and imagery. Davis also employs flags and textiles as her canvasses on which she creates debate-inducing statements.