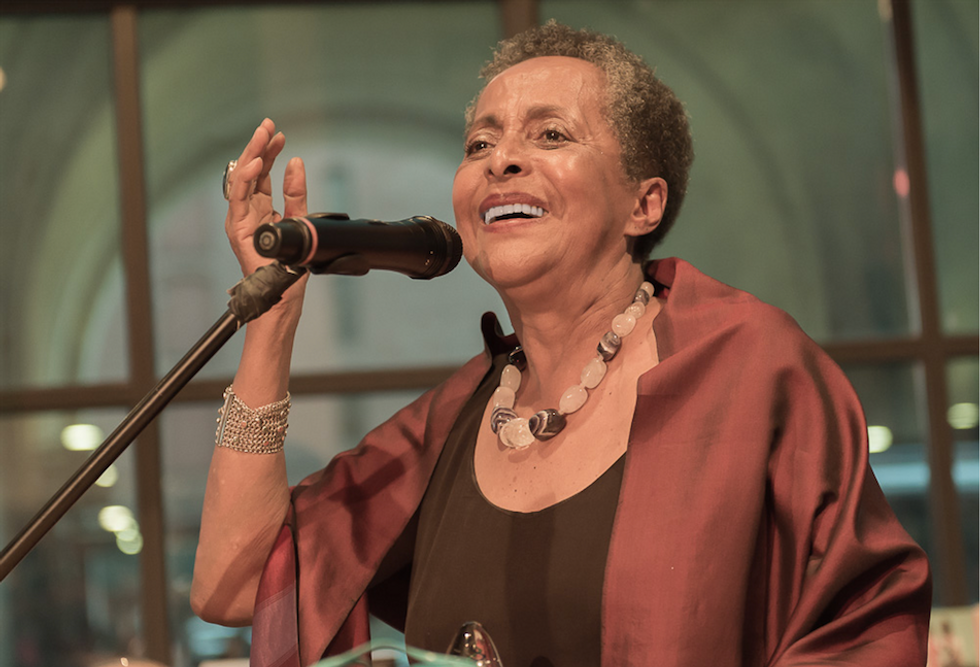 Afro-Peruvian singer Susana Baca was the honored guest at this year's Afro-Latino festival in New York. Here's what we learned from her talk.

DIASPORA—Two-time Latin Grammy winner Susana Baca was recently given the Lifetime Achievement Award at the Afro-Latino Festival of New York in recognition of her role as a key figure in the revival of Afro-Peruvian music and as a socially conscious advocate for Peru’s afrodescendientes.

The 73-year-old gave a short, tearful speech upon receiving the award and ended with an impromptu a cappella version of her signature song, “María Landó,” the lyrics of which speak to the exploitation of working class women. Solidarity, in addition to gender equality, was a recurring theme throughout the evening.

Below are some highlights from the award ceremony, which was followed by a dialogue with Baca and a book presentation alongside her husband, Bolivian musicologist Ricardo Pereira.

It was, as this year’s theme suggested, a celebration of women.

Baca acknowledged the influence other women have had on her, “First off, I have to acknowledge the invaluable experience I have shared with the women and artists that showed me how to be an artist preoccupied with our importance and the history of our people.”

She later spoke in praise of her mother, a single parent who worked as a cook and house cleaner to support her family:

“She took me with her everywhere. She had no one to leave me with. And since I was an active child, she had to find ways to keep me calm. She made me sing so that I wouldn’t eat the ingredients. She made me dance so that I wouldn’t touch anything. But even though it seemed like a punishment at the time, it helped to form my character.”

The talk emphasized Baca’s unfailing dedication to solidarity with other women.

“I share this great honor with the women in Peru that are, at this moment, in the fields, working, supporting, each day, the countries in which they live, and growing in the spirit of solidarity.”

Baca then performed an a cappella version of her signature song “María Landó,” the lyrics of which are adapted from a poem by César Calvo and refer to the exploitation of working class women.

She brought up privilege within the struggle and how to address it.

“It’s not the same being a Quechua-speaking woman living at three-thousand meters of altitude, a Spanish-speaking woman at sea-level, or a black Peruvian woman in the city or the countryside. It’s a little harder for some of us than for it is for others to be recognized by the rest and achieve success. The opportunities to get ahead are based not only on economics, but rather in the way women participate in society. There are women who haven’t even seen a notebook. Therefore, their presence in the society is weaker.”

She talked about efforts to remedy the invisibility of afrodescendientes, both in Peru and around the world.

“It’s important they’ve managed to get the United Nations to adopt an initiative that recognizes the presence of the global African diaspora,” she said in reference to the International Decade for People of African Descent declared by the UN in 2015.

“In Peru, they have put together a plan in regard to the rights of afrodescendientes,” she added. “They have approved it, but in reality, nothing has changed for us. So what’s left for us is the task of create awareness among the black community and to reclaim the pride of being an afrodescendiente.”

Photograph by Nívea Castro from the New Visual Collective

She cited the Peruvian government’s official apology to its afrodescendientes in 2011, the first ever by a Latin American nation, as an example of this empty rhetoric.

“That asking for forgiveness was a photo-op. Afterwards, everyone went back to their homes. But it would have meant so much more if the state had worked in rural areas, where the schools are really bad, to improve those schools, improve health conditions.”

Her discussion of structural racism in Peru was an eye opener.

“There is something that does a lot of damage to us, and that is racism. It is like a daily virus in our countries. Racism is present, for example, in how the state has a way of marginalizing people just for living in the Andes, or living outside of the capital. This way of forgetting about these towns, that for me is racism,” she said. “We have to work on that. We have to penalize that kind of racism by passing laws.”

And when asked to describe her experience with success, Baca responded with a memorable anecdote.

Baca won the first of two Latin Grammy awards in 2002 when she won Best Folk Album for Lamento Negro. Although an official ceremony was later held in front of the Government Palace of Peru, it was returning to Cañete, where Baca and her family are from, that she felt truly recognized for her accomplishment:

“I had to walk through the streets of the neighborhood toward the main plaza, and in that moment, when the doors of the houses opened and the women came out to see me passing by, they said, ‘That’s Susana Baca. Because of her, the world knows who we are.’ And that was the most valuable award, more than the Grammy, more than anything, those words and that applause.”

The book is a follow-up to an earlier project in which Baca and her husband documented Afro-Peruvian communities along the coast. Two decades later, the forced migration of rural, indigenous peasants to more urban areas had changed the demographics of these communities dramatically, seemingly diminishing the presence of Afro-Peruvians.

To the surprise of Baca and her husband, however, the waning Afro-Peruvian traditions were now being kept alive by the new, indigenous arrivals. “It [blackness] is not a skin color, we learned. It’s an essence,” Baca said, echoing her husband’s words.