This Theatre Incubator Is Using Experimentation to Rethink Ghanaian Tradition 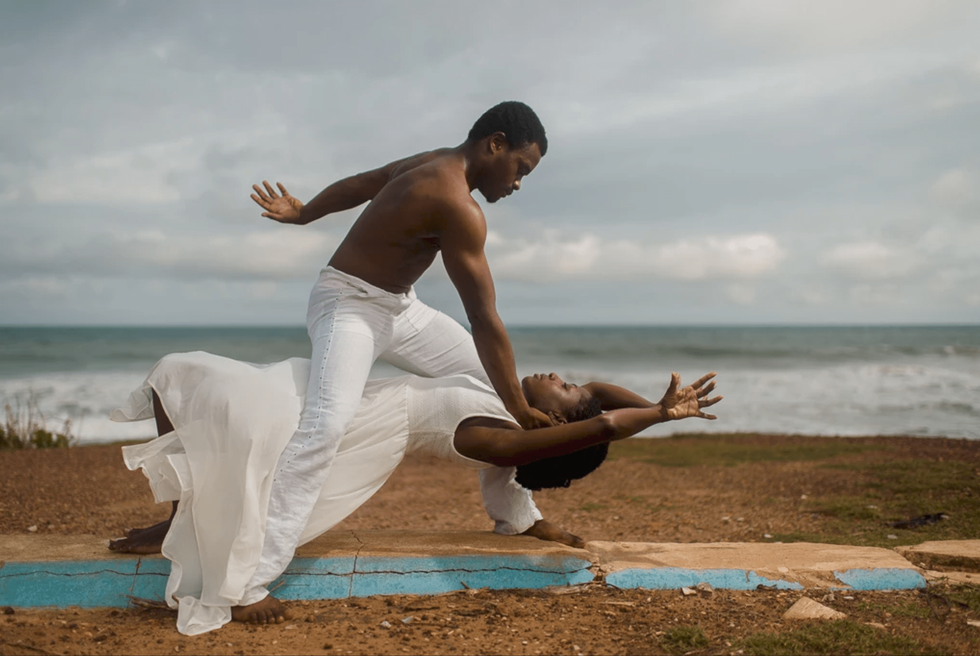 Most of this positive, self-propelled growth, however, is still new to the rest of the world. Accra Theatre Workshop (ATW), is one of such landmarks in the vista that is gradually growing to fill up the frame in snapshots of the city's creative scene.

The aptly named theatre lab is an incubator space and performance focused workshop designing alternative entertainment built on the nation's rich theatre history and reprogramming various artistic performance rituals and storytelling practices that feature in everyday Ghanaian life on stage. The project, started by Elisabeth Efua Sutherland and Emelia Pinamang Asiedu, two young women with dance and theatre backgrounds is in its fourth year of existence. They marked this with the fourth iteration of their popular experimental short played festival, last weekend in Accra.

An African Walks into An Echo Chamber, a three-night show, offered writers a chance to respond to a theme and produce experimental work that investigated communication in the age of social media. The work shown cut a jagged cross section of African communication patterns across various mediums—from open conversation to online banter. Before the final night, I sat down with Sutherland, co-director of ATW, to talk about this sacred performance and theatre groove that have succeeded in etch for themselves.

The project was birthed from the search for a similar experimental space to the ones Sutherland was interning in, after she moved back to Ghana over seven years ago. "I was looking for a more experimental space but I wasn't finding it. So I went to some of the more established theatre spaces like the National Theatre, and I spoke to one of the creative directors. He listened to me for a few minutes and said I should start my own thing. So that's what I did," she tells me, as she grills chicken wings for the cast just before the show begins. In-between noise of the sizzling wings and the constant drawn out growl from the busy street close by, Sutherland recalls the genesis of her project with Asiedu, her co-director. "My cast and crew, they say I'm the dreamer and she sort of brings me back to earth; we balance each other out." At the time I spoke with Sutherland, Asiedu was not present at the show, but the bond that is their sisterhood continues to guide their practice.

In the An African Walks series, 10 minute experimental plays are presented on stage in one night from a group of writers who workshop their pieces and find ways to make them work on screen. "This is our first show actually, and it come out of a format that is more popular outside of Ghana," she says. "Emelia and myself had both been involved in productions that involve short experimental plays presented in one night. We decided to send out a call for such material and see what people send in. The name came from Gbontwi Anytewi's work which was the first submission titled, An African Walks into a Psychiatrist's Office. That's where the title [of the series] came from."

Since 2013, they have produced other editions that examine the politics of various private and public spaces, exposing behavior patterns among Africans in these spaces—some of which are never critically examined—including voting booths in 2016, and shipping containers in 2015.

Experimental theatre set ups are not exactly alien to Accra or Ghanaian culture, as there is a great history of folk storytelling among the various ethnic groups. The Ananse folklore tradition happens to be one of the most popular as the collection of short stories from the trickster tales still serve various functions in Ghanaian culture. Efua Sutherland, Elisabeth's grandmother and one of the most renowned Ghanaian playwrights and architects of contemporary Ghanaian theatre, used the traditional template to reinvent folk storytelling tradition in the 1960s, with, Anansegro, her hybridized form of the traditional theatre and storytelling format.

Sutherland tells me about how she's just beginning to notice the parallels in theory and practice in their work. "A lot of people try to relate my work to my grandmothers," she says, "but I am now getting to know a lot of the theories behind what she was doing which was in the 60s. We have the traditional Anansesem and then we have what she was doing, which was Anansegro. And the difference was that the Anansegro was a bit more stylized, whereas Anasesem was more direct and less experimental. She took the traditional form, played with it and subverted it by switching genders and characters."

Decades later, her granddaughter is achieving a similar feat with experimental theatre in Accra on Efua Sutherland's land. Terra Alta, the serene outdoor space, neatly tucked into the hustle and bustle of Accra, is Sutherland's studio and workspace, also the venue for the show. "ATW have also being doing similar things in experimentation with tradition and form by altering arrangements, using projections, and other subtle ways, mostly in my personal practice," she says. "I've actually done a piece titled, Ananse's Wife, Akua's Daughter, which writes the story of the wife character in the series. We try to always remind people that there is a base of performance traditions around the way we talk and move that is an embodied history. So as an artist, that is where your work conscious or subconsciously comes from and it feeds from there into the future."

Despite the inspiration that the city of Accra does serve up in abundance, it also engineers quite difficult situations that hold you back from achieve your dreams. For Sutherland and ATW, financial issues like production costs do not hold them back from being bold and telling unheard stories, with all of their shows being self-funded and supported by other creative spaces in Accra. "ATW doesn't have any external funding, all the shows have been self-funded. It is expensive to do things in Ghana in general," she adds. "Most of the time you're renting equipment at 100 percent of what the person paid for it. It does make sense to keep renting, [but] it's not sustainable. It's going to be a big challenge going forward if we do not adjust or find paying models. So we've just bought a lot of our own stuff because I'm just sick of renting. You're mostly being taken advantage of. We do have a lot of support from the Nubuke Foundation, who has been our partner as long as we have existed."

There is also the added weight of being a woman creative in Accra and the unnecessary challenges that accompany that. "There's always nonsense around it, being young and being female. You get nonsense if you're [not] male and old. So it's not surprising," Sutherland says in a very cavalier manner, unfazed by those blocks against women creatives that should not exist.

"There's no respect sometimes. For me, it's problematic but it's not something that holds me back. I just deal with it and move on. But I would like for that to change." Indeed, Sutherland and Accra Theatre Work do use their space and energy to support projects that champion the respect for the right of women in creative spaces. One of such initiatives is Drama Queens, run by Nana Akosua Hanson. "It is a feminist theatre collective, championing women's rights and sex education around consent in schools. Sex is still very taboo in Ghana and people still don't see the need to have such conversations."

Accra Theatre Workshop's ethos is deepening the quality of experience and expanding it through discourse outside the stage. Aside their shows, they periodically host a number of workshop projects for young actors, directors and writers throughout the year, notably among these is the Summer Shakespeare project. Over the long vacation in the Ghanaian school year, the team attempts to get young kids interested in drama and theatre by bring the material down to their level. This project also emerged from the will to plug a hole Sutherland and Asiedu noticed in their environment.

"It's a passion point for both myself and Emelia. When we were growing up, there weren't such programs available," Sutherland says. "There's a huge disrespect for what we do, because people don't understand the work that goes into it and they are not being trained on technique, content or interpretation. So they think you're just running around having fun. We have a professor coming from DuPont University in October to discuss ways of making these things [the Summer Shakespeare project] more sustainable."

For now, the project represents Accra, but Sutherland tells me they are interested in forging strategic partnerships that will allow them to grow their workshop project via touring and other remote projects that further the African experimental theatre scene.

"We're happy to represent Accra elsewhere, but the focus of the work is Accra for now," Sutherland says.

Regardless of the location, be it physical or digital, Accra Theatre Workshop's work and philosophy of experimentation is reverberating across the continent and are living proof of how bold risk-taking is essential for growth in the African creative scene.