Toyin Odutola's Exhibition 'My Country Has No Name' 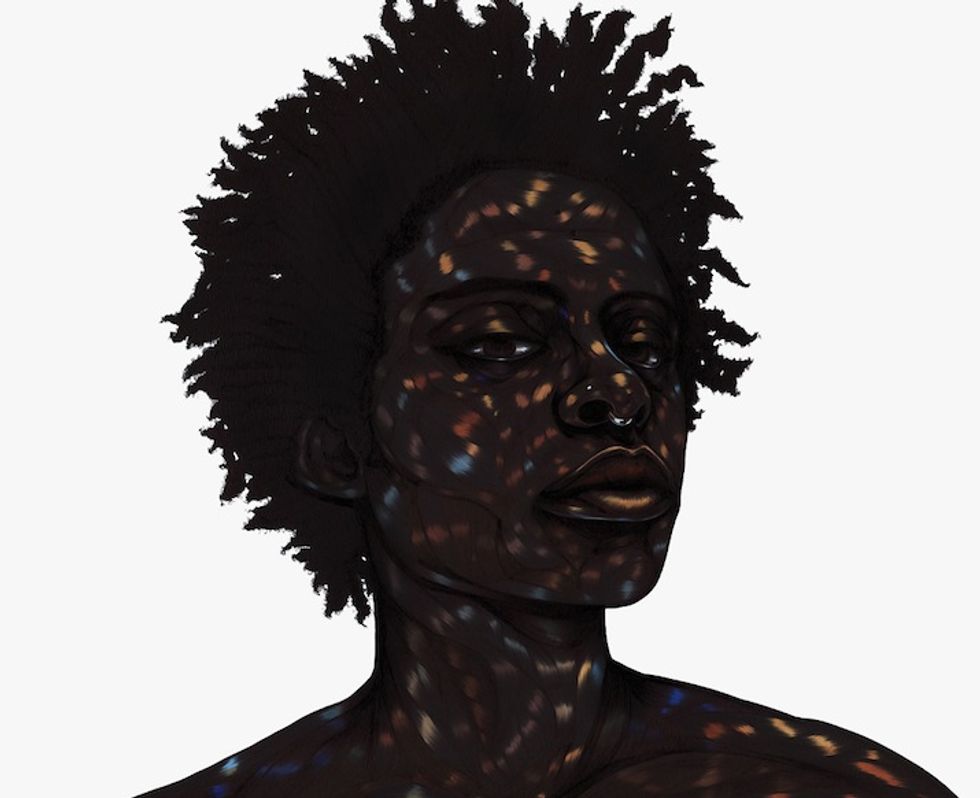 Artist Toyin Odutola will be displaying her striking pen-and-ink drawings in a new exhibition entitled My Country Has No Name at the Jack Shainman Gallery in New York City, from now up until June 29, 2013. Born in Nigeria, recently graduated with an MFA from the California College of the Arts and based in Alabama, Odutola herself is a case study in intersecting identities — sometimes in harmony, other times in conflict. By using the human body as a visual framework, the artist uses meticulous line strokes to interrogate ideas of personhood, nationality, and self-identity with intricate detail. Odutola says of her work:

Skin as geography is the terrain I expand by emphasizing the specificity of blackness, where an individual’s subjectivity, various realities and experiences can be drawn onto the diverse topography of the epidermis. From there, the possibilities of portraying a fully-fledged person are endless.

In the series, Changing Tone, Odutola uses metallic Sharpie markers to create the luminous complexions of her subjects - in one such piece, the two male figures appear to be painted in the inverse: the pink and gold textures of their skin and hair drawn in sharp juxtaposition with the stark black background. The title of the piece and its dedication, reveal another reference: The story of the hunt glorifies no one. (Homage to Chinua Achebe) places Odutola's work into the context of the celebrated Nigerian author, who before his passing earlier this year once warned against "the danger of not telling your own story." By reversing the colors of the subjects' skin and the background, Odutola raises another question of identity in context: how much of our self-images are attached to our surroundings? What happens when those contexts change - do our identities change as well? Or do they disappear altogether?

The graphic appeal of Odutola's work extends beyond its immediate strikingness, although the concept of identity through visuality is a constant theme. In a statement from the gallery, Odutola's show "is an exploration of identity rooted in the friction created by hyphenated nationalities and a study into what comes from a reconciliation of seemingly distant and divergent cultural homes to form a new multilayered reality." Another series in the exhibition, All These Garlands Prove Nothing, features a number of self-portraits documenting the artist's hair styles from a four-year period in her life, capturing different personas in scope of one person. As the title of the series suggests, the artist uses herself as a fixed subject to explore the intricacies of presentation of the self, and asking what they ultimately prove.

More information on the exhibition can be found at the Jack Shainman Gallery. If you're in the NYC area, be sure to see My Country Has No Name on display now until June 26.