Black to the Future: OkayAfrica's Introduction to Afrofuturism 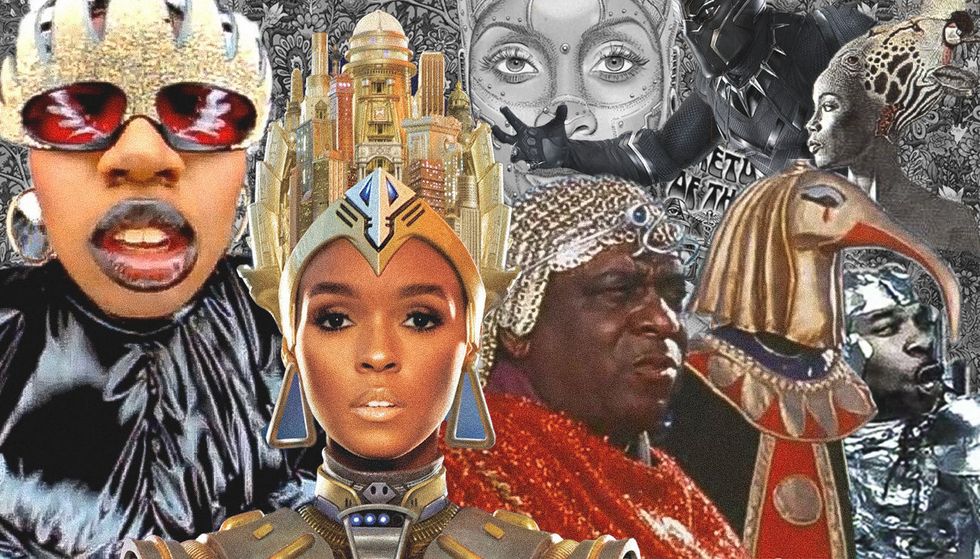 We take a look at the history, aesthetic and philosophy of Afrofuturism.

DIASPORA—The first time I spotted Afrofuturism—and had an inkling of what it was—was in college when I saw Janelle Monae’s “Many Moons” music video.

The video featured Monae and her many cyborg clones in the annual android auction, which eerily recalls a slave auction, but poses as a fashion show. Monae takes on the persona of Cyndi Mayweather, a cyborg 9000, and she performs while her androids rip the runway.

Although the setting is an auction, “Many Moons” is the antithesis of enslavement: her lyrics urge the fight for freedom, love and social change. “Your freedom’s in your mind. Your freedom’s in a bind,” she sings.

Monae’s oeuvre contains some of today’s most obvious takes on Afrofuturism, but there are several earlier depictions of Afrofuturism in pop culture that I, and you too, I hope, have been exposed to—perhaps without even realizing it. Take, for instance, the otherworldly, videogame-esque lands found in Missy Elliott’s music videos, or Janet Jackson and Busta Rhymes' “What’s it Gonna Be?,” where Busta travels, in the form of water, to a stunning, space queen Janet, before melting into her body.

The 90s saw many black artists exploring Afrofuturism in their quirky, strange music videos. And I mustn’t forget a staple in my childhood that, until recently, I hadn’t realized fit so seamlessly into this category: The Wiz. The Emerald City scene, filled with a plethora of fashion savvy civilians dancing to the dictation of colors, is a groovy, metallic exhibit of formation.

Yet, before I continue exploring pop culture references of Afrofuturism, I must explain what it is. First articulated and penned by writer Mark Dery, Afrofuturism is the expression of blackness, black struggles and black ideas, through the imagining of new, hopeful and advanced futures or worlds. It is a way of understanding the past and present, by crafting futures that we can control. With the use of magical realism, afrocentricity, African traditions and aesthetics, intertwined with technology, sci-fi and social awareness, Afrofuturism narrates a parallel or distant reality that is empowering and effervescent.

Mark Dery’s essay “Black to the Future” explores the many facets of Afrofuturism and it’s cultural and social significance for black people. He wondered why there were so few black sci fi writers: at the time this essay was published (1994), he could only shout out Samuel L. Delany, Octavia Butler, Charles Saunders and Steve Barnes. Twenty-three years later, there’s a wider pool of black sci fi authors to pull from, including N.K.Jemisin, Nalo Hopkinson, Geoffrey Thorne, Nnendi Okorafor and Tananarive Due.

Yet, one notion that was pressing to Dery, was what this artistic movement meant for our past and future:

Can a community whose past has been deliberately rubbed out, and whose energies have subsequently been consumed by the search for legible traces in history, imagine possible futures? Furthermore, isn't the unreal estate of the future already owned by the technocrats, futurologists, streamliners and set designers—white to the man—who have engineered our collective fantasies?

Black history often plays out like a horrific, science fiction drama that has yet to fully resolve. Our ancestors were kidnapped from their homeland, taken to a distant country and forced into slavery. They were raped, forced to “breed” for labor and the prosperity of the economy, sold, beaten, separated, denied the right to vote, experimented on, denied equal and civil rights, denied humanity—all the while being brainwashed into believing that our race are aliens—not the abductees. Are robots—not royalty. Black history is more terrifying than any fictional tale ever told.

"Afrofuturism is a method of discussing social injustice, human nature and morality"
Afrofuturism reclaims black identity by positioning our stories, desires and potentials at the center of sci-fi and fantasy—genres that aren’t usually marketed towards or inclusive of us—and morphing us into untouchable, ethereal, whimsical beings that transcend the systemic obstacles set in place by white supremacy. Not only are we reinterpreting a genre, we’re reinterpreting ourselves.

Afrofuturism is a method of discussing social injustice, human nature and morality—Octavia Butler—or fantasizing about fashion, beauty, heightened abilities and royalty, like the photoshoots of Grace Jones, Rihanna as Tomorrow in W Magazine and Solange in her last SNL performance. It can be a conversation on our body’s relationship to our environments, like FKA twigs in her magnificent, spellbinding music videos, that juxtapose movement with otherness, sexuality and the depth of human emotion against electronic, unsettling beats.

Sometimes Afrofuturism is overtly positioned in art, music and fashion, so conspicuously that we are encouraged to embrace and confront it. Think of the musings of Sun Ra and George Clinton, the expressive, over the top glasses made by Kenyan artist Cyrus Kabiru, self portraits painted by British-Liberian artist Lina Iris Viktor, the weird wonder of Wangechi Mutu’s multimedia art and the sensual, psychedelic sounds of Flying Lotus.

Other times, it is intentionally subtle. Jordan Peele’s Get Out is the perfect horror Afrofuturistic tale: it contemplates slavery, cultural appropriation, experimentation on black bodies and the complexity of “nice” racist white people, through a refreshing tale where the black protagonist wins—not only by the power of his body, but the intelligence of his mind. There are no robots, no cosmos, no call-backs to ancient African aesthetics, just an invitation into a parallel world that mirrors our own, but houses insidious workings of an affluent white family in the suburbs.

The future of Afrofuturism is bright: we have so much to look forward to. Marvel’s trailer for Black Panther shines with black excellence and innovation. From the elegant fashion, vibrant colors, hi-tech airplanes and weaponry and intricate landscape, the superhero film seems to be a stunning moment in black sci-fi history. I was saddened to know we have to wait till 2018 to experience it.

Afrofuturism is one of our greatest artistic forms of therapy. Although underrated, it has inspired and comforted black people for several decades, while simultaneously granting us the freedom to express various creative sides of ourselves. It has helped us cope. It’s helped us believe in a better tomorrow. By writing, drawing, singing, dancing or strutting our stuff into the future, we uncovered the secret to rewriting our present.

Over the course of July we’ll be publishing short profiles, essays and interviews on the theme of “Afrofutures.” Together these stories will be a deep dive into the way African and diaspora thinkers, technologists and artists view a future for Africans in the world and outside of it.