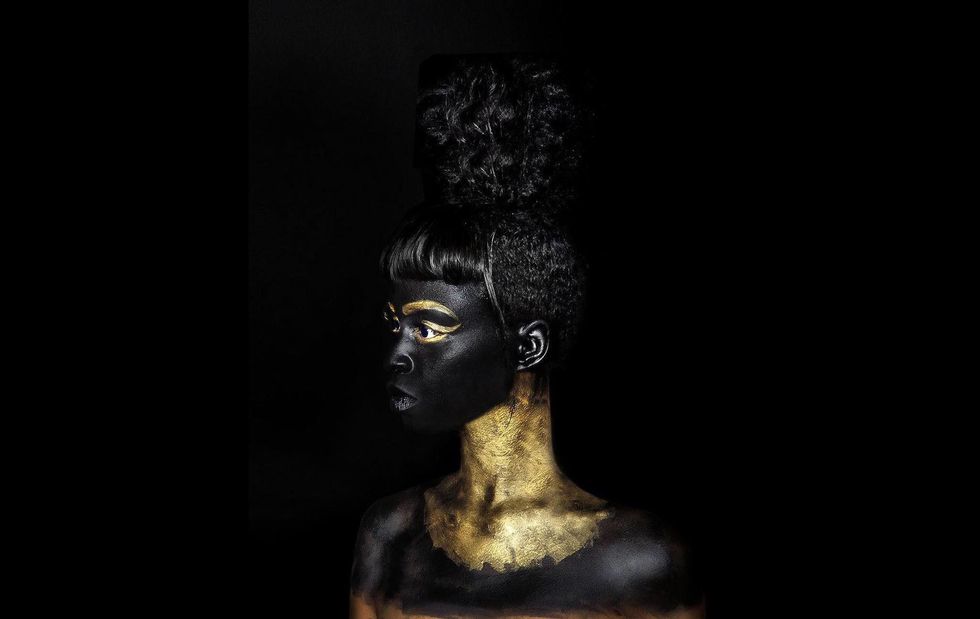 We kick off the series with artist and visionary, Lina Iris Viktor.

Self-portraiture is an expendable, infinitely interpretive space to express reflections of ourselves. In our mind's eye, we may be more glamorous than we physically present ourselves to the world, or worse: less glorious than we truly are.

British-Liberian artist Lina Iris Viktor sees her work beyond the confines of self-portraiture—a universal form that enhances her worldly persona, evolving herself into an ethereal, regal being. Using paints of white, blue, black and browns, geometric patterns, photography and pure gold, Viktor presents herself as a sensual goddess, an intimidating empress, a fierce queen, and so much more.

The narratives behind her paintings reclaims the ideas of black girl magic by envisioning herself as an intergalactic, otherworldly black female entity. “My work is an abstraction of self—an obliteration," Viktor says in an interview with OkayAfrica. “...Those portraits, whether viewed as me or not, are an act of defiance, and in there lies something that is empowering. It controls the gaze—demands respect."

Considering the stereotypes attached to black women—hypersexualization, fetishization, misogynoir, the angry black women—Viktor's worlds negate these notions and pursue a more enlightened, uplifting narrative that's been echoing in our inner ears for centuries: black women are magic, dripping in gold.

Viktor's Afrofuturism is timeless, empowering and bold. One look at her dreamy, stylish images and we are transported into a world where curves, confidence and brown skin reigns, and where gold is an element used to evoke emotion, tell stories and symbolize our royalty—exactly what our ancestors would have wanted.

Watch Lina Iris Viktor speak on the misconceptions of blackness in art in this video and keep up with her on Instagram here.