What it Means to be an African Migrant Deported From Israel 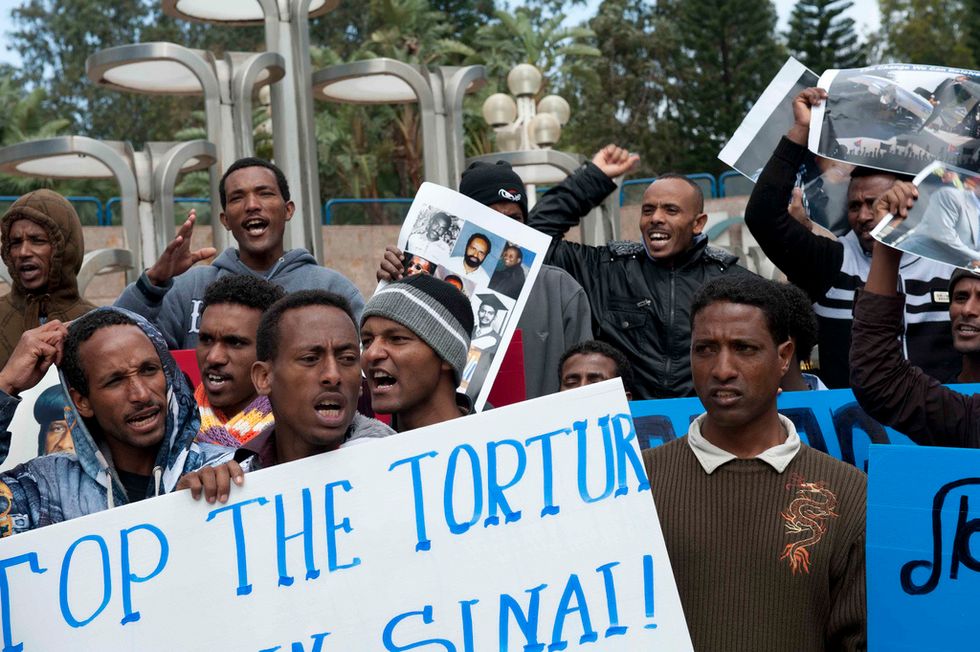 Protestors in Tel Aviv via Physicians for Human Rights on

An Eritrean asylum seeker tells us about life after deportation from Israel and what he'd wished he'd done instead.

Meles Ghirmay remembers every moment leading up to his deportation from Israel.

"I was hopeful and thinking that they would give me a visa," the Eritrean asylum seeker says softly over the phone from Kampala, Uganda.

"On the spot, they told me I have to leave and I was given no option. Just sign and go," Ghirmay recalls. A week later, he was on a flight to Uganda.

"I don't have any documents to be here," he says about his new home. "When I got here, I was escorted by an airport worker and my documents were taken. I don't know what they did with it." All assurances given by the Israeli government were false, he says. "They promised they would take care of me and it was nothing like that—I don't have any hope here."

Every morning at 8 o'clock, Israeli immigration officials in Tel Aviv are met by long lines of African migrants, mostly teenage and middle age men from Sudan and Eritrea waiting for word on their refugee claims in Israel. Ghirmay was one of the thousands who would religiously join the lines at 4 a.m. outside the embassy in Tel Aviv when his schedule as a store clerk permitted. While some asylum seekers spent countless hours online waiting to get assistance, many eventually gave up and resorted to sitting demoralized on sidewalks nearby gazing at the line.

Ghirmay spent ten years living in Tel Aviv. He left Eritrea at age 21 to flee the brutal military regime there and its indefinite military conscription. He came to Israel thinking that it was aware of Eritrea's human rights abuses and would freely accept him. While waiting in line with his documents folded under his arm, food and water were the last thing on his mind. Going for food, he feared, would lose his position in the line. Often he would wait in line until eventually the doors to the embassy would close without warning. It was the norm he says. Asylum seekers would walk away, disappointed, only to repeat the process the following day.

After countless days in line, it was finally his turn to request a visa. In the office he was surrounded by officers who peppered him with questions about his status and his purpose in Israel. They told him his claims were fabricated—that he wasn't in Israel because of persecution but for economic benefit. Ghirmay says that in the moment he was confused and nervous and didn't know what to do because the accusations weren't accurate. After an officer repeatedly told him in Hebrew that he must go, Ghirmay said he was given no chance to consider his options. He felt pressured and opted for the offer of $3,500 in cash and a one-way ticket to a place of uncertainty.

He is one of an estimated 4,000 migrants who chose deportation to Kampala, Uganda, and Rwanda since 2013 with a $3,500 grant and promised "a life of happiness and employment." It has turned out to be anything but.

Eritrean protestors in Tel AvivPhoto via Physicians For Human Rights

In recent days, the Israeli government has been zigzagging on its decision to deport or imprison its unwanted residence. Recently Prime Minister Benjamin Netanyahu struck a plan with the U.N.'s High Commission on Refugees (UNHCR) to relocate 16,000 migrants to western nations. After making the plan public, he scrapped it because right-wing politicians feared that thousands of migrants would still remain in Israel.

At the top of the year, parliament issued an order that asylum seekers choose indefinite imprisonment or accept a $3,500 grant and a one-way ticket to Uganda or Rwanda. Both countries in the past have denied claims that they accepted a proposal from Israel to take in hundreds of Africans Israel wishes to deport. Just days after Israel canceled its plans with UNHCR, Uganda announced that it may take in 500 asylum seekers.

Israel's deportation plans have sparked a backlash of ongoing protests and discussions. Rights groups have challenged the deportation order and brought it to Israel's Supreme court which issued a temporary injunction which allowed petitioners to fight against the plans. Groups like Hotline For Refugees and Eritrean Community Center are outspoken about the stance they take on this issue.

"Once migrants opt for voluntary departure, their lives are in constant danger," Dror Sadot, the spokesperson for Hotline for Refugees and Migrants says. "They are exposed to arrest and so they need to take cover at all times and hide because it's like another asylum journey."

The African Refugee Development Center estimates that there are approximately 40,000 Africans in Israel who considers themselves asylum seekers. Israel contends that they are economic migrants looking for opportunities. Only eight claims were approved between 2009 and 2016 according to Israel's Interior Ministry.

Eritrean protestors in Tel AvivPhoto via Physicians for Human Rights

Life as a Deportee

It has been three months since Ghirmay has been living in Kampala. With no job and fear of possible arrest, he spends most of his time in his one-room flat he rents for 200 Ugandan Shillings per month. His daily activities are at times repetitive and nevertheless, predictable. He's up at 7a.m., buys breakfast then stays in bed throughout the day. He has become frugal with his spending and fears how rapidly his grant will finish. Sometimes, he goes to bed famished.

"I don't know how to survive here and the government doesn't even know who I am or where I am staying," Ghirmay said. "I fled from my country to save my life but until today, I don't save my life. No work. No hope. No nothing."

Making friends for Ghirmay is a challenge because of the language barrier. He said he misses his friends and family. He spends most of his alone time reminiscing about a flourishing job he once had as a clerk at a supermarket in Tel Aviv for two years. It came to a halt when his once kind and caring boss took notice of the "Infiltrator's Law," issued by the Knesset, Israel's parliament which paved the way for forceful deportation.

"The good thing is that I saved my money from work and that's what I'm now using with the balance I received from the government," Ghirmay said.

He implores migrants who are stuck in limbo to choose indefinite imprisonment instead. "Learn from my mistake, there's nothing here," Ghirmay said. "No one gives you food or job and the language is a challenge. People here are poor and they are also looking for help from me," he warned.

Now, he worries about his family he left behind in Eritrea. They haven't spoken since he fled to avoid military conscription. "They don't know where I am and what I'm going through," he said. "They're still thinking I'm in Israel and it's not good for them to know because they will worry."

Regardless of the status-quo, Ghirmay is planning his next move to Europe and is hopeful of finding happiness and safety. With little information of getting from Point A to Point B, he relies on word-of-mouth for help and guidance.

"I hope to reach there, God knows," Ghirmay said followed by a sigh. "If I don't reach, that is life. If I reach, thanks to God."